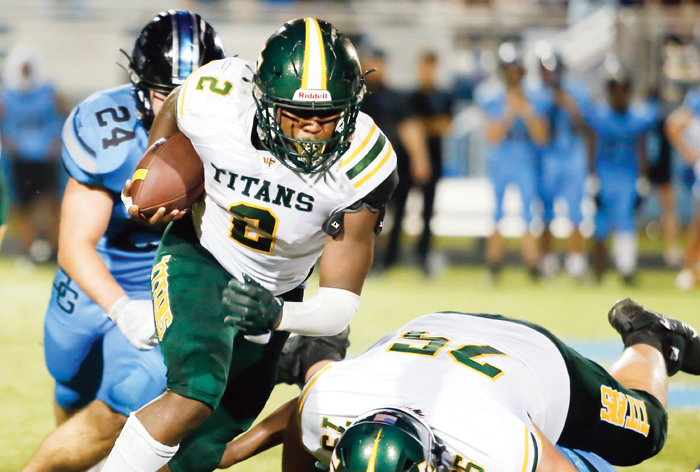 MIDWAY — West Forsyth played a rare Thursday night game against Oak Grove, and it turned out to be Jevante Long show.

Long, a senior running back, rushed for 275 yards on 23 carries and a touchdown as West Forsyth defeated Oak Grove 37-20 at Oak Grove High School Stadium.

Long was part of a dominating rushing attack for the Titans (2-0), who finished with 309 yards on 38 caries. The Titans had 414 total yards. The Grizzlies (1-1) had 366 total yards, including 14-of-28 passing for 237 yards by sophomore quarterback Connor Creech.

“I think I played a good game,” Long said. “(It) was way better than last week (against A.C. Reynolds). All-around, we were executing well. Shout-out to my O-line…They really helped me get through the game.”

Sean Joyce, who is the offensive coordinator for the Titans and one of the two acting coaches, along with defensive coordinator Jonathan McIntosh, while Head Coach Adrian Snow recuperates after being released from the hospital this past Tuesday after having COVID-19, had a glowing review of Long’s play.”

“The kid’s amazing,” Joyce said. “There’s times where he looks like he’s dog-tired, then you hand him the ball again and he drags another 15 (yards) dragging some more people behind him.”

Oak Grove had no answer for Long.

West Forsyth took the lead on its second possession of the first quarter after Braelen Morris caught a 14-yard touchdown pass from quarterback Chris Van Kleeck to help take a 7-0 lead with 6:51 left in the first quarter.

Long tacked on a 22-yard touchdown run just 1:07 later after Oak Grove went three-and-out to extend the lead to 14-0.

“I feel like I’ve got the advantage over everybody,” Long said. “Ain’t nobody play running back like me. So, every time we step onto a field against a good team or a bad team, I feel like I’m going to produce no matter who’s on the other side of the ball.”

The Grizzlies picked up some momentum late in the first quarter. They took possession at their own 43 with 2:13 left. They went on a 10-play drive and scored after Aiden Daugherty nailed a 26-field goal with 11:19 left in the second quarter.

The Titans answered on the ensuing drive after Alejandro Morillon smacked a 50-yard field goal with 8:56 left in the second quarter to make it 17-3.

“I thought in the first half we didn’t play well,” Holcomb said. “We played a little bit intimidated at times. They’re a good football program. I mean, they’re a good football team, and all of our kids, they know about them. But I told our kids for us to get program-wise where we want it to be we’ve got to play teams like this. I mean it doesn’t do us any good to play somebody else.”

With 6:58 left in the second quarter, linebacker/running back Mack David of the Titans walked off the field with a knee injury and didn’t return. Later in the game, linebacker Avery Salerno went out with a shoulder injury. No update was available on him.

“Nothing serious, not at all,” Joyce said. “He’s good to go. Just precautionary. Hey, we’re good. I think we were up (two) scores at the time when it happened, and just said, ‘Hey, just rest. Everything’s good.'”

The battle of field goals continued after Daugherty kicked a 25-yard field goal with 5:19 left in the second quarter to make it 17-6.

“We’ve got to make sure we can’t keep kicking field goals,” Holcomb said. “I mean, it ain’t gonna work. We gotta get in there.”

As the clock dwindled toward halftime, Isaiah Kimbrough caught a 33-yard touchdown pass from Van Kleeck with 6.9 seconds left to help make it 24-6.

“Any time you have as penalties as we had, you can’t be real happy about it because that tells us as we’ve got a long way to go,” Joyce said. “And it’s not a physical thing. It’s more of a mental thing. I think that’s what frustrates me the most.”

Long owned up to the mistakes.

“I think we need to be more disciplined,” he said. “We need to understand when somebody’s breaking a long run, whether to block or to not block. I think on the defensive side, I think we’re going to be all right. Hydration tonight obviously that big of a problem.”

The penalties hurt West Forsyth, as well as a fumble by Van Kleeck on a pitch. The play of West Forsyth was stark difference from how crisp it played in the first game against Asheville Reynolds 37-7.

“I think we took a step back,” Joyce said. “I think offensively, we took a step (back) just because of the mental mistakes. Last week, I think we played better up front. But we had some holding calls on the perimeter. We had several holding calls in the interior. I think we had two fumbles — I think Tay (Long) fumbled one (and recovered) and the pitch was a fumble.”

The penalties and the turnover allowed the Grizzlies to stay in the game.

“(West Forsyth) definitely hurt themselves a couple times,” Holcomb said. “I’d like to attribute that to our guys from playing hard in being in position, and having to cause some of those penalties to be made.”

Oak Grove was moving the ball on its first possession of the third quarter, but Creech, a sophomore, threw an errant pass that was intercepted by Don Robinson of West Forsyth at the 25-yard line. Robinson scampered 75 yards to score to help extend the lead to 30-6 with 4:49 left in the third quarter.

“He’s awesome,” Joyce said of Robinson. “He’s one of our best players — a great DB. He’s always bringing the energy and level. We expect him to do that every game. That’s why he’s back there to make those plays.”

The Grizzlies scored after Ethan Yarbrough ran in from 6 yards on an end-around to help slice the lead to 30-13 with 3:58 left in the third quarter. However, the Titans answered with 5:56 left in the fourth quarter after Morris caught a 15-yard pass from Van Kleeck to help push the lead to 37-13.

Oak Grove scored the final touchdown after Josh Yokeley came across on an end-around and took a direct snap from center and scored on a 1-yard run with 1:39 left to make it 37-20.

West Forsyth also received good news off the field earlier in the week after Snow left the hospital this past Tuesday after battling COVID.

“But the whole week of preparation, obviously it was a short week. We’ve got heat, having to wait and practice late in the evening. (Wednesday), it made it to where we could only have a walk-through. But even with that being said I felt like our guys were focused, and we just got to make sure we clean it up.”

The happiness with Snow coming home clearly affected the players.

“I feel like we have a little more hypeness than we did last week,” Long said. “I feel like we know Coach Snow’s at home. We’re the away team. They were talking all that junk all week, and we came to their school on Thursday night, and we got them on their own turf.”

Holcomb and Snow are very good friends from Holcomb’s days as a coach in the Central Piedmont 4-A when he was the head coach at North Davidson. Holcomb was emotional speaking about Snow’s battle with COVID-19.

“I miss him. I missed him tonight on the sidelines,” Holcomb said. “He scared us all and I know it scared him and his family. He’s a great human being. I know everybody talks about football, and he’s a great human being. His family’s top-notch. And I’ve been in touch with his wife (Gina) the whole time through this whole thing, and I FaceTimed him on Sunday, and talked to him again (Wednesday) night. He just texted me and I just texted him back. He’s one of the good guys.”

Joyce is looking forward to Snow coaching on the sideline.

“When Adrian Snow steps back on campus I may take the next five days off and let him just take care of all of it,” Joyce said.

It is uncertain as to whether Snow will coach next week when West Forsyth travels to Weddington to play its final nonconference game. Weddington played at home Friday against Charlotte Providence Day.

“I feel like we need to clean all (the mistakes) up because let’s be honest, next week Weddington will probably be the best, and I don’t mean any disrespect to anybody we’ve played so far, but Weddington’s going to be the best team we’ve played,” Joyce said. “And then it’s on to the gauntlet. It’s on to conference and everybody knows what the CPC’s like.”

West opens season with win over Asheville Reynolds at…