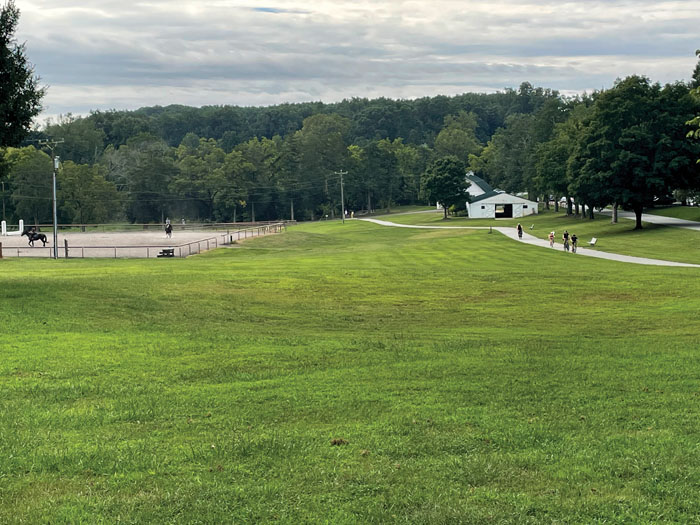 This is a view of the recommended site in Tanglewood Park for Forsyth County’s proposed 50,000-square-foot, agricultural multi-use event center. Photo by Jim Buice, For the Clemmons Courier

The project, which has received strong opposition from Clemmons for reasons including increased traffic, concerns over property values and changing the tranquil character of the park, has been mostly staff driven up to this point, but that is about to shift to the county commissioners, who ultimately will have the final say on what happens.

After getting word on the center possibly coming to Tanglewood, the Village of Clemmons put together a committee of council members Michelle Barson and Mary Cameron to reach out to the commissioners to see where things stand.

There was nothing new to report in the last council meeting on Aug. 23, so who better to get a take on the project as it now stands than Dave Plyler, who is chairman of the Forsyth County Board of Commissioners and was first elected to the board in 1994.

What was intended as asking Plyler some basic questions turned into a lengthy conversation covering a wide range of topics related to the proposed “equestrian” center, Tanglewood and opposition to the project — along with other thoughts and observations — condensed into highlights in a Q&A format with answers from Plyler.

Q: From a commissioners’ standpoint, where do things stand with the project coming to Tanglewood?

A: At this point, they haven’t made a final decision, so therefore we’re pretty much right where we have been. The voters, and what’s surprising to me to be honest with you, is most of the people that I’m hearing from are saying, ‘you kept this a secret, you didn’t tell us anything about it,’ but my God, it was put before the voters (in a 2016 bond referendum) and they approved it.

Right now, we are, frankly speaking, the staff and the county, which includes the county manager leading the charge, and I do think what we have here is a situation that we can remedy. But I’m not sure it is going to satisfy, as Abraham Lincoln said, ‘all the people all the time,’ but at this stage it’s a little more complicated than it’s being made out to be. Most of the emails that I’m getting, and if I’m getting them, most of the commissioners are getting them, say it’s going to disturb the birds, it’s going to disturb tranquility, but what most people don’t know is we are subsidizing the park to the tune of $800,000 to $1 million a year. Now if that doesn’t bother you, that’s fine, but the rest of the county is paying for the benefit of the people who live on your side of the county.

The other thing is at least six years ago we were looking at Tanglewood being known for horses because Mr. Reynolds was a horse man. Part of the thing that kind of concerns me is emails I’m getting reflect a lack of knowledge for what’s going on. For example, one email said that the Reynolds family gave this property to Forsyth County. What they don’t know is Reynolds did not give it to us. We bought it from the foundation for $6.5 million. 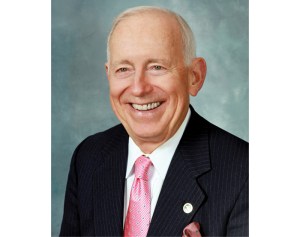 Q: On the wording of it being described in a county handout given to those attending one of the public information sessions as “an agricultural, multi-use center” in the county’s parks and bond proposal…

A: It first started out as an equestrian center and somewhere down the line it became an event center, and that does make you think of tractor pulls. It evolved from one thing to another. If you think we’re going to have tractor pulls out there, I’d shoot myself before I did that. If you’re going to call it an agricultural center, to me agriculture means growing agriculture products, and there ain’t no product out there being grown for profit or for loss anywhere, and it’s never been. So if that’s a farm, show me where we’re doing our agriculture work outside of flowers.

My feeling is the county is ready, willing and able to do whatever the people say. We’re listening. And this survey that Dudley (Watts, county manager) is conducting through the internet, if it comes out with pretty strong feelings, we’ll probably just walk away from it, and nobody has anything to argue about.

In the long haul, what I’m thinking of is the next 40 to 50 years we want that park to still be there and still being able to produce what it can produce.

Q: On the money side of things…

A: When we were building the (Idols Road) business park out there, we put millions of dollars into that and why did we do that — because we could get more jobs and do our economy a lot better in this market than we could anywhere else. By the way, Davie County was behind that. One of things we were doing out there was help them with their water supply, which they’re having difficulty with and they didn’t have the money to do it, so we said, OK, we’ll do what we can while we’re doing all this stuff, and the next thing you know a group of people, I’m not saying which group — who doesn’t like that and doesn’t want anything out there — said we don’t want it, so that multi-million project has gone away. Now I think what is going to happen is this multi-million dollar project is going to go away, and it’s all going to stay that way until somebody wakes up and says, well, why haven’t we done more with the park than we could have done?

As far as I am concerned, if you’re going to buy that park and spend $6.5 million on it and expect it to survive by itself, you’re out of your mind.

A: It doesn’t change the fact that we’re in a nonprofit situation and we’re not out there to make a profit. This is a nonprofit facility that requires a million dollars a year to keep it up, including salaries, maintenance and everything else. What we’re trying to do here is to bring a little more shine and glisten to what is already known as a horse place, which is kind of in the minor leagues. The major leagues are places like Raleigh, where they can do stuff like that and bring high-class events for horses. There’s no place else you can go in this county. The most logical place would be Tanglewood.

To take it one extreme further, what if we said, what we’re going to do is just pull out and sell the park of 1,400 acres to a developer, and he can do with it whatever he pleases. By the way, we’ve got the authority to do that.

Q: One of the things he has heard:

A: A lady came in and told me her backyard backs up to the barns at Tanglewood. For her to have her house back up to that, she’s got to come all the way to Tanglewood Park through the entrance and go about a half mile down the road. But if you read that in the paper, you’re thinking, my God, her house is right next to Tanglewood. Then on top of that, the next story that is coming out is everybody’s home value is going to drop dramatically. Well, now look, if that’s the case, why don’t we just drop the Festival of Lights at Christmastime because if they haven’t dropped now, they ain’t going to drop.

Q: Other options to locate the park…

A: We already have other several areas in Forsyth County who are ready, willing and able to take that money. There’s a place in Kernersville called Ivey Redmon Park, which about five miles outside the city limits with open space, and then there’s Triad Park, which, by the way, is in Guilford County. We have a deal with Guilford County. They pay 50% of everything we do at Triad Park. So if we want to build something, the commissioners have to agree on it and pay 50% on it, which means everything is half-priced for both of us. And it’s well located for all of us because it’s near the airport. I’ve talked to the mayor of Kernersville, Dawn Morgan, and she said bring it on. It could be an event center, but that’s not what we’re selling. We’re talking about an equestrian center, which is unique, and it’s for horses, and if everybody doesn’t want horses that much, we don’t have to do it. But it would make us unique in this area.

Q: What could help make the project happen at Tanglewood?

A: We need to spend our time in a more progressive, more thoughtful way, and that’s not being done now. It’s being done with politics or falsehoods and that kind of thing. If I was the group opposing it — the business park gone and this is going to go —  a thoughtful approach to it would be to say we’re going to do this, but we want an oversight committee to make sure that the design and this and that — I know we have elected officials — but we want to have a say so since this is in our community and work together on it. And if you don’t like it, rather than chuck the whole thing, if you’re going to do it, let’s do it right. I think that would really be a complement for the community, for the county and would improve Tanglewood and would take all these stories away. I think that’s the only way it would work under the circumstances. I would be 100% in favor of that.

Clemmons has people in the community that are proud of the park because they consider it their park and are very interested in how it is run and the shape it’s in. But we’ve have never had any regular scheduled meeting with the City Council or anyone in Clemmons on how the park is run. We need to get the lines of communication open. I’d love to hear from them.

We’ve got $5 million to spend, but if we have to, we’ll pull the plug and say it’s over. Dudley was right. If you don’t want it, you ain’t going to get it because we’re not going to put it there. But that’s not the way people are coming at us. They are coming at us, like, if you do this we’re going to die, or an atomic bomb, that kind of thing. Nobody ever said, look, we want this to work as much as you do. Give us a chance. Let’s see if we can’t work this out to where it will work for all of us.