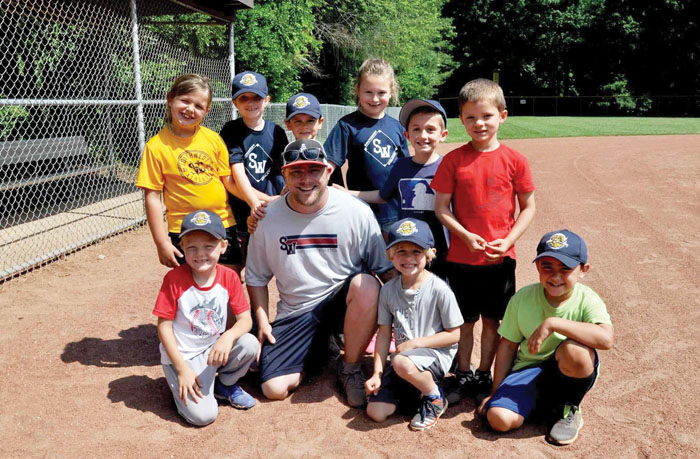 Adam McCabe with his team from last season that he had for three years with the USA quickball league.

Adam McCabe grew up in New Jersey as the oldest of two sisters and a brother. McCabe enjoyed playing sports like baseball and hockey because of the camaraderie and team environment. “My family moved down to North Carolina in 2006, and I really spent most of my time outside of high school working to make money instead of focusing on sports at that point,” reflects McCabe.

McCabe appreciated the sense of accomplishment from an early age of making money and being self-sufficient. “I went to Davidson Community College thinking I wanted to be an English teacher because of how much I wanted to work with kids and make a difference in their lives. However, when I got a job working at Genesis Bolt & Supply part time, I realized I was making good money, and it could help provide an opportunity to start a career that would be good for me,” reflects McCabe. “I’m glad that I went to Davidson Community College though because one of my teachers introduced me to my future wife, Jennifer. She approached me after class and said she thought I would be a good fit for her daughter, and I was shocked because I was a bit of a class clown and jokester. I am so grateful that she knew we were a good match.” When Jennifer graduated from college in 2011, she and Adam were married after dating for three years.

Jennifer’s family recognized how much their new son-in-law enjoyed working and was good with people. They offered him a part-time job at the Bowman Gray Stadium where they run the racetrack. “I started in 2012 working out there on Saturdays. I help with selling the pit passes. I also stage pictures for the winners in the winner circle and incorporate the sponsors too. It’s been a lot of fun and I have really enjoyed it,” explains McCabe.

Adam and Jennifer added another adventure to their lives when they became parents with son, (Hayden) and daughter, Kara (5). “I’ve always loved kids, but I was nervous I wouldn’t be good with discipline because I loved them so much. It’s truly the most incredible experience, and I feel so lucky to have Hayden and Kara in my life. When we found out we were pregnant with Kara I was worried it wasn’t possible to love her as much as Hayden, but your heart expands, and you have this love. It just happens,” says McCabe.

McCabe has relished being active in his own children’s lives too. With an athletic background and love for baseball, his talents were quickly picked up for the USA quickball league in 2018. “I was approached to be on the board of directors out there and became the division director of quickball which is a volunteer position. Quickball is for girls and boys at 4-6 years old and is different from T-ball because you’re trying to throw to them instead of using the tee. It is helpful for the kids’ hand-eye coordination and parent support has made it so much fun for them,” reveals McCabe. “What I like about quickball is it does help the kids that may not be naturally athletic develop the necessary skills they need to be able to eventually play baseball.”

Our neighbor recognizes that helping the next generation learn what Babe Ruth once noted, “Never let the fear of striking out keep you from playing the game.”