No event center for Tanglewood 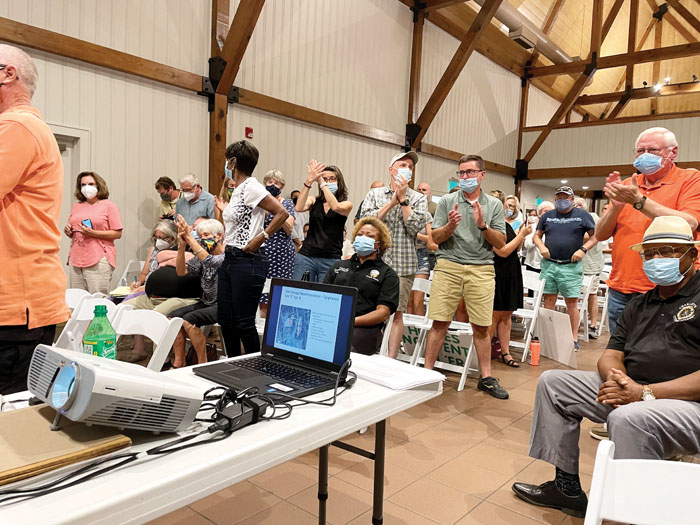 A large crowd had plenty to say and lots of reactions in last Wednesday night’s community meeting. Photo by Jim Buice, for the Clemmons Courier.

Dudley Watts was true to his word.

When the Forsyth County manager came to the Red Barn at Tanglewood nearly two months ago for a public input and Q&A session regarding a 50,000-square-foot agricultural multi-use event center proposed to be built in the park, he said that the county wouldn’t build it if Clemmons didn’t want it.

“We will not put it here if you don’t want it here,” Watts said that night to thunderous applause from a vocal packed house overwhelmingly opposed to the project. “If this community doesn’t want the facility, I don’t believe the county commissioners would put it here.”

Another public input session followed in early August at the Forsyth County Government Center along with an online survey on the county’s website that concluded Sept. 12 showing a solid majority of the participants being against having the facility at Tanglewood.

Watts then made the announcement during last Thursday’s meeting of the Forsyth County Board of Commissioners that the county was no longer considering Tanglewood as the proposed site and would start looking for another location in the county.

“Obviously, the public input sessions were pretty vocal with a lot of emotion and so I heard it, but we just wanted to validate it with some survey results,” Watts said. “It was not viewed in keeping with what the community wants out there, and Clemmons is so fortunate to have so many people who care so deeply, and they want things to stay the way we were.”

More than 2,000 people participated in the online survey, and 82.8% voted against the event center being located at Tanglewood. As for those in favor of having the event center in Forsyth County, the vote was 54.3% answering the question with a “yes” vote.

The proposed $5 million project was part of a $15 million County Parks and Recreation Bond passed by voters in 2016. Those dollars were to be committed to the design, development, planning and construction of an agricultural multi-use center located within an existing Forsyth County park — with the exact location to be determined.

In November 2020, county officials proposed a site at Tanglewood for the facility, but many were unaware of the news until a story in July in the Winston-Salem Journal reported that the county was considering a big event center there — located near the horse stables in the park — that could be used for concerts, expositions and other events.

Even the Clemmons Village Council stated in a meeting after that news came out that they “didn’t know what was going on” with the project. In addition to the council forming a committee to find out what exactly what the plans were, local opponents created a website, Save Tanglewood Park, and posted ‘WE WON!’ on the group’s Facebook page after last week’s announcement.

The assumption was that the project would shift after the survey from being staff driven to being taken over by the Board of Commissioners, who would have the final say.

Dave Plyler, who is chairman of the Forsyth County commissioners, seemed to be on the same page as Watts when he told the Courier prior to getting the survey results: “Dudley was right. If you don’t want it, you ain’t going to get it because we’re not going to put it there.”

But it never got to that point. Watts explained why.

“It really never got to the board level as an action item,” he said. “I take projects to the board based on a manager’s recommendation, and essentially what happened is after the community came out so vocally against it, and the survey validated it, my management recommendation changed.

“A little bit of misinformation got out there, and I probably could have done a better job of selling it, but things always work out, and I think wherever we put it is going to be a good location.”