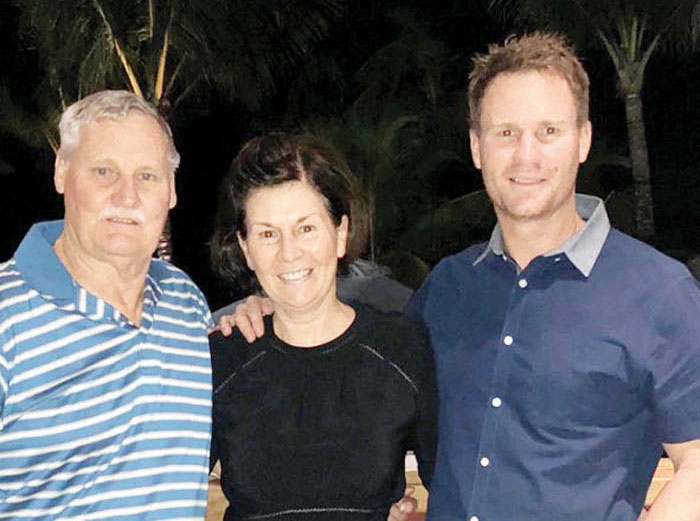 Shane Maullin with his father, Stan, and mother, Enid.

Growing up in Johannesburg, South Africa, Shane Maullin had a close-knit family including a younger brother that was very active. “My mom would call us in the evening after playing outside with friends all day long. We didn’t play video games back then or stay on our iPads, we were playing soccer, riding BMX bikes, and lots of other sports,” recalls Maullin. In high school, Maullin continued his athletic path and played sports varying in cross-country, soccer, water polo, cricket, baseball and rugby, just to name a few. “Soccer was my favorite sport, but I did enjoy all of them,” reflects Maullin. “My friends and I would get to school an hour early in the morning so that we could play soccer prior to school starting at 8 a.m.”

When Maullin graduated from high school, he was required to join the Army. “It was mandatory for all white males to join the Army prior to Nelson Mandela becoming president, which I did at 18 years old,” explains Maullin. He went to basic training and served his country as a police officer for four years. “There was a lot of political unrest, and we had to attend riots and marches to keep people safe,” says Maullin. “As an 18-year-old witnessing the terrorism, bombings, and anger behind the large crowds, it was quite an experience that took a toll on you.” Maullin then worked in investigation as a detective. “The government started to change. The new government took away the benefits that helped equalize the level of danger you experienced. We lost our housing subsidy and education stipend. Three of my friends were ambushed on a call that they had taken and were killed.”

Maullin didn’t completely avoid an element of danger at his next position where he was responsible for private investigative work for a company that needed protection from a theft ring. “I was working for a retailer similar to Nordstrom and Saks Fifth Avenue, and we were able to protect them from having their products stolen in total of about $6 million,” explains Maullin. He spent six years in this field, before realizing he wanted to immigrate to the United States. “They called it the brain drain in South Africa — there was a mass exodus of doctors, lawyers, accountants, and other fields because people were immigrating to New Zealand, Australia, England, and America in 2004. People with young children were also leaving. My brother had left in 1990 to play soccer in college, and never came back. When I was carjacked at gun point, that was the final straw for me. I didn’t feel safe in my home country and with the uncertain political climate after Nelson Mandela passing, I decided to leave,” explains Maullin.

After 31 years in South Africa, Maullin moved to Austin, Texas, to attend the University of Texas. “The exchange rate was 17 to 1, so the currency was very weak. I had to sell my house in South Africa, and it was only enough to pay for one semester of schooling. It took me five years to graduate because I had to work multiple jobs to pay for my degree. As an international student, I could only work 18 hours a week, so I had to make it count,” says Maullin. He also immersed himself in the community running for student council president which helped him earn a scholarship, and even became active as a youth pastor at a local church. The hard-working Maullin graduated magna cum laude and debt free. Eager to teach and make a difference, Maullin headed to Atlanta, Georgia. “One of my roommates had moved there and said it was a nice place to live. I taught in a Title I school for seven years,” mentions Maullin.

Maullin was excited when an opportunity presented itself in 2018 to move to the Winston-Salem area to be closer to his brother. “He was a soccer coach at the University of North Carolina at Greensboro and learned of an opening to coach soccer at Reagan High School,” explains Maullin. “I began teaching life management skills and physical education at Reagan, too. I coached the junior varsity and varsity girls teams and the varsity boys teams,” notes Maullin. The girls varsity team went the furthest in Reagan history to the semi-finals state champions under Maullin’s tutelage. “Our starting goalie got injured during warmups at the game, and it definitely impacted the outcome,” says Maullin.

Maullin had to take a hiatus after coaching at Reagan for two years because of his father’s health. “My dad developed prostate cancer, and I wanted to be able to be there for him as he underwent treatment. The cancer is in his bones and lymph nodes, and I wanted to support him as much as I could,” explains Maullin. His parents immigrated to the United States four months ago. “It’s been a hard transition for them. They were in a country for 75 years, and the cost of living over there with health insurance, especially for my father’s care has been a huge challenge. They used to go to the gym together, grab coffee every day together, and now things are so much more expensive for them here. They are going to go back to South Africa because of how hard the transition has been both emotionally and financially,” says Maullin.

Maullin’s outlet and love for soccer has helped through the tough times of watching his dad fight cancer. He went back to coaching at Summit School for the sixth- through ninth-grade soccer teams. “Teaching life skills through sports is meaningful and something that I enjoy doing. Soccer is a great sport, and I enjoy seeing the children learn both on and off the field,” explains Maullin. “I will even referee games with N.C. Fusion for their tournaments in Charlotte and Raleigh because of how much I like being able to be there to help facilitate those teachable moments. Kids deserve to have adults in their lives believe in them.”