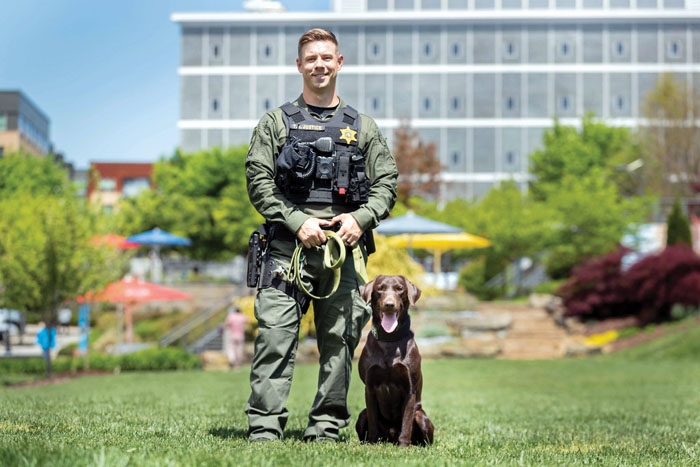 Hondo is a person-borne detection K9, trained only to detect firearms and ammunition. He detects the presence of these odors, whether they are static or moving, and then trails the odors back to their source (e.g. in a locker, on a person, in a backpack). Hondo is a 2 year-old chocolate lab and the newest addition to the FCSO K9 Unit, being sworn into the FCSO family in April of this year. Hondo and his handler Deputy Justice, are assigned to the School Resource Division. Justice has spent more than half of his law enforcement career in the educational setting.

“It is unique to have a K9 that is trained only to detect firearms and ammunition. But K9 Hondo is unique — he is an investment solely in the safety of our students. He is a progressive, alternative solution to the challenges we are facing. While K9 Hondo can only be in one place at a time, we are deploying him strategically throughout our schools.” Sheriff Bobby F. Kimbrough Jr. said.

Hondo is an investment in the continued safety of our community, especially as it relates to the community’s most vulnerable residents, the children. The majority of the FCSO K9s are considered “patrol K9s,” meaning they are certified in multiple disciplines such as narcotics detection, tracking and trailing, and criminal apprehension. Hondo is only trained to detect a variety of firearms and ammunition.

When not actively working to detect firearms and ammunition, Hondo is exceptionally friendly and enjoys ear scratches and the occasional treat. Students who see Hondo are encouraged to talk with Deputy Justice and get to know the pair.