Week off: West sees game against Parkland canceled, looks ahead to matchup against Glenn 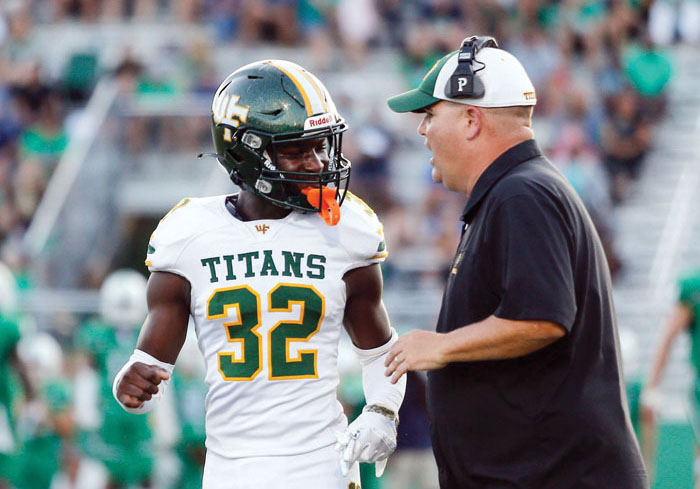 For the Clemmons Courier

The West Forsyth football team had an unexpected week off last week, and it was through no fault of its own.

The scheduled Central Piedmont 4-A game between West Forsyth and Parkland at Deaton-Thompson Stadium was canceled.

Coach Adrian Snow of West Forsyth wouldn’t comment on the cancellation because it was Parkland’s home game, and Parkland was the one which canceled the game. Reached for comment, Athletic Director Linwood Jerald of Parkland said he couldn’t comment on the cancellation, but he did say that he called Winston-Salem/Forsyth County Schools and Athletic Director Mike Pennington of West Forsyth the middle of last week to tell them the game had to be canceled.

Snow said he tried to play a game against a nonconference opponent, but he said he “swung and struck out four times.”

West Forsyth was just off three weeks ago, following the Weddington game.

“We prepared just like normal, and we were ready to play,” Snow said. “At this point, we didn’t. At this point we’ve moved on, and Glenn’s up and that’s what we’ll do. We’ll try to prepare for them and do the best we can, and see what happens.”

West Forsyth used the idle week after the Weddington loss and defeated Mount Tabor 36-14 at home two weeks ago in the conference opener.

Indeed, West Forsyth (3-1, 1-0) will play host to Glenn (3-1, 2-0) Friday night in a battle of the two remaining teams without a conference loss. Glenn played at Reagan last Friday and defeated Reagan 33-13. Since West Forsyth didn’t play Friday night Snow said he had a chance to go to the Glenn at Reagan game to scout both teams, which just happen to be West Forsyth’s next two opponents — both of which are home games.

“They’ve got guys that run around and enjoy hitting people,” Snow said. “They’re really good. They’re long, they’re athletic. They do a really good job, so it’s one of those things where we’ll have to be ready to play and hope that our kids will be up for the challenge. I feel like they will. And we’ll see what happens.”

Chaney Fitzgerald was the offensive catalyst for Glenn, rushing for 133 yards and two touchdowns on seven carries, and he also had a receiving touchdown. Levine Smith also tacked on a 68-yard touchdown run, and William Slater had a 2-yard touchdown run.

Quarterback Camden Coleman of Glenn, who has missed the last couple games because of injury, could possibly play on Friday.

“They’ve got a talented bunch on offense,” Snow said of the Bobcats. “…(Coleman’s) a talent player. He does a really good job. He’s going to be fit to be tied because he’s not played in a couple weeks. They’ve just got some guys that can really run well. They’re really good athletes and I know they”ll be ready to play.”

West Forsyth and Glenn and have been two of the power teams within the conference since Glenn joined the Central Piedmont 4-A during the 2017-18 academic year.

“We’ll have to play well,” Snow said. “I hope our kids will be excited to play, which I know they will. So, it’ll be one of those situations that it’s a cool chance to play. And we’ll go do the best we can and see what happens.”

Glenn has risen to the level where it is one of the teams which could challenge for the conference title each season with Coach Antwon Stevenson.

“When you’ve got good teams, in all of the league, it helps,” Snow said. “You’ve just got to be ready. And Coach (Stevenson) has done a great job there. He’s got those kids to believe, and they’re playing well, and they do good things. You’ve got to be ready to play.”

After the Glenn game, West Forsyth is scheduled to play Reagan at home next week, before it travels to Mocksville on Oct. 15 to face Davie County.

“Anytime you get to play at the house it’s a good thing, in front of our fans,” Snow said. “We’ve got a good fan base and do a great job, come, they’re excited. So, it’s a good thing. So, anytime you play at home it’s positive. We’ll look at it that way and we’ll go from there.”

“It’s a great league. There’s no doubt about it,” Snow said. “We’ve got a bunch of good players, got a bunch of good coaches. and they do a really good job. And you’ll have to be ready to play. You just take it one game at a time and see what happens.”

“I think ultimately we’ve got to get better at throwing the ball,” Snow said. “We’re getting there. But I think offensively when you’ve got three guys that can tote it, it helps out. There ain’t no doubt about that.

“And our kids up front up are continuing to get better. It’s a big team atmosphere. Our wide receivers know that if they’ve got to block for us to win, they’re all in. They love catching the ball, but when their opportunity comes, they’ll be ready.”

The Titans have also outscored their opponents 117-60.

“Our kids are taking coaching and they understand the little things you’ve got to work on. Just try to keep getting better.”

“We knew we had a good bunch,” Snow said. “I feel like if we keep working and get better, ultimately, it’s a week-to-week thing. Just working, just keep getting better, and see what happens.”