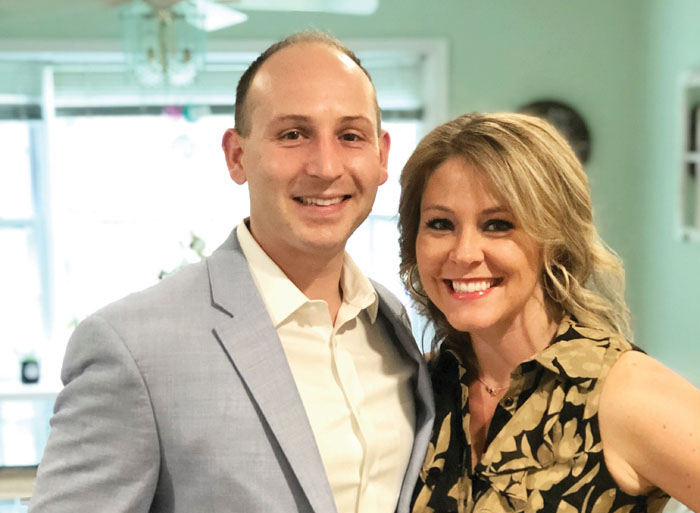 Lindsey Drew and her husband, Phil.

Lindsey Drew grew up in Winston-Salem as the middle of three children. Drew’s family was very close, and they often supported each other in their many interests and activities. “I took to playing soccer and volleyball. I ended up playing volleyball the most, and joined the Junior Olympics team for my age group in our area. We had lots of tournaments and traveled often to different games. I really enjoyed it,” reflects Drew. “I liked the competitiveness of the sport, and having teammates.”

Drew played volleyball during her middle school years and all the way through her time at Reynolds High School. “When I had to decide where to go for college, I knew that I wanted to go to a big football school. I had always loved watching football, and I applied to only SEC schools,” explains Drew. “I thought going to a big school that wasn’t too far away would help me gain a sense of independence. I was drawn to the University of South Carolina (USC) in Columbia because of their international business program. When I was in high school, I had gone overseas to Argentina for the summer as part of an exchange program. I had gotten a real love for travel and thought parlaying that with business seemed like a natural fit.”

As Drew headed to USC, she had to change gears on her major. Only 1% of the applicants that applied to the international business program were admitted. “When I didn’t get in, I was mad. I channeled that into a positive though. I ended up graduating with two majors and three minors,” notes Drew. “During my time at USC, I learned and grew a lot. I joined Zeta Tau Alpha which helped me make friends and dig into philanthropy which I found to be very meaningful with their focus on Susan G. Komen.” Drew also took advantage of getting excellent grades that allowed her to qualify for traveling abroad. “I went to Spain going into my third year of college and was able to really immerse myself in the culture. One of my majors was Spanish and I was fluent and really able to enjoy the experience. Someone had recommended that I really plan out my itinerary when I got there, and it was the best advice. I traveled to Switzerland, Italy, England, and of course all over Spain. Barcelona was incredible because it was rich in Spanish tradition and had other cultures intertwined with it,” reflects Drew.

While Drew was learning about new cultures and perspectives, she had also begun a new relationship as well. “Right before I left, I began dating Phil. We had met through mutual friends a year prior, but we both were in other relationships. We just kept running into each other even though he was at Guilford College because of our friend group, and finally we were both single. Getting to really know him while overseas was different, but it worked out,” recalls Drew.

When Drew graduated from USC, she went to Charlotte to begin her career as a pharmaceutical representative for GlaxoSmithKline. “I had briefly thought about a career in medicine. My father’s a doctor and steered me away from it because I knew one day I wanted a large family and I was worried about the hours. This allowed me to have a bit more of a flexible schedule,” explains Drew. “The person who interviewed me revealed after I had gotten the job that he had only done so as a favor to a friend. He didn’t expect me to be a really solid candidate and someone that would be right for the job,” laughs Drew. “I loved it, and for two years I really immersed myself in the industry.”

Drew only left Charlotte and her position because she had become engaged to Phil in 2009. “When we got married in 2010, I moved to where Phil was about a week before the wedding. With the collapse of the economy, my company wasn’t doing transfers so I had to start over finding a job. That was tough because I was in the top 28% in sales nationally, and had really enjoyed what I was doing,” says Drew.

Lindsey and Phil began their married life in in Louisville, Kentucky. “When I moved out there, it was tough finding a place that would allow us to have a German shepherd in a rental home. When we finally did, the landlord was trying to charge us way too much money for the place. I finally talked him down on price, and after I did he said I was such a good salesperson he wanted to hire me for a company he worked for. So, I went to work selling printers. Even though I hated it, I needed a job,” notes Drew. About a year into Drew’s new job, she learned she was pregnant with her oldest child, Tatum, in in 2011. “Luckily about six weeks after we had Tatum, Phil was transferred back to the Winston-Salem area. Being so close to my family was really important,” reflects Drew.

Although Drew was excited to be back home and was working as a full-time mom, the Drews would make many moves before finally settling in North Carolina permanently. “We added Hunter in 2013 and Annsley in 2016 to our family. And I joke that we can’t move, although I mean it because we had moved eight times in eight years because of Phil’s job from the Midwest back to the Winston-Salem area,” says Drew. “Being back home, it’s nice raising our children here near family. The kids are involved in their own activities, and a good part of my time is taking them where they need to go, and I wouldn’t trade it for anything,” notes Drew. “I’m an extrovert, so I love spending time with the families at their sporting events, and getting to know them while we cheer on and support the kids. Life is never dull. Being a parent has taught me that I can push beyond any limit, in a good way. The level of happiness that they bring to your world and joy is incredible. I always thought that we would have four kids in our family, but we are in a really good place right now. I think things are just as they are supposed to be.”