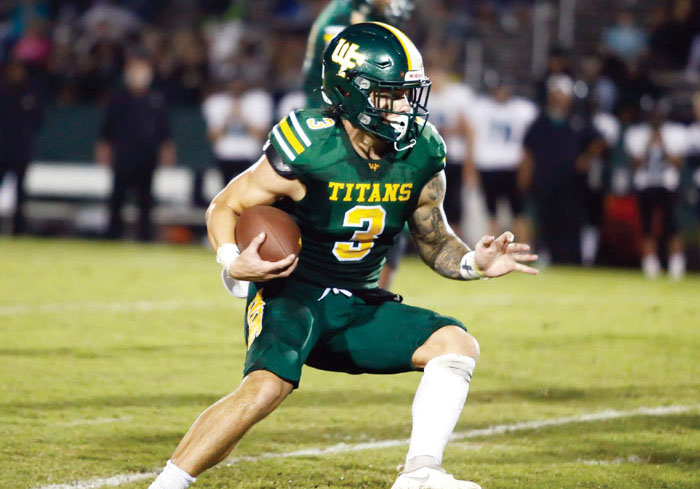 West Forsyth quarterback Chris Van Kleeck runs the ball during a game against Reagan on Friday. Photo by Brad Richard. To view and order photos, go to https://www.ncprepphotos.com/

It’s always a grudge match when rivals Reagan and West Forsyth play in any sport.

That was the case last Friday night at Jerry Peoples Stadium when the Reagan football team traveled to Clemmons to play West Forsyth in a Central Piedmont 4-A game.

Jon Gullette of Reagan rushed for 168 yards on 23 carries and two touchdowns, and Reagan’s defense was stifling, as it eked past West Forsyth 15-9.

West Forsyth fell to 3-3 overall and 1-2 in the conference with three games left in the regular season. After losing at home to Glenn (5-1, 4-0) the previous week, West Forsyth lost consecutive games at home for the first time since 2012 when it lost three straight home games against Richmond Senior, Reagan and North Davidson, and West Forsyth finished 5-6 that season.

“We got beat,” Coach Adrian Snow of West Forsyth said.

Reagan improved to 4-3 overall and 3-1 in the conference, a game behind Glenn, which already defeated Reagan earlier this season.

“It’s just one week at a time,” Coach Josh McGee of Reagan said. “It’s always about us. That’s the way we always talk about, it’s about us.”

Two plays later, the Titans capitalized on the Raiders’ mistake after Morris caught a 27-yard touchdown pass from quarterback Chris Van Kleeck with 5:50 left in the first quarter. However, the kick for extra point by Alejandro Morillon was blocked to keep the score at 6-0.

“West Forsyth, traditionally we run the ball a lot and that’s what draws a lot of attention in the box and stuff,” Morris said. “So, when they fill the box like that that’s when we have to try to challenge them up in the air. I mean, it worked sometimes and sometimes it didn’t.”

The Titans didn’t have the lead for long. With 1:08 left in the first quarter, quarterback Kam Hill of the Raiders threw an 8-yard pass to Vincent Wilkins to make it second-and-2 at Titans’ 39. Gullette scored on the next play on a 39-yard run to knot the score at 6-6 with 50 seconds left in the first quarter. Rocco Gigliotti’s kick for extra point was blocked.

“We’ve played good defense all year,” Snow said. “I mean, there ain’t no doubt about that. They gave us a chance to win and played well, and did a lot of good things. So, I was proud of our defensive guys.”

“We knew coming into this this, people asked ‘What do you think about West,'” McGee said. “It’s a typical West Forsyth football team. And that means they play really good defense, they always have an explosive back, and they don’t make a whole lot of mistakes. So, when you know that you know the things you’ve got to do well, and offensively I thought we did just enough.

“We were gritty. We were tough. Defensively, we were lights out. They scored on a double move early in the game and made that correction.”

Reagan led at halftime, but West Forsyth took the opening possession of the second half. West Forsyth started at its own 30, and after eight plays, Morillon came out to attempt a 49-yard field goal. There was a bad snap and the kick was blocked, which kept the score at 9-6 with 8:16 left in the third quarter.

Reagan took possession at its 32 after the blocked kick, and it scored nine plays later after Gullette scored on a 7-yard touchdown run with 4:24 left to help push the lead to 15-6. However, Gigliott’s kick for extra point was blocked.

“When you play these guys, you don’t ever know,” McGee said. “It’s a rivalry. It is what it is. It’s what’s going to happen.”

West Forsyth’s rushing attack, which had been so stout, led by senior Jevante Long, couldn’t ever get any traction against Reagan. Long finished with 24 yards rushing on 14 carries. Mack David had 72 yards on nine carries, and Van Kleeck had 39 yards on six carries.

“We tried to throw it, too,” Snow said. “We tried to do things where we beat them some and whatnot. You know, we just didn’t make it happen.”

Reagan was playing anywhere from eight to 11 defensive plays in the box, within 10 yards of the line of scrimmage, daring West Forsyth to throw the ball. Van Kleeck was 6-of-13 passing with an interception and 97 yards for West Forsyth.

“When you play these guys, you’ve got to stop the run,” McGee said. “So, you’ve got to have different ways to kind of load the box and take certain things away. But Long is, I told him and Mack David both, I’ve watched a lot of football in this area for a long time and they’re two of the best I’ve seen. They’re great young men, and obviously they’re great competitors.”

Despite its offensive struggles West Forsyth inched closer after Morillon kicked a 42-yard field goal with 8:27 left in the fourth quarter to make it 15-9.

Reagan punted to West Forsyth late in the game, and West Forsyth took possession at its own 36 with 3:59 left. West Forsyth was able to rush the ball on the drive, but it had fourth down on the 18 with 1:15 left. However, after consecutive timeouts by both teams, West Forsyth set up to pass.

McGee’s statement was prophetic because West Forsyth did just as he stated. Van Kleeck threw it to Morris in the back corner of the end zone.

“We were trying to throw the fade to Bralen,” Snow said. “It’s what we were going to do. But we tried to dress it up a little bit, and they made the play.”

Callahan was able to snag Van Kleeck’s pass for an interception, and he ran it back to the Reagan 24-yard-line with 1:07 left, which sealed the win for Reagan.

“I told Coach (Snow), I pretty much told the whole O (offense) I wanted the ball,” Morris said. “And they were thinking of the play design, trying to draw attention to the other side because Reagan probably knew that I was going to get the ball.

“…They were kind of a wall tonight because of the power…It was a 50-50 ball. I could’ve came down with it. It hurts, but like I learned from it. I can learn from it. I will watch that play 100 times tonight or tomorrow and I’ll keep watching it, and I’m going to keep asking myself, like, ‘What could I have done about it?’ That’s just how I feel about it. I don’t really hang my head down about it Am I disappointed I didn’t make the play? Yep. Because I hold myself to that standard, and I didn’t make that play.”

Reagan defeated West Forsyth for the first time since it won 34-20 in the second round of 2019 the NCHSAA Class 4-AA playoffs after West Forsyth had won 21-16 two weeks previous. There was no fall season last year, but in spring, West Forsyth won 28-25 in Pfafftown.

“I do not like losing to them in any sport in particular,” Morris said of Reagan. “Especially, you know how they are. It really gets under your skin when you lose to a team that, you know, played like, especially like if a lot of things could’ve went your way — just off a simple call, like a — I don’t know. It really bothers me, but I can’t look back on it forever. Being a senior now, it hurts losing to Reagan, but I can’t hang my head like that.”