‘He literally helped write the book on Clemmons’ 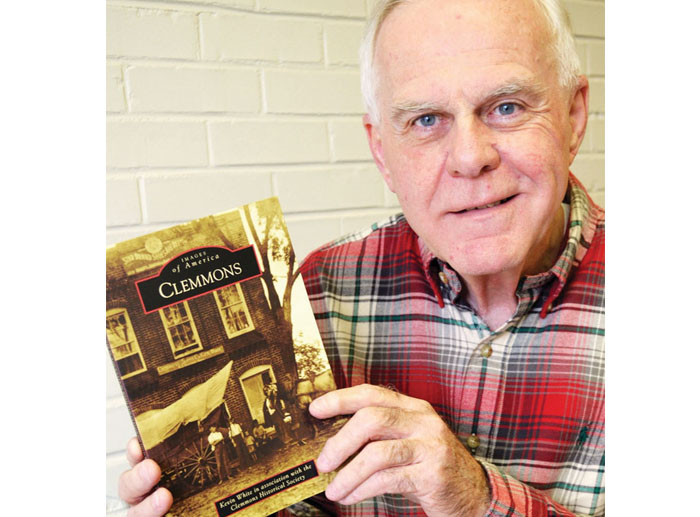 David Hauser was the main contributor from the Clemmons Historical Society as a liaison with author Kevin White to publish the Images of America Series book entitled Clemmons by Arcadia Publishing. Submitted photo

When Novant Health Clemmons Medical Center was considering putting up a “history wall,” company officials were considering a spot taking up only five feet or so near the entrance.

Then David Hauser came along, and everything changed.

Mary Cameron, a longtime Clemmons councilwoman and Novant board member at the time, remembers it well.

“So David came with a trunkful of pictures and documents when we met at Village Hall,” Cameron recalled. “The Novant people literally sat there with their eyes glazed over, and the lady there in charge said, ‘This is going to take up more than five feet,’ and I said, ‘Yes!’ David had all the pictures and information, and was more than happy to give it to them. The result is on that wall, and it’s more than five feet, and it could have gone on forever. He’s responsible for that wall there.”

When it came to family, community, history and making the most of life, Hauser, who passed away at age 76 in September, was always all in.

Dwight Sparks, the longtime publisher and editor of the Courier, and a man who has always had a way with words, had this to say about his friend: “David Hauser was devoted to Clemmons, a champion of worthy causes. He honored the past generations, the pioneers who built the village’s foundations. He was Mr. Pancake Breakfast for the Civic Club. He literally helped write the book on Clemmons. His death is a tremendous loss. Nobody knew more about this village than David.”

And he was always happy to share and play many roles, like at Clemmons United Methodist Church, where he was a dedicated member.

“He would come into the Fellowship Class and chat with those around him … mostly about his family, children and grandchildren, and about the Clemmons Historical Society,” said Barbara Walker. “He loved our class, and when the Hanes property on Middlebrook was sold and the new owners had an open house, they invited the historical society, and in turn, David invited our entire class to go. We did, and it was wonderful seeing that property and having David tell us about it. He was very proud to be a part of that. Our class will always remember David as one of the kindest, most generous persons we’ve ever known.”

Griff and Libby Harlow added this: “David’s concern and interest for others was immense.

Our son and family were members of Clemmons UMC 20 years ago, and 10 years ago when we joined, David would invariably say, ‘How are Jeff and his family doing?’ ”

Then there was the Clemmons Civic Club, where the annual pancake breakfast was always a highlight. But that was only part of it.

Dan Monroe got to know Hauser through many of the activities in which they worked closely together, and he said that the club benefitted in many ways from his leadership and contributions.

“He had an easy-going manner that made him very approachable,” Monroe said. “To say he was a good guy seems an inadequate compliment, but he truly was a good person in thoughts and deeds. The world could use more people like him. All of Clemmons gained from the various community activities that David dedicated himself to.”

Garland Layton, another friend from the Clemmons Civic Club, has served as president of the club in the past, “and sometimes I would just call David and talk to him about things. He had a very calm demeanor and was just a super nice guy. He is going to be missed.”

Hauser grew up in Winston-Salem and graduated from R.J. Reynolds High School. He attended N.C. State was in the engineering school, which followed by being a VISTA volunteer in Iowa before serving in the U.S. Army as he fought in the Vietnam War.

His passion for photography and writing led to a position as associate editor of the Courier in the 1970s when he got married to Vicki, and they started a family that included two children and five grandchildren.

Son Brent said that he appreciates all the time he got to spend with his dad and the many good times they shared together.

“I didn’t realize how much I valued him as a dad until I became one myself,” Brent said. “He was great. He was able to give his kids a lot of time because he was self-employed. Our hobby was model railroading. If you go to our house, there’s a building out back that had his roller business and publishing business. It was a working workshop. His workshop was my playground.”

Brent said that living in Clemmons for a long time and being a part of enjoying and appreciating the community led to his dad’s involvement with the historical society, where he “helped get it off the ground, if you will” — resulting in leadership roles and being a big part of putting together the Clemmons history book.

“He was really, really proud of that,” Brent said.

Lyn Merritt, who served as secretary of the historical society for years, said that “journalism, publications and history seemed to be David Hauser’s love in life outside of his family.

“He seemed to be a magnet for anything having to do with Clemmons history that could be of future interest to the citizens of Clemmons. He accumulated pictures, articles, artifacts and anything of significant historical value. I enjoyed his positive spirit and excitement about finding something of historical value to the organization and community.”

Hauser worked for many years in the historical society, serving as vice president until Janet Banzhof passed away in 2015. He then became president and served in that capacity until several months ago when he became unable to carry on in that role.

Ted Guenther, who then took over as president, met Hauser when he joined the Clemmons Civic Club and they became friends after discussing the history of Forsyth County.

“The love of history is what brought us together,” Guenther said. “It is very unusual to find a person as dedicated to the history of a small village as David was. He truly took pride in the past for Clemmons and was actively engaged in keeping local history alive for future generations in many ways.”

John Bost, who served three two-year terms as mayor of Clemmons from 2007 to 2013, said that Hauser “was a constant in my community life. He was always informative and available when I needed answers about our history or some historical context per a particular parcel or situation. He was one of the kindest of men. He will always be remembered for his heart for the village and the greater Forsyth.”

Mike Rogers, a current Clemmons councilman who is running unopposed in November to be the next mayor of the village, said that Hauser sincerely loved collecting and archiving the historical information and artifacts concerning the local area.

“He spent an inordinate amount of time sorting, copying and boxing many documents that pertained to events that helped shape our community and that documented the growth and evolution of the Village of Clemmons,” Rogers said. “We learn from our past, and David was an excellent teacher. He has left an indelible mark on all of us through his passion and compassion of his love for Clemmons.”

Cameron concluded, “He was just a dear, sweet man. He would do anything at the drop of a hat, like showing up with a trunkful of stuff, and was more than happy to spend time with you telling you stories.”

Yes, that history wall at the hospital “could have gone on forever,” and so will all the precious memories of David Hauser.