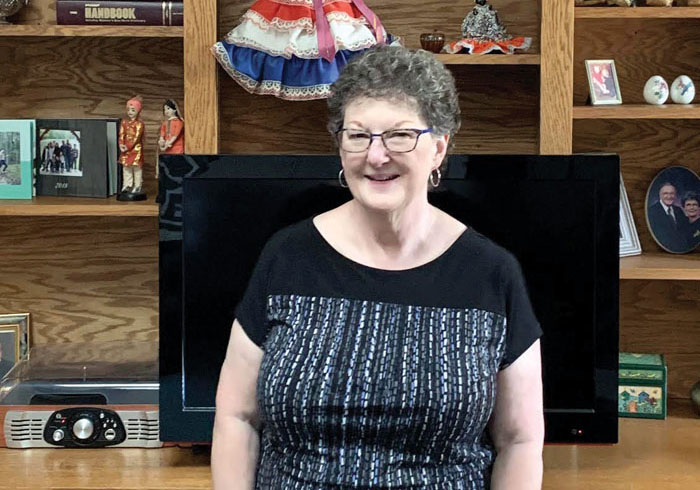 Diane Kirby at home with many of her collectibles from her adventures traveling.

When Diane Kirby is asked where she is from, she laughs and states, “everywhere.” Kirby has made three trips around the world and visited 25 countries. “My dad was a minister and when I was 11 years old, we left South Carolina to begin mission work in Bangladesh. I was the oldest of three children in my family, and we spent most of our childhood overseas,” explains Kirby.

Kirby and her siblings went to a small American school while their family served in their mission work. “I started in sixth grade, and initially the teacher would teach two grade levels at a time, but eventually that changed over to more of a traditional setting with just one teacher teaching the same grade level,” notes Kirby. “Although many may think leaving your friends and home behind would be challenging, especially in middle school, I had a very strong faith that my parents had instilled in me. It was exciting to see another country and having been exposed to missionaries that had come to speak at our church prior to leaving, I thought their lives sounded fantastic.”

Kirby’s family encouraged their children to explore the different countries and cultures while they were on their mission trip for six years. “Just arriving in Bangladesh initially we did so through the Pacific Ocean by freighter with all of our household goods. Whenever we took vacations, they were never back to the United States, it was always in surrounding countries. We made so many memories as a family. Driving by car through India and getting my first look of the Taj Mahal one morning in brilliant sunshine with a cloud cutting across the minarets making it look like a castle was breathtaking. It was even more beautiful than I imagined,” reflects Kirby.

Kirby’s adventures weren’t completely without its risks. During Kirby’s senior year, the women and children had to be evacuated for several weeks as there was unrest with Pakistan and India. “The men had to stay back since we had our possessions and items in the country. We and many other Americans were evacuated to the Philippines until it was safe to go back. We continued our schooling there,” recalls Kirby. When Kirby did return to Bangladesh, she graduated in the second class to do so in her American school. “There were only two in my graduating class at that time,” says Kirby.

When Kirby was considering choices for college, Carson-Newman University in Tennessee was on the forefront of choices. “I had always been a self-taught pianist and thought that I would study music. Also, many of my family members had attended Carson-Newman so it just seemed like the right choice for me too,” explains Kirby. “Once I got to school though, I realized that although I could play and read music, getting a degree in music was a bit more than I had anticipated. I changed gears and focused on getting my degree in business administration after being there for a year and a half.” In college, Kirby worked both inside and outside the classroom. “I worked in the cafeteria for three years, and my senior year I was a dorm assistant,” remembers Kirby.

Kirby also had another life-altering event while in college when she was introduced to her future husband, Larry. “A former dorm mother told me about him and thought we would be a good fit. She also talked to Larry and showed him my picture. When he saw me one day after I had gotten off work, he came over and introduced himself. He had told me that I needed to come and get some things that my brother had left behind from his roommate. Larry then asked me out. I gave him a rough time for about six weeks, but the rest is history. We started dating in 1969 and graduated in 1970. Larry graduated a semester ahead of me, and then we got married,” says Kirby.

Starting their life together, Larry and Diane would move somewhere completely new to both of them. “Larry had found a job at Kraft Foods and knew that he would be relocated somewhere in the Southeast. Initially, he was transferred to Greensboro where we lived for about three years. I began working as a bookkeeper in a Methodist church. Not too long after we moved, we ended up in Clemmons,” says Kirby. “When we moved, we found out I was expecting our daughter, Laura. I stayed home with her, and five years later came our son, Larry Wayne,” says Kirby. “Being an outsider with no family in Clemmons, what both Larry and I learned really quickly while raising our kids was the sense of community that had embraced us. We never felt alone and were overwhelmed by the sense of welcome that we have experienced.”

Kirby’s new home and community provided a place for her to also utilize her musicality. “I enjoyed playing the piano at Clemmons First Baptist and helping off and on with both the adult and children’s choirs there too,” mentions Kirby. “I had previously gained experience playing in front of people for the English-speaking services for my dad overseas. It helped with being nervous to have that experience,” notes Kirby. Her talents were also recognized and needed throughout her children’s younger years. “I helped with their musicals at West Forsyth for several years. I also played over at the Lewisville Square for several years for their little theater performances,” says Kirby.

As Kirby’s children got older, Kirby considered a job that was mentioned to her. “In 1992, my daughter had graduated from high school, and I learned of a file clerk position at Wake Forest School of Medicine. I thought it sounded interesting, so I interviewed for it. I ended up working there for 21½ years and really enjoyed it tremendously,” reflects Kirby.

Kirby’s focus these days are cherishing moments with her 14 grandchildren and 2 great-grandchildren. “Ranging in ages from 24 and 2 years old, our family is close enough where we can see them frequently. The grand and great-grandchildren bring so much joy and blessings to our family. I love being able to help them whenever they need me,” says Kirby. “Larry Wayne and Laura’s families share the love for the arts that was instilled in me. I love sharing that with them.” Whether she is at the piano, knitting, cross stitching, or reading, Kirby gets great fulfillment from her passions. “At this point in life, I feel quite lucky for all the adventures I’ve been able to take, and a family that has enriched those moments,” she says.