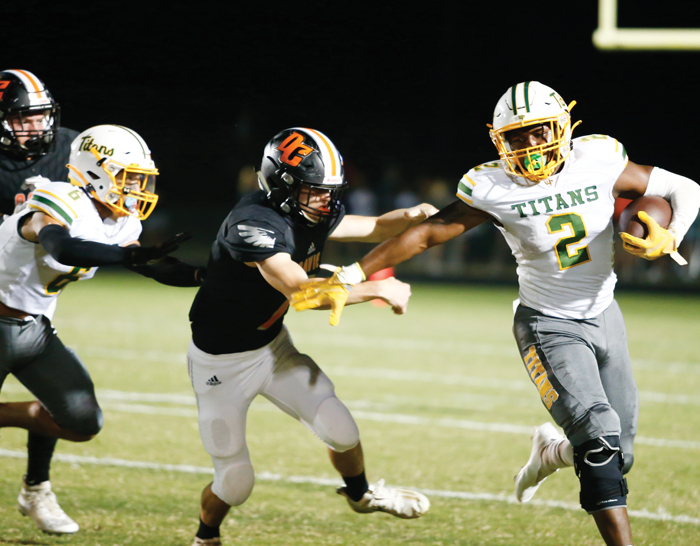 And that something did change. Jevante Long rushed for 236 yards on 26 carries and two touchdowns as West Forsyth throttled Davie County 35-14 in a Central Piedmont 4-A game.

The win was certainly welcomed after the Titans (4-3, 2-2) had lost the previous two games to Glenn and Reagan.

The win was a stark contrast to the outcome of the previous week when Reagan stifled West Forsyth to win 15-9 in Clemmons.

“Our kids had a great week,” Snow said. “So resilient, had the right mindset, got their butts back to work, and they felt good about it. So, I was proud of them.”

One change Snow and the Titans made was controlling the clock when they had the ball because of the potency of dynamic running back Tate Carney of the War Eagles, who is a senior and has committed to play at Wake Forest. When the Titans had the ball, they drained the play clock to almost 0 on almost every play.

“We didn’t want to go real fast,” Snow said. “If you go real fast, that bunch right there is going to be trouble. So, you basically took your time and tried to marinate on it the best we can. We’re good on defense. I don’t want to take nothing away from our defensive guys, but to limit the opportunities is a big deal. 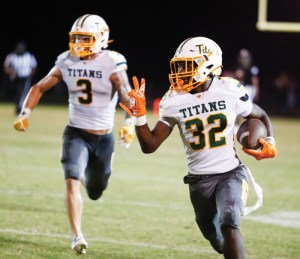 Davie (5-3, 2-3) went three-and-out on its first drive, but on its second drive, Carney and quarterback Alex Summers were able to get a sustained drive. Davie went on a 15-play drive, but Palmer Williams’ 28-yard field-goal attempt was blocked with 2:10 left in the first quarter. However, Williams picked up the loose ball and fired it into the end zone, but it was incomplete.

The game remained scoreless until quarterback Chris Van Kleeck scored on a 5-yard keeper with 8:15 left in the second quarter to help give West Forsyth a 7-0 lead.

“Early, we get three-and-out on the first drive, then we kind of go back and have a little bit of an issue,” Snow said. “And you feel like, ‘Golly.’ And you’re going to give them an opportunity again. But we just kept playing and found a way.”

Before Van Kleeck scored, Snow and offensive coordinator Sean Joyce decided to change some things offensively. They moved quarterback Bert Rice up from JV, gave him some touches, and also let Van Kleeck, while playing most of the game at quarterback, sprinkle in some plays at running back.

“What we ended up doing, we made a move this week, basically last Friday night (Reagan game), we’ve got to do some things to kind of evolve,” Snow said. “Our JV quarterback (Rice) has done a really good job. He’s really smart-headed. He throws it pretty well. He had a couple throws.”

West Forsyth took possession on its own 46-yard line with 2:50 left in the second quarter. Rice threw an 8-yard pass to receiver Bralen Morris, then followed it with a 3-yard to Morris. On the next play, Long scooted to his left and scored on a 43-yard touchdown with 2:01 left in the second quarter. Morris caught a pass from Van Kleeck for the two-point conversion to extend the lead to 15-0.

“They just executed a little bit better than we did,” Coach Tim Devericks of Davie County said.

The Titans took the opening kickoff of the second half at its own 20. After five plays, Long scored on a 26-yard run with 9:29 left in the third quarter, but the Alejandro Morillon’s extra-point kick was blocked to keep the score at 21-0.

“They have two good running backs (Long and Mack David), plus a quarterback (Van Kleeck), when he’s in there, that are tough tackles,” Devericks said. “It really didn’t matter how many guys we tried to add. Just eventually trying to get those guys to the ground is the main thing. They ran the ball hard.”

The War Eagles scored their first touchdown with 7:26 left in the third quarter after Zymere Hudson caught 19-yard pass from Summers to help make it 21-7. 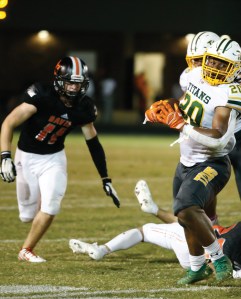 “They’re fighting, too,” Snow said of dominating the first 2 1/2 quarters. “You know, they practice just like the rest of us. But I was proud of our kids.”

Davie took the ball with 1:49 left in the third quarter and went on an 11-play drive, eight of which were runs by Carney for 46 yards. On fourth-and-goal from the 7, Summers’ pass was incomplete to turn it over on downs.

On the ensuing drive, Van Kleeck fumbled and Peyton Helton of Davie County scooped up the loose ball and scampered in for a 9-yard touchdown with 9:18 left in the fourth quarter to help slice the lead to 21-14.

In addition to the score being whittled down, Carney also started picking up his play. He finished with 96 yards on 23 carries.

“That dude’s special,” Snow said of Carney. “I think I might come to (Davie’s) graduation. He rolled. This is a such a game of momentum. When you start feeling it going the other way, you go, ‘Oh, gosh.’ And then he kind of got going, and that was big.

David was just a defensive catalyst for the Titans, he also provided some offensive spark. He scored on a 34-yard run with 6:38 left in the fourth quarter to help extend the lead to 28-14.

On the ensuing possession, Davie started at its own 25 with 6:32 left. It went on an eight-play drive, but on the ninth play, Summers was intercepted by Don Robinson at the West Forsyth 34 and ran it back 66 yards for a touchdown with 3:28 left to help extend the lead to 35-14.

“It was a CPC game at that point,” Devericks said. “Anyone could win. They just made a play when they needed to.”

The interception by Robinson ended any chance of Davie coming back.

“I think that ends up helping us because it’s just a momentum (thing), it’s just really a momentum thing,” Snow said.

Not to be outdone in the David family, Mack’s brother, Caleb, intercepted Summers with 2:23 left. Summers finished 18-of-32 passing for 117 yards, a touchdown and two interceptions.

“Let me tell you something, that one (Caleb David) is going to be special,” Snow said.

“I think it’s just a momentum thing,” Snow said. “We felt good about what we need, and now we move on to the next one,” Snow said. “Hopefully we get some guys healed up. But right now, we’ve got them banged up. You ain’t playing football if you ain’t banged up at this time of year.”