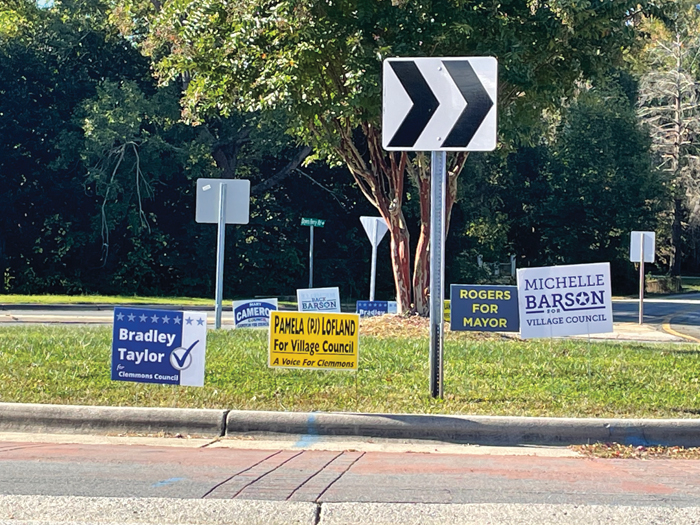 Photo by Jim Buice Political signs for Clemmons candidates in the Nov. 2 municipal election are planted in the middle of this roundabout at Peace Haven Road and Harper Road.

Positions up for grabs in local municipalities

It’s the municipal election season, and that means there are all kinds of moving parts, including signs going up for candidates who aren’t even seeking re-election.

Such was the case in Clemmons last week when signs were planted for John Wait for mayor and Matt Moger for council. Their names aren’t even on the 2021 ballot.

Wait, who served a pair of two-year terms as mayor, announced in July that he wasn’t going to seek re-election, and Moger, who ran for a council spot in 2019, finished fifth out of six candidates.

So Clemmons officials reached out to each individual and found out there was no change of heart, and the signs were removed. Of course, those or others could appear again. There was also a report of someone taking down signs, which is a misdemeanor, last week.

The official slate for the Nov. 2 election in Clemmons includes Mike Rogers, who was elected to a four-year term as a member of the council in 2019, as the lone candidate to file for mayor. With three spots available for the council, four candidates filed to run, including current council members Michelle Barson and Mary Cameron, along with former council member Pamela “P.J.” Lofland and political newcomer Bradley Taylor.

Chris Wrights, the top vote-getter in 2019, is in the middle of a four-year term and will return to the council while Scott Binkley, who is completing a four-year term, did not file for re-election. Barring any write-in candidate beating out Rogers for mayor, his replacement on council to complete the final two years of his term would be appointed after the newly elected council members are sworn in. 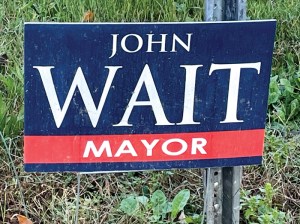 Photo by Jim Buice
This John Wait sign still stands at the intersection of Harper Road and Styers Ferry Road even though the current mayor of Clemmons isn’t on the 2021 ballot.

Barson was the top vote-getter in 2017 and is completing a four-year term. Cameron, who served six four-year terms and 24 consecutive years on the board before losing in 2017, is wrapping up a two-year term after edging Lofland, who served from 2017 to 2019, for the final spot two years ago.

Meanwhile in Lewisville, Mike Horn is seeking a fourth consecutive two-year term as mayor in Lewisville and again running unopposed.

This will actually be Horn’s fifth consecutive term as he was elected to the council in 2013 before becoming mayor two years later. (He also served as mayor from 2003 to 2005.)

Lewisville had long-established term limits on not seeking re-election for the next two-year term following four consecutive terms before learning in 2018 that term limits were unconstitutional in N.C. — although many former mayors and council members stated they didn’t want to see any changes to the town charter and term limits, wanting to maintain the long-established traditions of the town.

“That was a consideration, but I talked with previous mayors and a members of previous councils and this current council, and all encouraged me to run one more term,” Horn said in July after filing for re-election. “I had every intention of not running again, but with all of the funding opportunities for projects that are and will become available to the town, I felt it was important for us to maintain the important contacts I made with the county and the state.

“Additionally, as chairman of our region’s transportation advisory committee, I believe I am in a position to make sure that Lewisville has the opportunity to take advantage of road, sidewalk, pedestrian and bike project funding. Not to say that I’m indispensable, but I just felt that the contacts that I’ve made over the last 20 years will be very helpful in this once in a lifetime opportunity. Realistically, Lewisville has term limits every two years when our residents have the opportunity to retain or replace all six council members and the mayor.”

In Bermuda Run, the mayor’s race isn’t in play this year as Rick Cross was elected to a four-year term in 2019.

However, five candidates have filed in the race for three council seats, including incumbents Mike Ernst and Ken Peacock, and former council member Ed Coley, who previously served 12 years on the town board but did not run in 2017. Newcomers Mike Brannon and Melinda Szeliga have not previously held political office in Bermuda Run.

Ernst was first elected as a councilman in 2017 and is seeking a second term. Peacock was appointed to the council in January 2020 to fill the unexpired council term of Cross after he was elected mayor and sworn in in December 2019.

The three top vote-getters will be elected to serve four-year terms on the council and join Curtis Capps and Heather Coleman, who won four-year terms in 2019. The other current council member, Chris Fowler, did not file for re-election.