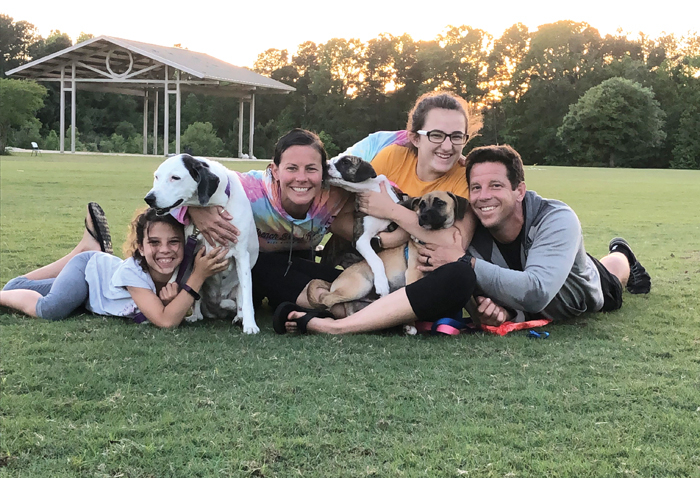 Chip Eakes with his wife, Cara, and daughters, Summer (10) on the left and other daughter, Kyrsten (17) accompanied by their fur babies: Bonita, Nutmeg and Turbo.

Chip Eakes was raised in Clemmons as the youngest child of three. “My earliest childhood memories always include playing something that involved a ball. I played basketball, baseball, swam and loved soccer,” mentions Eakes. “I ultimately stuck with playing soccer when I was at West Forsyth High School in the midfield position.”

Eakes went to Forsyth Technical Community College right after he graduated from high school. “I got my associate’s degree and contemplated going to the University of North Carolina at Chapel Hill upon completion. However, a job opportunity presented itself that allowed me to travel and get some government contracting experience. My first job was in Hawaii, and I would go to various military bases where we would refurbish satellite dishes. It was similar to the movie, ‘Contact’ or so it seemed,” laughs Eakes. “I stayed in that line of work for about five years. In between assignments, I would go back home and visit my family. One of those times I met my future wife, Cara, who was from the Winston-Salem area.”

Like many young families, Cara and Chip realized that having children made them want to establish roots. “I knew that my contracting work wouldn’t allow that to happen,” reflects Eakes. “When my oldest daughter, Kyrsten (17) was able to go to school we moved to Charleston, South Carolina. Our youngest, Summer, came seven years later.”

While the Eakes’ family established their roots in Charleston, Chip was initially a manager for a car wash company and did some independent contracting work. “Coincidentally, I started coaching my oldest daughter’s soccer team. They needed a coach, and I stepped up. I loved it immediately and found a real passion from working with the kids. What started off as a volunteer role became a full-time position at the South Carolina Surf Club,” explains Eakes. He coached players from the ages of 8-18 years old. “Working with kids really ignited a passion. Reinforcing values both on and off the soccer field helps to provide another way to teach kids about life lessons. Most of the players got those lessons at home, but some didn’t. I wanted to make a difference,” says Eakes.

Eakes’ talents were utilized off the field as he did focus also on being a personal trainer and emphasizing the importance of nutrition. “Once I got really involved with the soccer program, I wasn’t able to do this quite as much, but I enjoyed educating people on how to take care of themselves, and achieve their goals,” says Eakes.

Although Charleston had been the place the Eakes family had begun raising their children, they recently decided to come home. “Family being in Clemmons was a factor in our decision to move back. Also, a friend of mine is trying to start a 40-acre farm in Tobaccoville. I’m helping get that started with him. We would love to make it an agritourism farm with corn mazes, pumpkin patches, and very fun to visit. But we will also want to grow produce. We will utilize the hydroponic method. Produce like strawberries won’t be grown in the ground. Instead, it will be done in a greenhouse. The hydroponic method reduces the risk of pests because you’re essentially creating the environment for it to grow. The only con is that upfront costs are more expensive, but on the backend it’s a lot better,” says Eakes.

With Eakes’ new business venture in full bloom, he still has managed to find time to stay true to his roots with coaching soccer. “I’m involved with the N.C. Fusion as a coach for their pre-ECNL West program,” explains Eakes. “Serving as their director, I’m responsible for coaching three teams in that division. In the time that I’ve been back, it’s been a tremendous experience, and I’ve really been grateful to work for the organization. Continuing to help players develop their potential, enjoy the sport, and appreciate the value of working together as a team is rewarding to me.”