West cruises past Reynolds, looks ahead to East Forsyth 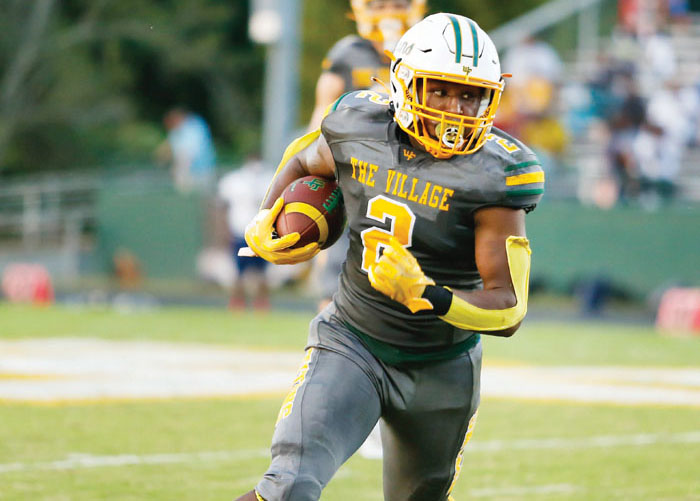 West Forsyth accomplished all of its goals last Friday night while playing struggling Reynolds in a Central Piedmont 4-A at Deaton-Thompson Stadium.

The Titans routed the Demons 46-7, played all of their players, had a running clock throughout the fourth quarter, and stayed relatively healthy for this Friday’s regular-season finale showdown at Jerry Peoples Stadium with cross-county rival East Forsyth.

“I think the best thing tonight is that we did a great job of, I’m proud of our kids, but we played everybody,” Coach Adrian Snow of West Forsyth said. “As a coach that’s what we love. I want to play all these guys. And I love ’em. And sometimes we’ve got to do what we’ve got to do. It’s tough to do, but this is one of those situations I was proud we got to play them.”

It didn’t take long for the Titans to take control of the game. The Demons went three-and-out on their opening possession, and the Titans took over at their own 44 with 9:55 left in the first quarter. Seven plays later, Long powered in for a 15-yard touchdown run with 7:27 left in the first quarter to take a 6-0 lead. The two-point conversion failed.

“The first half, I came out here ready to play,” Long said. “I ain’t going to lie, I’ve been ready to play all week. So, it was good for me to get out there and get started early. I’m glad my teammates got to get in the game and score a little bit, too.

“So, on both sides of the ball we did good. I’m proud of my O-line because they put me in the end zone tonight, and the receivers.”

Long was right. On the ensuing possession, Reynolds went on an 11-play drive, but Coach Pat Crowley of Reynolds called for a fake punt on fourth-and-12 from the West Forsyth 36. Isaiah Lytton was the upback, and he took the direct snap. However, Lytton was stopped after a 4-yard run, which gave the ball back to West Forsyth.

The Titans took over and scored nine plays later after quarterback Bert Rice, who has played the last two games against Davie County and Reynolds, fired a 25-yard touchdown pass to Bralen Morris with 4:46 left in the second quarter to extend the lead to 19-0 after Alejandro Morillon made the extra-point kick.

The way the offense is clicking now after defeating Davie County 35-14 two weeks ago, and then defeating Reynolds last week, is in stark contrast to the previous two games when it lost to Glenn and Reagan.

“It’s a tough league, man. You’ve just got to get lined up every Friday night in this league,” Snow said. “And they’ve (Reynolds) got some guys that can play. It’s just one of them things where I’m just proud of our kids.”

The Titans weren’t done scoring in the first half. Long scored on an 8-yard run with 1:49 left to help push the lead to 26-0.

“I don’t know what it was about today. I just felt like I was running smooth tonight,” Long said. “Even on that little pass I caught down the field, I just felt like, “You know, I feel like I’m floating today.’ I got hit a couple times. I’m good.”

After the game, Long didn’t even realize he only played the first half.

“That’s crazy,” Long said in finding out that he had 175 yards rushing. “I can’t say I’m surprised because I’m just a player, so I figured that was going to have a good night.”

The Demons’ lone two wins were against High Point Central (26-2) in the season opener, and Parkland (49-0) on Oct. 1 in its third conference game. The Demons have been outscored 336-170, including 266-68 in their first six conference games.

Also, Crowley is in his seventh season as the head coach of the Demons, and he’s 22-51 overall and 5-33 in the Central Piedmont 4-A.

West Forsyth finished with 275 yards rushing on 39 carries, and Rice and Chris Van Kleeck combined to go 8-of-10 passing for 54 yards, with one touchdown and one interception. Reynolds finished 7-of-15 passing with one interception and 99 yards, and had 115 total yards.

“One of the cool things we’ve done is we’ve made some changes to help us out,” Snow said. “We’ve moved the quarterback (Rice) and he’s done a job throwing the ball. He had an interception tonight, but that’s part of it. But that’s what we’re trying to work on because we wanted to do it because he ain’t been in the fire.”

Reynolds ended the shutout after A’Mario McClure scored on a 5-yard run with 1:05 left to help make it 46-7.

“We’ve kind of got going here,” Snow said. “Hopefully, we’ll line up next week for something fun.”

“I think the cool thing is, we can do a lot of different things with Chris at quarterback or (Rice) at quarterback,” Snow said. “It’s just the way it works. It’s a good thing. It’s broadened us a little bit.”

Friday’s game against East Forsyth is also the first time the two teams have played each other since Oct. 11, 2019, at Fred E. Lewis Stadium when West Forsyth defeated East Forsyth 41-38.

There was no fall schedule last year, and the two teams didn’t play in the spring because West Forsyth missed two games — East Forsyth and Glenn — because of COVID-19 protocols. Snow had it in his phone as to how long it will have been since the two teams played.

There are many rivalries in the county, but the rivalry between West Forsyth and East Forsyth almost always has meaning during the football season.

“It brings the best out of you,” Snow said. “You’ve got to play well. If you don’t play well, you’re going to get beat.”

“They’re going to bring something different to the table,” Long said. “You know what I’m saying, but I think if we play well enough it’s going to be a good game, 7:30 next Friday, Jerry Peoples Stadium, on television. So, I think it’s going to be one for the books.”

Long added that his being a senior was irrelevant to the rivalry.

“It’s always a big deal when you play the East Forsyth Eagles,” he said. “It’s going to be a big one.”

This is one of the best rivalries in North Carolina, and it’s also a rivalry between coaches Todd Willert of East Forsyth and Snow, who became the coach at West Forsyth in 2008. Since then, Willert has an 8-6 advantage against Snow.

“Fourteen years, it’s been cool,” Snow said. “And it’s been tit for tat, and back and forth. That’s what’s fun about it.”

Snow also feels like the rivalry has elevated the level of both teams..

It’s also helped the play of the entire conference.

“Everybody wants to catch us, which is a good thing,” Snow said. “That’s what happens. So, you just try to do the best you can and move on.”

Not only is the game a big deal. It’s one last chance to play before a probably berth in the NCHSAA playoffs.