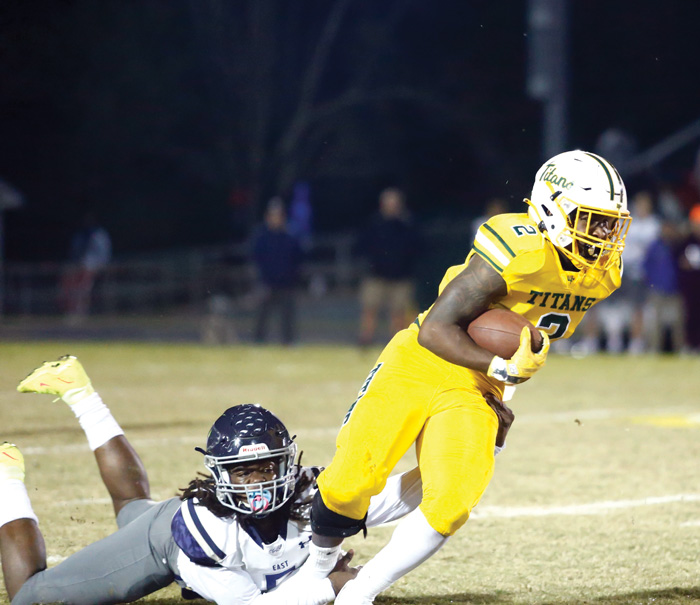 Before last Friday’s game at Jerry Peoples Stadium, it had been 749 days since East Forsyth and West Forsyth played each other in football.

After the long wait, East Forsyth controlled much of the game and raced past West Forsyth 35-14 in the final in a Central Piedmont 4-A game, which finished the regular season.

East Forsyth (8-1, 5-1), although it had just one loss, along with Glenn and Reagan in the conference, finished in third place because it played one less game because it didn’t play Mount Tabor because of COVID-19 protocols at Mount Tabor. West Forsyth (5-4, 3-3), which had to miss two games during the spring season against East Forsyth and Glenn because of COVID-19 protocols, finished in fourth place.

Despite the loss, Coach Adrian Snow of West Forsyth realized the importance of the rivalry between cross-county rivals.

“It’s good. I think it brings the best out in kids,” he said. “We played really, really hard. Nobody wants to give up the ghost against those guys, but they did a good job, and they played a little cleaner than us for a while. And they’re a good team.”

“It’s good to play,” Coach Todd Willert of East Forsyth said. “It’s great because it’s a great rivalry. Now, it’s a friendly rivalry. The kids like each other. There’s no bad play out here, punching and shoving. And so, it’s good. It’s good for the conference. It’s great for the county.”

The Eagles scored their first touchdown after Que’sean Brown caught a 15-yard touchdown pass from quarterback Jaylen Raynor with 1:53 left in the first quarter to help take a 7-0 lead.

After the Titans went three-and-out on the ensuing possession, the Eagles extended the lead after Traylon Ingram scored on a 1-yard run with 10:54 left in second quarter to help push the lead to 14-0.

“We can’t get behind the chains,” Snow said. “We had a good drive, and then we had like three penalties back-to-back-to-back. I tell our guys — I love them and they play hard — we’ve just to be a little smarter there. That’s just what we’ve got to do there.”

The Titans inched back into the game early in the third quarter after Marcus Wilson intercepted Raynor’s pass and scampered 36 yards for touchdown to help the Titans creep back with 10:34 left to help make it 14-7.

After the Eagles went three-and-out on their next possession, the Titans had fourth-and-1 on the Titans’ 38. Running back Mack David of the Titans was stopped short of the first down to turn the ball over on downs.

“You go down there, and it’s going to make it interesting,” Snow said. “You know, it’s just one of those things.”

East Forsyth took over at its own 38 with 6:20 left in the third quarter. Two plays later, Ingram caught a 59-yard touchdown pass from Raynor with 5:39 left to help extend the lead to 21-7.

“That was a huge run,” Willert said of stopping David. “I think it was fourth-and-less than a yard, and to stop them was a huge play. Our defense stepped up and then our offense got back up there and did what they were supposed to do.”

The momentum kept going the way of the Eagles. Sophomore Bert Rice, who was making his first start at quarterback because Chris Van Kleeck couldn’t play offense because of an injured hand, was intercepted by Nasir Graham at the Eagles’ 48 with 5 minutes remaining in the third quarter.

Rice finished 17-of-28 passing with one interception and 136 yards.

“I was so proud of him,” Snow said. “I told him (Friday), I said, I told the principal (Kevin Spainhour), ‘We’re going to put a young ‘un in there.’ He’s a baby. He’s savvy. He knows where to throw it. He doesn’t mind stepping up in there. He’ll take a hit. And he’s a good one. And he’s going to do nothing but get better as he gets stronger.

East Forsyth took advantage of the turnover and scored four plays later after Quan Porter scored on a 5-yard run with 3:09 left to help extend the lead to 28-7.

“We can’t beat ourselves,” Willert said. “That interception. You’re playing a good team like that, you can’t do things. And then you lose field position because they have such a great kicker. And that’s what I was worried about. We lost that for a little bit in the third quarter, but the offense came back and picked themselves up after the defense picked them up.”

The Eagles were in clear control of the game with about 15 minutes left in the game.

“We’re going to keep fighting the fight,” Snow said. “I’m not one of those people. I ain’t never felt helpless much in my life because of who’s my God. But I don’t ever feel much helpless. We’re going to keep playing hard, and our kids did. They played hard until the end.”

Despite trailing by 21 points, West Forsyth stayed in the game with a long drive after Porter’s touchdown. It took possession with 3:09 left in third quarter and went on a 15-play drive, ending with senior Jevante Long scoring on a 1-yard touchdown run with 9:24 left in the fourth quarter to help trim the lead to 28-14.

Long finished with 86 yards rushing on 25 carries and a touchdown.

“But, yeah, it’s kind of hard running with nine people coming down the box. It is what it is. I mean, I’m the game player.”

East Forsyth finished with 273 total yards and West Forsyth had 244.

“East Forsyth’s a good team,” Long said. “We didn’t expect them to come out here and play like that. We thought that we had a good rivalry two years ago (when West Forsyth defeated East Forsyth 41-38 in Kernersville), but I think today really showed that time doesn’t mean anything.”

“We talked about that at halftime with Andrew and Tim Davis, and I said ‘Andrew, if you think you get it, let’s do it. He had some big punts and kickoffs — what a great night for Andrew Conrad,” Willert said.

Four plays after converting the first down on the fake punt, the Eagles scored on a 5-yard run by Li’jaye Fisher with 3;45 left to help push the lead to 35-14.

“It’s all about execution,” Snow said.

“You just get better because you’re playing good people,” Snow said of the preparation the Central Piedmont 4-A will give each of the five teams that made the playoffs. “That’s the way it is. That’s the way you do.”

“It’s part of it. Our kids did well,” Snow said. “They’ve had some adversity, but I’ve been proud of them.”

Long knows what’s ahead for the Titans as they prepare to go to Charlotte to play the Sabres.

“We’ll be ready,” he said. “I’m ready. I’m going to get the team ready. We need the leaders to stand up and realize that, this (the East Forsyth game) was my last home game. I’m trying to hold back these tears. My last home game, looking at this field now. Many memories on this field.

“So, I might not get to play on this again, so I feel like the stakes are higher now because now it’s 0-0. So, at any moment anybody can fold, anybody can be going home, anybody can win. So, it just comes down to who plays the hardest. Ain’t no Little League.”