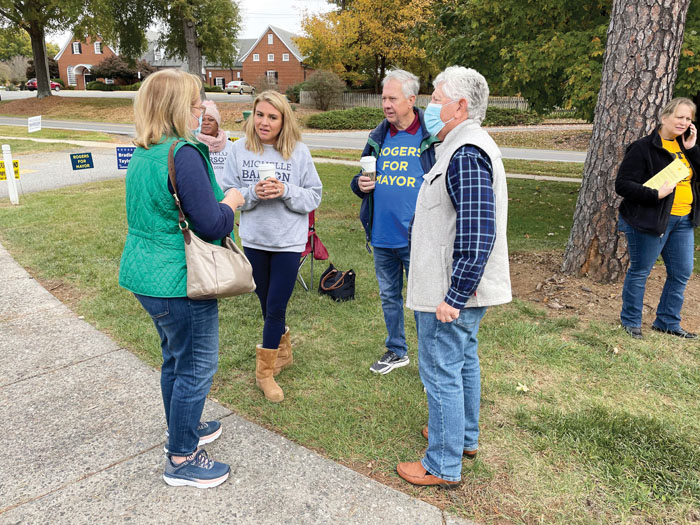 Michelle Barson, the top vote-getter for the Village Council, and Mike Rogers, who was elected mayor of Clemmons in Tuesday’s municipal election, talk with a couple of voters while campaigning outside the Clemmons Civic Club. Photo by Jim Buice, for the Clemmons Courier.

For Clemmons Council (Vote For 3)

For Lewisville Council (Vote For 6)

For Bermuda Run Council (Vote For 3)

When Mike Rogers claimed a seat on the Clemmons Village Council as a write-in candidate in 2011, he never dreamed that 10 years later he would be become mayor.

But that’s what happened in Tuesday’s 2021 municipal election as Rogers, who was running unopposed, was elected mayor of the village. Rogers will replace John Wait, who served a pair of two-year terms but chose not to seek re-election.

“I am so honored and thrilled to be elected as your new mayor of Clemmons,” Rogers said. “In 2011, I was thankful to be elected to the council for the first time as a write-in candidate, and I have been fortunate to work with many councils and excellent staff to address some major concerns in the Village of Clemmons.

“Even though the list can be long and daunting at times with work that remains to be done, I am incredibly optimistic at what can be accomplished with this incoming council and the current village staff.  Thank you for placing your trust in me as the next mayor of Clemmons. I will continue to work hard to ensure residents have an excellent place to live, work and play in Clemmons.”

Incumbents Michelle Barson, who was the top vote-getter with 1,144 votes in the tight race, and Mary Cameron (1,065 votes) were both re-elected to four-year terms on the council and were joined by newcomer Bradley Taylor (1,010 votes), who claimed a two-year term and the third and final available spot on the board.

Barson was the top vote-getter in 2017 and is currently completing a four-year term.

“Many people helped to get me re-elected, and I feel honored to have so many willing to give their time, energy and resources to support me,” Barson said. “I will continue to work hard and to the best of my ability on the behalf of Clemmons.

Cameron, who served six four-year terms and 24 consecutive years on the board before losing in 2017, is wrapping up a two-year term after edging Lofland in 2019 for the final spot two years ago.

“I am happy and grateful to the citizens of Clemmons who, by their vote, are allowing me to continue serving the village that I love,” Cameron said. “Clemmons has made great strides since incorporation, and I see no reason why that couldn’t continue. We will have to adapt to a changing world and citizens’ needs, but we will do that and more.

“Voters made wise choices by electing Mike, Michelle and Bradley. I know we will work together well. I look forward to new challenges. A big thank you to everyone who voted.”

Taylor said he was looking forward to serving in this new role in his hometown.

“I would like to thank my family, supporters and the citizens of Clemmons for electing me to our village council,” Taylor said. “I look forward to serving our community by listening to my fellow citizens, working alongside members of the village council and helping to ensure our community continues to be a wonderful place to live, work and play.”

Rogers, who was part of the council from 2011 to 2017, was elected to a four-year term on the board in 2019. His replacement on council to complete the final two years of his term will be appointed after the newly elected council members are sworn in.

Chris Wrights, the top vote-getter in 2019, is in the middle of a four-year term and will return to the council while Scott Binkley, who is completing a four-year term, did not file for re-election.

“While all of our races were uncontested, it was great to meet so many voters at the polls and receive so many positive comments about the direction of Lewisville,” Horn said after the votes were tallied. “We have a full plate of opportunities ahead of us, including the opening of the new Mary Alice Warren Community Center, but I am confident this council is up to the challenge.”

Foster — as was the case with the election two years ago — was the top vote-getter in 2021 in Lewisville, followed closely by Hunt (who was only four votes behind her), and then Sadler, Welch, Franklin and Smitherman. Only 37 votes separated first and last among the six candidates.

And in Bermuda Run, with five candidates vying for three seats on the council, political newcomers Mike Brannon, who was the top vote-getter, and Melinda Szeliga grabbed two of the four-year terms — joining incumbent Mike Ernst, who was first elected as a councilman in 2017 and will be serving in a second term.

Ken Peacock, who was appointed to the council in January 2020 to fill the unexpired council term of Rick Cross after he was elected mayor in 2019, finished fourth — just eight votes shy of Szeliga.

Coley, who previously served 12 years on the town board but did not run in 2017, finished last.

The mayor’s race was not in play this year as Cross was elected to a four-year term in 2019.