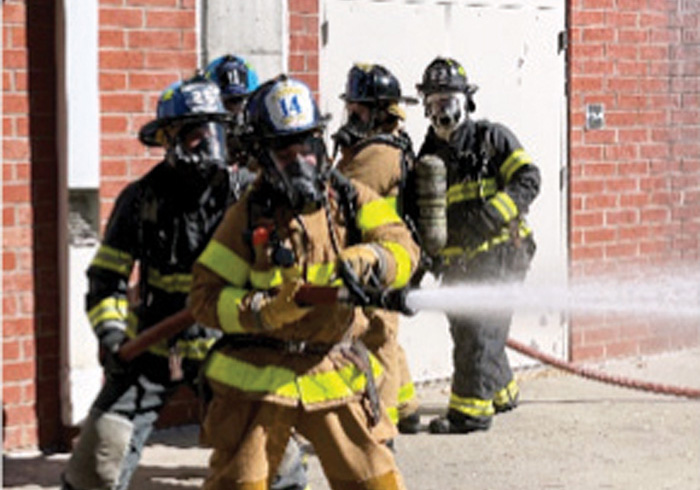 KING — Across the country, the fire service has been witnessing a major reduction in volunteerism over the last few decades. Many departments have seen such a deterioration of personnel that they have hired firefighters on limited budgets to respond to their calls for service. Because of this decline, recruiting has become a major part of the volunteer fire service. One area of recruitment is the youth firefighter program that many fire departments offer for their young community members.

This past Saturday, youth firefighters (commonly referred to as “fire cadets,” “junior firefighters” or “fire explorers”) from multiple departments between Forsyth and Davidson counties participated in youth-oriented training at the Forsyth Technical Community College’s Emergency Service Training Center (ESTC). These future firefighters and community leaders had the opportunity to perform various difficult firefighter scenarios in a controlled environment. For example, smoke machines were used to simulate a smoky environment that they may encounter during an actual fire. The participants rotated between four different stations that included auto extrication, hose line deployment, building search, and “Rapid Intervention Team (RIT)” trainings. (RIT is the term used for a team of firefighters whose primary purpose is to locate and save another firefighter that is lost or calling for immediate help.)

Junior Fire Lieutenant Nick Robinson (Lewisville) said that he thoroughly enjoyed the training on Saturday. According to Robinson, the best part about the day was being able to train with all of the junior members from other departments and getting to meet new people.

The youth volunteer firefighter programs provide teenagers, starting at age 14, the chance to learn about local fire, rescue, and emergency medical services in a safe, controlled, educational and fun way while providing departments with an excellent recruitment mechanism. Teens learn real life skills, an opportunity to build their leadership skills, and gain an understanding of the importance of community. “Being a part of the cadet program has been one of the most rewarding experiences because it has helped me get out of my comfort zone which allowed me to grow as a leader in the program, ultimately to the program’s chief officer,” says Clemmons Cadet Fire Chief Kaylee Gianforte.

The purpose of the youth fire programs is not solely to teach them about the fire service. They are designed to prepare them to be tomorrow’s community leaders and to also build their self-confidence while accomplishing difficult tasks. Lieutenant Will McBride is the adviser of the youth programs at both Lewisville and Clemmons fire departments. “Being able to see the growth and maturing of each member from the first day they arrive to becoming program leaders and then graduating to firefighter is amazing to watch.” McBride started his fire service experience, following in his father’s footsteps at the age of 14 with the Lewisville Fire Cadet Program. His son, Alex (14) is also continuing the family tradition as a cadet firefighter in Clemmons.

“As a nation, we have witnessed the struggle to fill open employment positions in almost all industries and the fire service is no different,” said Captain Rick Washabaugh. “Local departments in the Triad contain a mix of both full-time and volunteer staff. Since COVID, recruitment opportunities have dwindled, and departments have experienced a decline in retaining volunteers and enrolling new ones. With awareness from this special event and honoring our current volunteers, the area fire departments are hoping to expand their youth fire service programs and obtain interest with young men and women to become future volunteers and/or firefighters.” Washabaugh is also an adviser for the junior firefighters at Lewisville Fire Department.

Lewisville Junior Fire Captain Tiegan Spainhour said that he “strongly recommends the youth programs to eligible youth in the community.” Spainhour enjoys the camaraderie with other youth and senior members as well as having fun when working with the fire department staff and responding to calls for service.

To find out more information about youth fire programs, reach out to the local fire department in your community.