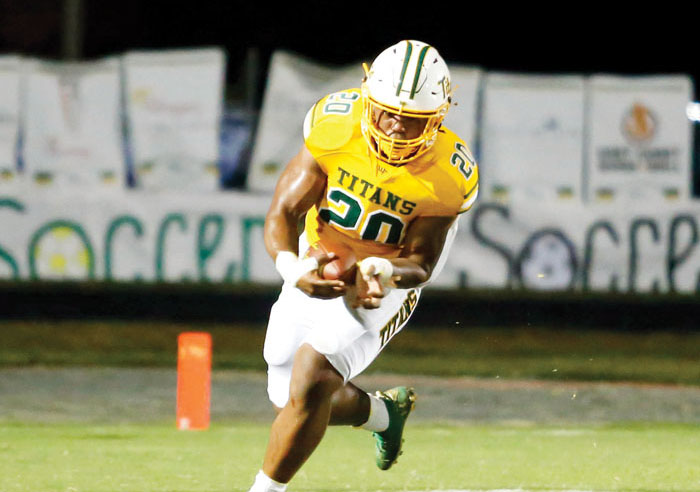 West Forsyth running back/linebacker Mack David runs the ball during a game against Glenn earlier this season. Photo by Brad Richard. To view and order photos, go to https://www.ncprepphotos.com/

The football season for West Forsyth came down to one last scoring drive in the first round of the NCHSAA Class 4-A playoffs.

Quarterback Cam Reese scored what proved to be the winning touchdown with 31 seconds left for No. 16 South Mecklenburg last Friday night in Charlotte as it tripped No. 17 West Forsyth 27-21, ending the Titans’ season.

The Titans (5-5) took a 21-20 lead after running back Mack David scored on a 23-yard run with 2:21 left and Alejandro Morillon tacked on the extra point. However, the Sabres (9-2) took possession at their own 25. The Sabres marched 75 yards and scored on Reese’s run.

“They ended up putting together some good plays and did some good things,” Coach Adrian Snow of West Forsyth said. “We had a few mistakes, not going in the right spots. I mean, that happens in a game. They made the plays there at the end and found a way to win.”

Because of time limitations, Snow said he thought initially that South Mecklenburg would try to setting up the winning field-goal attempt.

Running back Jacob Newman of the Sabres had successive runs of 13 and 11 yards, and the Sabres also had a 22-yard pass from Reese. There was also a pass-interference call that gave the Sabres the ball at the Titans’ 17.

“We at one time thought because of the time, but they broke off a pretty big run. I think there was a facemask in there that got them even closer,” Snow said. “That became a deal, but it’s one of those games. I was super-proud of our kids.

The Titans had one last possession before time expired.

“I don’t know if I’ve ever been proud of a group for fighting like I have that one,” Snow said. “They fought their tails off. We played good defense all year. And we played pretty good defense throughout the game.”

South Mecklenburg, which will play at top-seeded Cornelius Hough (11-0) in the second round on Friday, quickly took charge of the game and scored on its opening drive after Michael Nebit caught a 48-yard touchdown pass from Reese to help take a 7-0 lead.

West Forsyth bounced back after cornerback Don Robinson intercepted Reese and raced 76 yards for a touchdown to help tie the game at 7-7. However, Jaden Alexander of South Mecklenburg picked up a loose ball after a blocked punt and scampered in for a 19-yard touchdown to help take a 14-7 lead.

“They had a big play on a pass. Our special teams didn’t help us a lot. We had two blocked punts. We had a muffed punt. Just little things like that that we normally don’t do. And that just didn’t help us.”

West Forsyth tied the game at 14-14 later in the second quarter after David scored on a 53-yard run, and Morillon tacked on the extra point.

“(David) did well, Tay (Long) did well. They might have keyed on (Long), but I dare to mention he had over 100 and some yards rushing,” Snow said. “He played really well. Mack’s kind of our curveball and gives (us) another opportunity. It’s just another back to carry, and he did a good job.”

Even though David scored to help tie the game, place-kicker Zane Davis kicked a 27-yard field goal to help South Mecklenburg take a 17-14 lead at halftime.

“Ultimately, I’m glad our kids fought. Not that I didn’t think they would,” Snow said. “We had to lay it on the line, and basically that’s what it is this time of year. And they did.”

Losing a close game in the first round of the NCHSAA playoffs is bitter pill to swallow for the Titans.

“We’re not in for moral losses,” Snow said. “There are no moral victories at West Forsyth. Some people might be, but we’re not. At the end of the day, hopefully the next group will want to carry on the pride and tradition of our football program, and keep rolling. See what happens.”

After the loss, the Titans hopped on a bus and headed back to Clemmons, knowing their season was over.

“Our kids did well. Look, a lot of disappointment,” Snow said. “But I think they felt good about their effort. It felt like that would basically carry them a long way in life. They had the right mindset. They did well.”

West Forsyth finished fourth place in the Central Piedmont 4-A, one of the toughest conferences in North Carolina, just behind conference-champion Glenn, as well as Reagan and East Forsyth, which accounted for all three conference losses.

“I thought we did a good job,” Snow said. “At our place, the problem is, when you win six games that ain’t good enough for our people because want to do well. And I take that as a positive.

“We’ve been successful and they want to continue to be successful. And being successful at our place is winning a whole lot more than you lose. So, it’s good.”

Other than Reynolds and Parkland, which struggled within the Central Piedmont 4-A this season, the other six teams, including West Forsyth, Davie County and Mount Tabor, should again be in the mix next season for a conference crown.

“Every year is a new year,” Snow said. “You just don’t really know. And just hopefully we’ll be in the top part and have a chance to win it.”

It’s also been a challenging season for Snow. He missed the first two games of the season against Asheville Reynolds and Oak Grove because he was in the hospital with COVID-19. After offensive coordinator Sean Joyce and defensive coordinator Jonathan McIntosh coached served as interim coaches while Snow was out, Snow came back to coach in third game at Weddington.

“Our guys did a great job all year,” he said. “I’ve been proud of them — coaches and players. Not that they wanted a well-deserved rest, but they’ll get some.”

Snow said that there are 20 seniors from this team. However, the foundation is there for next season.

“We think we’ve got a good group,” Snow said. “We’ve just got to get back to lifting weights and getting better.”

After 14 seasons as head coach, Snow sees a bright future.

“I just look at the seniors that we’ve got,” he said. “I don’t like to mention names because I feel I might leave somebody out. We had a great group that did a really good job. And I think they found it better than they found it, which is good. And we’ll continue to build on it and see what happens.”

One of the things on the horizon for Snow, his coaching staff and players, is recruiting process with college coaches. Players can sign their National Letter of Intent as early as Dec. 15 and runs through Jan. 15. The regular signing period starts on Feb. 2.