Local scholarship founded in honor of soldier who died in WWII 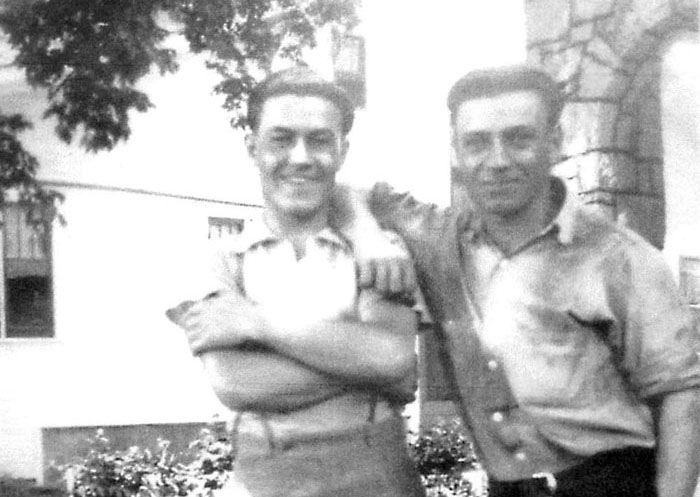 By Ken Burkel
For the Clemmons Courier

It has been more than 75 years since the end of World War II. More than 16 million Americans served in the Armed forces in WWII with 405,399 killed and 671,278 wounded. It was common for those who served not to talk about the war after returning home. This is the story of just one of the 405,399 killed and how it affected their loved ones. Jerome (Fritz) Burkel was one of those who returned home a hero, but no longer able to tell his story. He was 30 years old, married just before enlisting and being sent overseas. His family’s way of mourning his death was not to talk about him, but rather to move on. I am Fritz’s nephew, and here are my findings about a long-lost, but not forgotten, relative.

This is the story of just one of over 400,000 Americans who made the ultimate sacrifice to save Europe and the American way of life back home. The Burkel family wanted to find a way to remember and acknowledge their unknown relative and decided on awarding a scholarship in his name. It is with pride in their uncle and his contribution to his country that the Burkel family is making a $2,500 donation toward a scholarship in honor and memory of Jerome (Fritz) Burkel. The gift is made from the Burkel Family Fund toward a scholarship from the Salem Glen College Assistance Program Fund, both administered by the Shallow Ford Foundation in Clemmons.

My parents, Art and Pearl, were part of the Greatest Generation, Americans born between 1900 and 1920. Art’s family was typical of farm families of the early 20th century. He was one of 10 children of Flemish, Belgian descent on his father’s side and German descent on his mother’s side. His father came to the U.S. as a young child in the 1860s. Fertile land and “opportunity” in Wisconsin became part of the great Northern European migration to the U.S.

Art’s dad, Edmund Burkel, an enterprising dairy farmer, at the age of 49 was tragically killed in an accident. Only two years later, Art’s mom, Catherine, died of natural causes at the age of 51. They left 10 children, including Art, ages 6-26 trying to keep the farm afloat and stay together as a family. In 1929, the Great Depression hit and the family lost the farm. They stayed together as best they could and the entire family was in “survival” mode.

Art never talked about this period. The memories were painful. Any family history shared was by Art’s wife, Pearl. She was a teacher who was also a good storyteller. But she would only say that Art had many difficult years. She told her children that they had an uncle Jerome, who died in France during the Second World War, but that it best not to bring it up to their dad. She said Fritz was not just a brother, but like a son to Art and that he was too hurt to talk about him.

Now in retirement, I have tried to piece together the Burkel family history for future generations. I wanted to know more about uncle Fritz, the forgotten war hero who gave his life in the Second World War. My brothers, Carl and Jack, and I only knew that Uncle Fritz existed, died in the war and little else. Googling his name with the description “died in World War Two,” a picture of his gravestone immediately showed up. It was in the same cemetery in Green Bay, Wisconsin, where my parents and numerous other relatives are buried. My brothers and I have been to that cemetery countless times, but neither of our parents ever acknowledged or showed us Uncle Fritz’s grave. After all, the Greatest Generation was also called the Silent Generation because they didn’t talk about the hardships of the Great Depression or WWII. 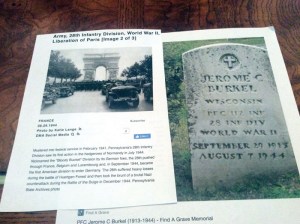 The gravestone as seen in the photo is quite basic and probably the standard military issue. With so little information on the headstone, I was still able to get enough on the internet to open the book on my uncle’s service history. Uncle Fritz was in the 28th Infantry Division and died on Aug. 7, 1944. The 28th Infantry Division was part of Operation Overlord consisting of more than 2 million troops stationed in England from numerous Allied countries that comprised the men that would invade Europe and ultimately defeat the Germans in WWII. The first phase was the invasion of Normandy, France, on June 6, 1944 (D-Day), in which 156,000 troops, of which 73,000 were Americans, stormed and took the Normandy Beaches. Following, on July 22, 1944, the 28th Division landed in Normandy, seven weeks after the initial D-Day landings, and were almost immediately involved with Operation Cobra and proceeded inland. They were accompanied by Canadian troops to the north and British troops to the south. They met significant German resistance in one of the bloodiest battles lasting several weeks. It was during this time that PFC Jerome (Fritz) Burkel, was mortally wounded and later died on Aug. 7. He was awarded the Purple Heart for his service and sacrifice to his country. Less than a month later, the 28th Infantry Division would be instrumental in the liberation of Paris and continue the fighting into Belgium where they would also be in the forefront of the Battle of the Bulge and ultimately the first Allied troops to enter Germany. Jerome (Fritz) Burkel was no longer with them, but along with the thousands of other fallen brothers significantly contributed to this monumental event in U.S. history. The 28th Infantry Division had a total of 2,165 killed and 11,974 wounded.

Veterans Day is a time to remember and appreciate those in our Armed Forces who lost their lives and, for some, their histories. This year, one lost hero, Jerome “Fritz” Burkel, has been reconnected to family and, through a scholarship, will be family-honored for his service and sacrifice. For more information about the Jerome (Fritz) Burkel Scholarship, contact greg@shallowfordfoundation.org.