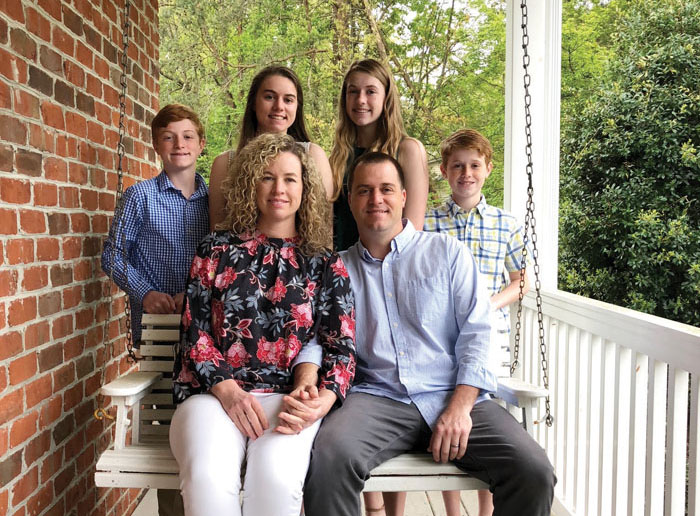 Kevin Spainhour with his children, from left, Peyton, Hannah, Bree and Will, and his wife, Laura.

Kevin Spainhour grew up in King as the youngest of four children. “The closest sibling in age was 10 years older than me, so many times they were almost like second parents,” remembers Spainhour. Being an athletic-minded family, Spainhour was often coached by his older brothers in either soccer, basketball or baseball. “In high school, my older brother, Dan, coached me in basketball and baseball, which was a lot of fun. He also taught at the high school, Bishop McGuiness, where I attended and graduated from,” recalls Spainhour.

When Spainhour wasn’t playing sports or spending time with his family, he was very involved in his church and with their youth group program. “Some of my best friends are people I was in church with as a kid,” says Spainhour. “That community was an influential part of my life.” During high school, Spainhour discovered how much he enjoyed mentoring other kids. “I began helping with youth sports myself when I was in high school. That’s where I developed a love for coaching and encouraging players,” explains Spainhour, who coached at Jerry Long YMCA and Bishop McGuinness camps to name a few.

When Spainhour headed to Guilford College, he continued coaching during his summers at basketball camps around the state. “I played basketball all four years at Guilford, and that allowed me to establish time management, structure, discipline and routines as a student athlete,” describes Spainhour. “I went to Guilford knowing that I wanted to go into education. I’m probably one of the few that actually used their degree after they graduated,” jokes Spainhour.

During Spainhour’s sophomore year at Guilford, he met his future wife, Laura. “Laura was also part of the basketball program and was a phenomenal player. She was a lot better than I ever was and was even inducted into the hall of fame at Guilford. Her jersey is retired there,” says a proud Spainhour. With a shared common interest in sports and education, the two were married a few years after graduating from Guilford. “I had considered coaching in college, but realized the good Lord had other plans for me,” recalls the newlywed after he received his master of education in sports administration from East Carolina University.

Kevin and Laura decided to head back to the Winston-Salem area and began teaching. “Initially I taught and coached middle school students at Chestnut Grove for three years,” says Spainhour. “Then I began teaching physical education, science and coaching varsity boys basketball at the high school level.” After getting 10 years under his belt at the high school level, Spainhour realized he wanted to go back to school at Appalachian State University to earn his educational and leadership in administration license. In 2012, Spainhour became assistant principal at West Stokes High School. Spainhour stayed in that position for almost nine years. “What I have loved about administration is that you get to be a part of the bigger picture. You have to consider all angles of a decision, and how it impacts the greater good of a school community,” notes Spainhour.

Spainhour’s leadership style and way of getting people together with a shared purpose to reach a common goal made him a natural fit for principal at West Forsyth High School. Starting off the 2021 school year at West, Spainhour is grateful for the opportunity to work in a school where he has already seen such a strong sense of community and work ethic. “As a parent of four children, Hannah (19), Bree (18), Peyton (15), and Will (13), I can relate to many of the same things that the parents are going through at West. We are stepping through parenthood with teenagers together, which helps keep me feel grounded with what our young people are doing. It also helps me relate to the students even more at West,” says Spainhour.

Being a dad to four active kids leaves little time for Spainhour to partake in outside hobbies. “My oldest daughter is playing basketball in college at Emory and Henry this year as a freshman, and my other kids have developed a love for sports too. If I’m not at their events, I am at West going to a game, national honor society induction, drama practice, or any number of events. When the bell rings, my day doesn’t end at West. I like to be present. I can’t be present for everything; however, I do like showing the students that I have an invested in what they are doing,” relays Spainhour. “Much like the values Laura and I foster at home: being a leader, good teammate and friend, I try to implement at West. Sometimes we can get caught up in test scores, but I also value the importance of raising and encouraging them for the greater good. I have abundant hope for their futures,” says Spainhour.