Bless Your Spoon: Worldly cuisine with a local focus come together 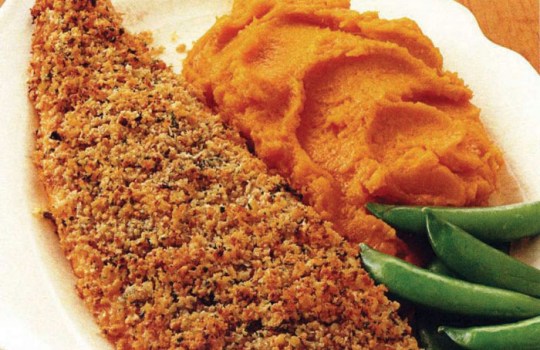 Another treat from the high country, Almond Crusted Trout, is served with Apple Chutney and your favorite sides. 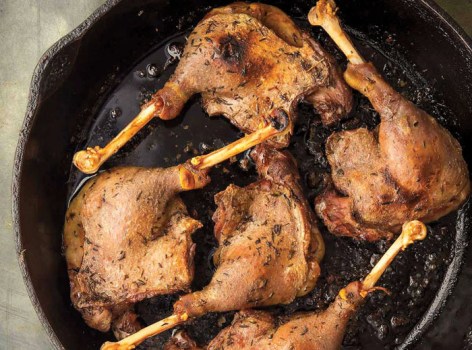 Duck cured and smoked with a Grape Compote is a favorite entree on the menu at Timberlake's Restaurant. 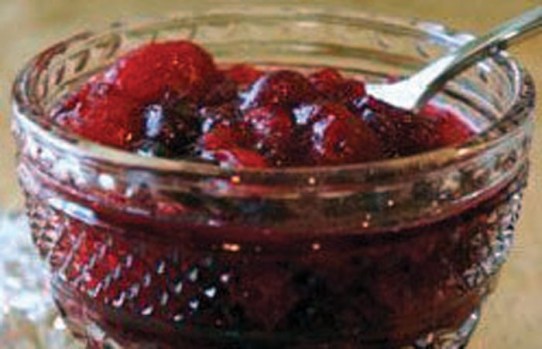 A spoonful of sweet Roasted Grape Compote accents the taste of any savory meat. 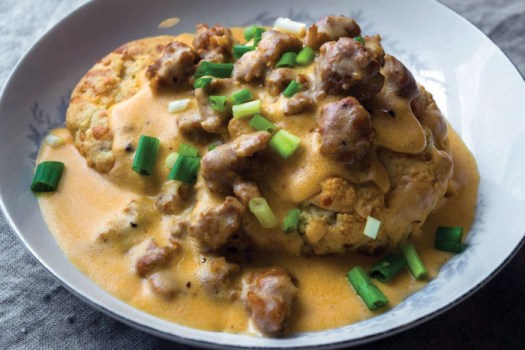 A popular dish, Pork Chops are smothered in Chorizo Gravy - also to be enjoyed over hot biscuits.

The restaurant’s menu at Chetola Resort in Blowing Rock reflects the worldly tastes and culinary influences of Executive Chef Matthew Rivers.  The diversity of the menu might be considered the culmination of his experiences. But having been born and raised here in N.C. — he also stays focused on his heritage — often adding a touch of Southern twang to his dishes.

Rivers has been at Timberlake’s Restaurant for about six years. He’s both food and beverage director, overseeing all operations for the restaurant and special events. His menu changes seasonally — usually twice a year at spring/summer and fall/winter with special features offered at the arrival of each new season. For each menu change, Rivers researches seasonal ingredients that best represent what’s available at the time. He then incorporates those — getting creative with dishes that combine various cuisines with his more worldly taste preferences.

Due to his wife’s influence, Asian fusion cuisine is probably the strongest influence on the menu. But I can also see a Japanese influence with sushi, and Korean — the ribs play on that. There’s also a little authentic Italian represented, as Rivers worked under an Italian chef, as well as French and intercontinental influences — with delicious Hawaiian prawns featured on the menu. The selection of entrees represents different foods from all over the world.

Having gone to high school in Avery County, Rivers has lived in the high country for over 20 years. He began life as a foodie. His dad and brothers were in the restaurant business for a while — so food’s always been a big part of his life. As a young boy, he wanted to eat as many different foods as he could.

His mom is an inspiration, as well. She’s an awesome cook who taught herself basic Southern cuisine — many of her recipes are ones she concocted.

“She cooked almost every night of the week except one — that night was called the ‘fend for yourself’ night.’ ”

Rivers and his brother would put a meal together, making up recipes from whatever was available in the pantry and refrigerator — much like their mom did.

Once Rivers got into his preteens, he began wanting to learn how to cook. He grew up watching Jacques Pepin and Julia Child on PBS — the pair cooked together, bringing French cuisine into the American household back in the ’80s before there were TV networks. As a boy, he dreamed of being a TV chef — long before he was old enough to have a job.

Later, Rivers took culinary classes in high school, but he didn’t go to college for culinary training. Although he was accepted to Le Cordon Bleu College of Culinary Arts in Atlanta, Rivers decided not to go due to the expense. While training under great chefs, he was advised to save his money — he could be taught everything he needed to know.

Rivers started working at the Banner Elk Café as a dishwasher. He landed a job later rolling sushi at the Corner Palate. This restaurant had sections on the menu that reflected different areas of the world — literally all four corners. From Linville Ridge Country Club, Rivers went on to Westglow Resort and Spa in Blowing Rock — a Relais & Chateaux property — with one of the most famous restaurants in the world. Here, the young chef learned much about local ingredients and created a small menu that fed only 30 people a day — one he personally designed. From soup to entrée to baked goods — he did it all himself. He became the executive sous chef — and was there four years.

Running a restaurant is challenging while trying to keep up the quality of food for the large number of patrons he serves. Staying current with food trends, Rivers is always trying to improve his meal selections. While the menu was more casual when he started, the executive chef has taken it up a notch. His goal is to continue to bring a fine, quality dining experience to folks while maintaining a casual atmosphere.

Rivers enjoys going out and chatting with folks — especially on weekends when he has more time. He had a few words about the restaurant’s namesake, Bob Timberlake.

“I’ve met him on multiple occasions — I go out to talk to him and check on his meal. He’s very quiet and never draws attention to himself — he doesn’t even call ahead to tell me he’s coming.”

Often, customers aren’t aware they’re sitting right beside Timberlake — even while he’s sharing his favorite fishing spots with them.

“That’s how Bob is — so humble and casual — just a super guy. He’s so down to earth and such a nice, cool man,” shared Rivers.

A great quote by Timberlake is written on the wall of the restaurant that reads, “I don’t know how to cook, but I know people who do.” Without a doubt, he discovered a talented chef who’s eaten his way around the world.

While Rivers has fulfilled his life’s desire, he’s still learning and perfecting his culinary skills — and still buying more cookbooks. Recently, he participated in the North Carolina Restaurant and Lodging Association’s cooking competition where he won the People’s Choice Award for Best Savory Entrée.

As a result of the win, Rivers became a culinary ambassador for Got to be N.C. — a part of N.C. agriculture that encourages people to cook with anything produced in the state.

“We’ve been trying hard to get more local ingredients incorporated into the foods we create.”

Making a conscientious effort to improve every day, his mantras is, “Better today than we were yesterday, and better tomorrow than we are today.”

As Rivers reflected upon his past, he had this to share: Learn as much as you can from as many people as you can. From your grandma to professional chefs — they all have something you can learn. He learned a lot from his mom and grandma — those down-home Southern foods like collard greens and mashed potatoes. His family still keeps a garden to this day — for one simple reason: food just tastes better when you grow it than when you buy it at a store. Rivers also knows a lot about canning and preserving food that lasts all year long — he grew up with no waste.

His mother is a florist and a gardener. She keeps a little old-school Rolodex of his great-grandmother Brown’s recipes. The card notations reflect his grandmother’s way of cooking back then — a pinch, a touch, or a handful of this or that.

“I’ve incorporated the cookie and cake recipes I grew up with — they’re still some of the best desserts I’ve ever had.”

Timberlake’s Restaurant at Chetola Resort is open to the public every day of the year including Thanksgiving and Christmas days and serves breakfast, lunch, and dinner. After being featured in the October issue of Our State Magazine, reservations for Thanksgiving sold out in two hours, and they’ll be serving about 600 folks that day. The restaurant will begin taking reservations for Christmas Day on Dec. 6. So be sure to call early.

Prick duck skin with a small knife multiple times to allow fat to escape. Season duck legs with cure mix and let sit for at least 24 hours and up to 48 hours. Rinse and dry duck. Smoke for 1 hour then layer in large pan and cover with duck fat. Wrap pan in plastic wrap and foil and place in 300-degree oven for 3 hours or until tender. Let duck cool in the fat.

In a mixing bowl, add grapes, thyme, salt, pepper and oil. Toss to combine. Roast grapes at 325 degrees on a liberally sprayed parchment-lined sheet pan for 20 minutes. Then place roasted grapes, cranberry juice, port, and garlic in a medium saucepot and cook for 10-15 minutes until desired consistency has been achieved. Adjust seasoning if needed.

Pulse almonds in food processor until desired consistency. In a large mixing bowl, add almonds and the rest of ingredients and stir to combine. This is enough for 6 trout filets 8-10oz each. Place trout flesh sides into almond crust to coat trout. Cook in a large skillet with 2 tablespoons oil over medium heat for 5 minutes or until crust is golden brown. Flip trout over and cook for another 5 minutes. Remove from pan and repeat with remaining trout filets. To plate, top each trout with 3 tablespoons of apple chutney and pair with some rice and green beans or your favorite sides.

Combine all ingredients in medium pot and bring to simmer over medium-high heat. Reduce to low and cook for 20-30 minutes or until apples are cooked and onions are translucent. Remove cinnamon stick. Thicken with cornstarch slurry if needed.

In a medium saucepot, saute onion for a few minutes over medium heat until translucent. Add garlic, and cook for another minute then add chorizo, and cook until chorizo is fully cooked. Strain chorizo mix, discarding fat, and put chorizo back in pot, and add heavy cream, sherry vinegar, salt and pepper. Cook over medium heat until cream has dime-sized bubbles. Use 1 tablespoon cornstarch and 1 tablespoon water mixed together for thickening if needed to reach desired consistency.

Slice sweet potato thin on a mandolin or use vegetable peeler to get long thin strips. Fry in oil until crisp, turning over once. 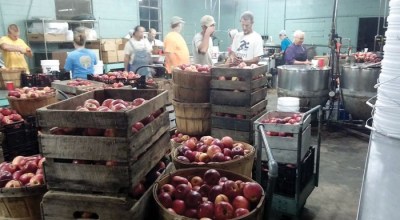 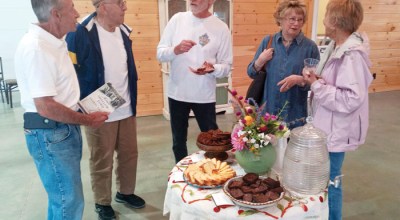 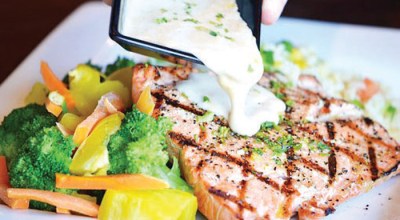 Bless Your Spoon: Wildacres Retreat a gift for all senses