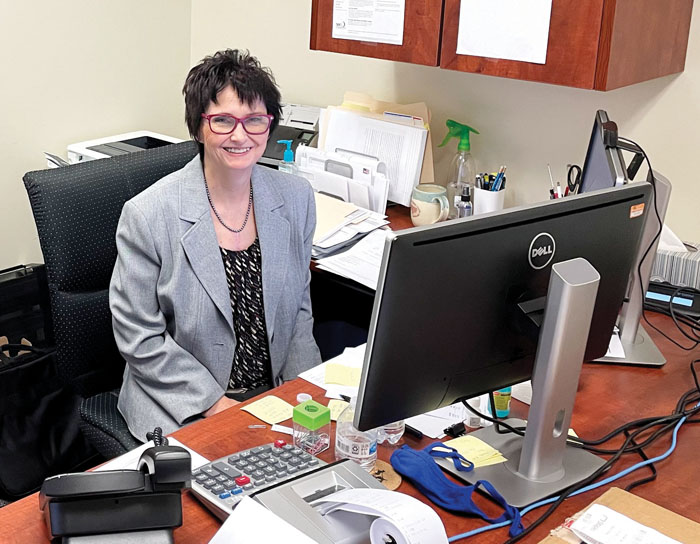 Whether it’s budgets or audits — or anything else related to numbers — everything always adds up for Ann Stroud.

The longtime finance officer for Clemmons has received the Certificate of Achievement for Excellence in Financial Reporting from the Governmental Finance Officers Association for 13 consecutive years and has presented a balanced budget on time for all 30 years that she has worked for the village.

Stroud recently received a certificate in a council meeting recently recognizing her three decades of service.

“It doesn’t seem like it has been that long,” Stroud said. “So that’s somewhat of a surprise. It’s always nice to be recognized and appreciated for what you do.”

Stroud has seen lots of changes in her time on the job as Clemmons has seen significant growth after being incorporated in 1986 and now having more than 21,000 residents in the most recent Census.

“We had not really started a lot of the services that we provide now,” Stroud said of those early days. “We didn’t even have a contract for public safety. The main thing back then was getting the sewer system done.”

That was a big thing then. Now, there’s more — much more — with multiple departments and services provided, grants being sought, etc. Stroud, the only employee who has worked in Village Hall the whole time since it opened in 1994, is now one of 23 employees.

“Probably the hardest part is trying to keep track of all the different moving parts,” she said. “It’s just the volume. Now on top of everything, we have the American Rescue Fund money. It’s wonderful getting this money, but it’s also a lot of regulations and guidance because it’s federal money.”

Even though she carries the biggest burden with the finances, she is quick to spread the praise to others in the office.

“The department heads all are very good about helping me watch their budgets,” Stroud said. “It’s not just all me. We have good staff people and management here.”

Mary Cameron, who was first elected to council in 1993 and has worked with her for by far the longest time of any elected official, said that Stroud is one of the most important people connected with the village.

“When I was first elected, I had been attending council meetings for four years, so I knew a lot about the council but next to nothing about the finances of the village,” Cameron said. “Ann sat down with me for about two hours and went over every aspect of the village’s finances in a way I could understand — no easy task.

“She is someone you don’t have to question. If she says it, then it is true, and that is proven every year when we are audited. She is the quiet one who keeps the rest of us in line. We can always count on Ann and her fiscal knowledge to keep us on the right path. She is an invaluable member of the team.”

Stroud, who grew up and still lives in Davie County, wasn’t really sure about a career path when she headed to Western Carolina to further her education after high school.

“It was just one of those things when you get to college but don’t know what you want to do,” said Stroud, who admitted she always liked math. “You take a class and you say, ‘maybe I’ll do this.’ It was something I picked up fairly easy and liked it and was something I thought I could find work in.”

As a certified public accountant, she landed a job in a small public accounting firm near Statesville, where she worked “doing a little bit of everything” for several years.

“While I was there, I actually did audits on local governments, so I was on the other side,” Stroud said.

But she was looking to “fine tune” what she did, so when the job opportunity in Clemmons surfaced, Stroud was excited about heading the other way down I-40.

“I really didn’t want to work for myself,” she said. “I like having other people around. This works well for me.”

Stroud said that her job has evolved during her years in Clemmons, but the core elements haven’t changed.

“My main job is to make sure that we are staying within the budget that the council adopts, living within that means, and not spending outside of that,” she said. “And reporting good information back to the council and the public to make sure when they do make decisions, they are in good financial position and following state statutes on purchasing and grants and all that kind of stuff along with following all rules that apply. I still do payroll, payables and financial statements.”

Mayor John Wait, who is wrapping up his second and final term as mayor, said that he has enjoyed working with the village staff, calling them dedicated public servants who always put Clemmons first.

“Ann Stroud is a perfect example,” Wait said. “She is friendly, patient with bone-headed politicians (such as myself, ha!) and very good at her job. Each year the village is audited. As part of this process, my performance is also evaluated since I am the last one to review every expenditure of village funds. In every audit I’ve been a part of, Ann’s efforts set the foundation for Clemmons’ excellent marks.

“It starts with her proposing a savvy budget, and making sure through the year that our funds are accounted for and come in under budget whenever possible. Her contributions over the years are a big part of why Clemmons continues to be an excellent community with a very low tax rate. I thank her so much for all her hard work.”

What’s ahead for Stroud after reaching this recent milestone?

“I’m not ready to retire,” she said with a laugh. “I’m here for a while yet. They’re not going to get rid of me that easy.”

Not that Clemmons wants that to happen.

Her boss, Village Manager Scott Buffkin, said that Stroud is “one of the most professional financial officers I have ever known. She has been, and continues to be, a tremendous asset to the village, and I am proud to serve with her.”