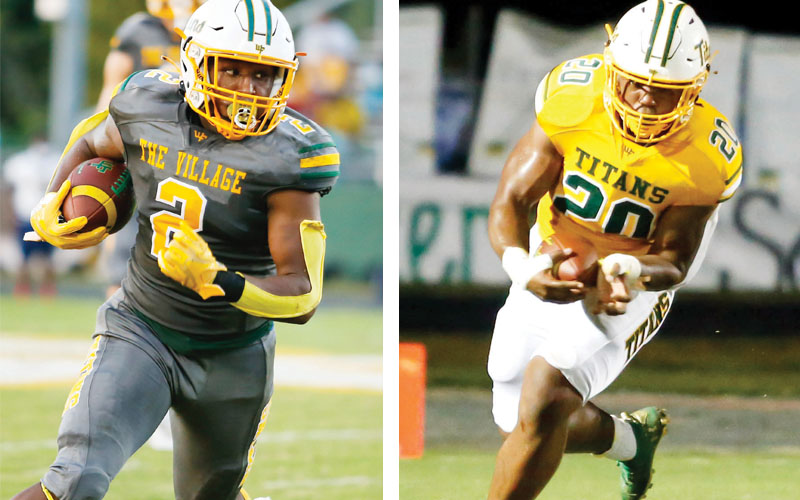 West Forsyth running back Jevante Long, left, running back/linebacker Mack David were selected for this year’s Shrine Bowl team. Unfortunately, due to COVID-19, the game will not take place. Photo by Brad Richard. To view and order photos, go to https://www.ncprepphotos.com/

The Shrine Bowl of the Carolinas football roster was released last week, and two West Forsyth players — running back Jevante Long and linebacker/running back Mack David made the team for North Carolina.

There’s just one problem. For the second straight year, the game, which is usually played between all-star players form North Carolina and South Carolina in December at Gibbs Stadium at Wofford College in Spartanburg, S.C., won’t be played because of COVID-19.

“It’s a good thing. I think it shows what kind of kids we have, that people want to hang around them for another week, which I think is a good thing” Coach Adrian Snow of West Forsyth said. “I just hate that they can’t play.”

The same thing happened last year for a West Forsyth player. Offensive lineman Jared Wilson, who is now playing at Georgia, was named to the North Carolina roster last fall, but the game was canceled because of COVID.

“At the end of the day, there ain’t nothing you can do,” Snow said. “It’s what it is, you move on. It’s an honor to be selected. Now, you’re going to be selected but can’t play. It’s just the way it is. I hate it for our guys.

“At the end of the day, those two kids are great players and great kids. That’s what’s good about it.”

“First of all, both of them (Long and David) are great kids,” Snow said. “You’d want your daughter to date them. They’re that kind of kid, which as coach, that’s probably one of higher things you can give. But they’re just great young men. They handle themselves very well. They represent our school extremely well.”

Long, listed at 5-11, 201 pounds, was the offensive spark plug for much of the season this year for the Titans as they finished 5-5 overall and 3-3 in the Central Piedmont 4-A. In addition to Long and David making it, kicker/punter Andrew Conrad from East Forsyth, and linebacker Albert Redd of Glenn made it to add to the representation from the Central Piedmont 4-A.

“I wish we could’ve had the game,” Long said. “I’m not really as sad because we still got named players on the list.”

Despite the disappointment in not having the game, Long is still able to take some solace.

“To me, it’s very exciting,” he said. “I feel like I’m one of the best players in the state without questions. I feel like that it was my time to shine. I wish we were having the game this year because that would be another opportunity to get my name out there, but just like everything else, I hope people can see that I’m one of the best.”

David, listed at 6-0, 235, was the defensive catalyst for the Titans all season as do-everything linebacker. He also played running back and proved that he was a stalwart on offense and defense.

“I was looking forward to it,” David said. “I think we had tryouts earlier in the year. And I was really looking forward it. And I don’t know exactly what canceled, but I just got reminded of it, like found out that I made it. And so, yeah, it was kind of disappointing.”

Much like many people Long’s and David’s age, Long found out that he made the Shrine Bowl of the Carolinas roster through social media.

“I was in class and my Twitter messages were starting to come through,” Long said. “Like, ‘Tay, you made the Shrine Bowl?’ And I was like, ‘Nah, I didn’t even know.’

“So, I checked my notifications and stuff, and I was like, ‘Dang, well I guess I did make the Shrine Bowl.’ So, I was very excited when I found out the news.”

David found out in a similar way.

“Actually, a recruiter texted me that I made it,” David said. “So, that’s the first time I heard about it. So, they sent me something, congratulations. I was like, ‘What?’

Long realized that he was going to be the primary running back this past season after Nasion Johnson graduated after the spring season.

“It was a very confusing year,” Long said. “I’d say it was a rebuilding year because our spring team was really solid (finished 4-1 overall). We had to rebuild the O-line. We had to rebuild some of the skilled positions, and the quarterback situation we had, but I feel like through it all we played somewhat decent football even with all that adversity we faced before Week 1 even started.”

As one of the catalysts on and off the field, Long’s teammates look up to him.

“He’s such a delight to be around,” Snow said. “He has a great attitude. I tell people, one of the coolest things about him, when we bring in Mack David and let him run the ball Jevante Long was right there in the middle. He’s the largest cheering section.”

As for David, he played some offense last season, but this was the first time he played a significant number of snaps at running back, while also still playing defense.

“It was just one piece where we needed (it) because our coaches, we had to make some moves on offense,” David said. “Chris (Van Kleeck) had to play QB, I went to running back. I played running back since I was growing up, I only played defense really when I got to high school…I knew I had it in me, so I just had to do what they wanted me to do and do what I know I could do.”

Despite his talents on offense and defense, Snow and the rest of the coaching staff had to fight the urge of letting David play many snaps to keep him fresh.

“It makes us all look like we all know what we’re doing,” Snow said of David. “He’s a phenomenal player. Those are kids you want to be around because of just the way they are.

Snow has been through the recruiting process with many of his players over his 14 years of coaching at West Forsyth.

“The numbers are jacked this year because of the fifth-year seniors (that the NCAA granted last year because of COVID), and money,” he said. “…I think he will have something. It’s just where?”

David is all too familiar with the recruiting process. Not only is he a player being recruited, his father, Brent David, played at Carver and went to Appalachian State, and later was the head coach at Carver.

It’s been challenging for David because, despite his immense talent, college recruiters have looked down at his size. According to David, he’s been offered as a preferred walk-on at Appalachian, as well as N.C. A&T, N.C. Central, and UVa.-Wise.

Snow has been frustrated with the recruiting process with David, but he and his coaching staff are doing all they do to convince college recruiters that David’s lack of height means nothing on the football field.

“We’re not talking about going to Carowinds (where you have to be a certain height to get on the rides),” Snow said. “We’re talking about playing football. I think over the years I’ve had some sweat equity with these guys (recruiters). So, I think they can feel confident that if I tell them he can play, he can play. And he can play.”