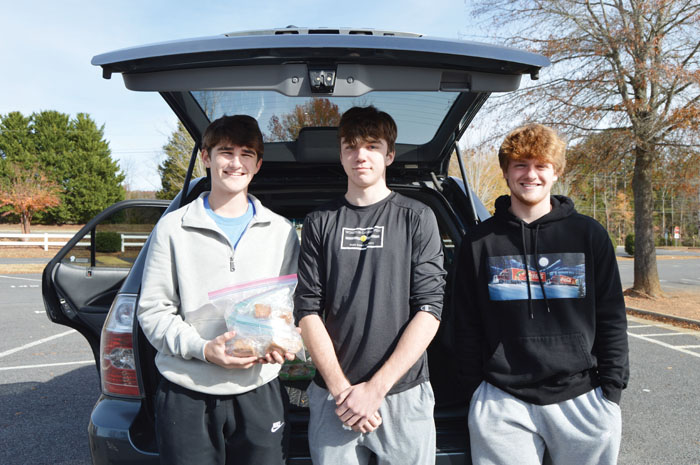 The Interact Club at West Forsyth High School is living up to its name as it works with other organizations in the community to help make the holiday season a little brighter for some.

The club is unique in that officers are not elected; instead their passion for service and devotion to the club exemplifies who is fit to head up important projects.

“Students demonstrate leadership by planning, organizing, implementing and evaluating service activities. We like to say that the leadership rises to the top rather than being voted on,” teacher and club sponsor Leslie Martin said.

One of the officers, junior Carter Andres, who has been a member of the club since his freshman year, is lending a hand to HOPE Winston-Salem this Thanksgiving week. HOPE, an acronym for “Help Our People Eat,” is an organization that uses volunteer support to prepare and bring nutritious weekend meals to the thousands of children in Forsyth County who are at risk for hunger.

“I picked HOPE because I want to help our city, which struggles so much with malnutrition, and provide nutritious desserts to kids who need it,” Andres said.

“This community means so much to me and I just want to give back as much as I can,” Andres said.

The club wants to ensure that people consistently have enough to eat, and Martin is hoping that Interact will work with other clubs to do a school-wide food drive in the near future.

“I’ve read in the Winston-Salem Journal and heard on local radio stations that there is an increased need for food this year and it just breaks my heart that we live in a country as wealthy as the United States, and people in our community are still going hungry,” Martin said.

She said the drives in past years have been extremely successful.

Interact Club also works closely with the Rotary Club in Clemmons. In December, the Rotary Club will collect gifts, and students from Interact will pack them into gift bags. The following night, students plan to distribute the gifts while serving dinner to groups of underprivileged children.

“It’s nice to help give to kids who don’t normally get gifts on Christmas,” Andres said.

While Andres is passionate about the service opportunities Interact Club provides, he also appreciates  the connections he’s been able to make with his peers.

“I’ve enjoyed being a part of it the past few years because it’s a little bit smaller than other service clubs, so it’s more personal. You get to meet more of the kids because the meetings are smaller, so you have a better chance of interacting with more members,” Andres said.

The Interact Club is working to rebuild its membership base in order to participate in a greater number of service activities.

“We are working to build membership back as well as to get more enthusiasm. COVID times really slowed the growth of the club, so we’re looking to get new members, but also get some new energy involved,” Martin said.

Though their numbers may be relatively small, the West Forsyth Interact Club is certainly making meaningful differences in the community.

Janie Peterson is sports editor for the West Forsyth Zephyr.