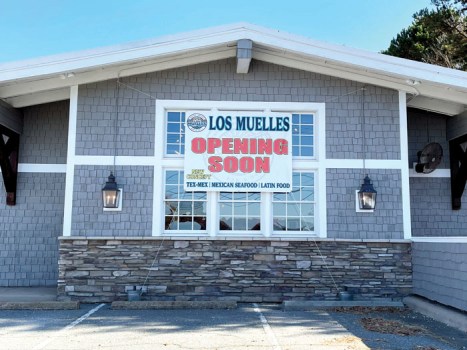 Los Muelles, including a “new concept” of Tex-Mex, Latin food and a variety of seafood and steaks, hopes to open sometime around Christmas in the former Milner Brothers location on Lewisville-Clemmons Road. Photo by Jim Buice, for the Clemmons Courier. 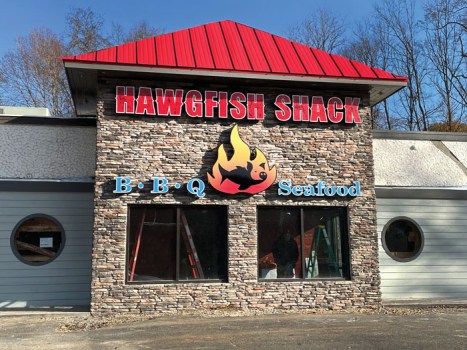 Hawgfish BBQ Seafood Shack put up its new sign last week for a new restaurant that will go in the former Cimarron Steakhouse location on U.S. 158. Photo by Jim Buice, for the Clemmons Courier. 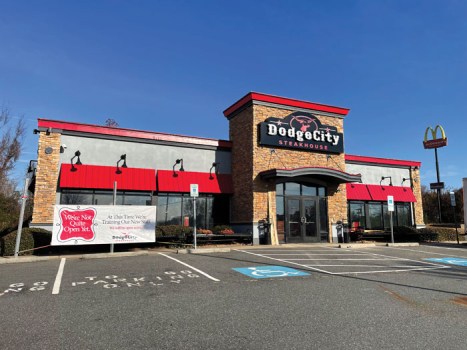 Dodge City Steakhouse is planning to open this week in the former Ruby Tuesday location in Clemmons. Photo by Jim Buice, for the Clemmons Courier.

Coming off the traditional Thanksgiving feasts and looking forward to Christmas holiday gatherings, food remains in the forefront — and a variety of different choices will soon be available with the arrival of several new restaurants in Clemmons.

Actually, Dodge City Steakhouse is planning to open this week with Los Muelles, which is promoting a “new concept” of Tex-Mex, Latin food and “all kinds” of seafood, targeting sometime around Christmas, followed by Hawgfish (BBQ Seafood Shack) in January and Shakeburger (fresh burgers and milkshakes) in March.

Dodge City will be occupying the old Ruby Tuesday building at 6412 Sessions Court near I-40 while Los Muelles is moving into the former Milner Brothers spot on Lewisville-Clemmons Road on the other side of I-40.

Hawgfish is taking over where Cimarron Steakhouse was on U.S. 158 entering Clemmons from Winston-Salem, and Shakeburger is coming to Lewisville where a convenience store/gas station was located just off U.S. 421 across from J Butler’s. Both of these additions are the creation of Alexander Kazakos, who opened Breakfastime in Clemmons several years ago.

Dodge City officials stated their intentions to open the week of Nov. 29 but added that permits and inspections could change that. A sign in front of the restaurant on Monday said: “We’re not quite open yet. At this time we’re training our new staff. We will be open soon.”

Dodge City is owned by the Hodge Restaurant Group of Asheboro and has steakhouse locations in the surrounding area in Asheboro, Elkin, Mount Airy and Wilkesboro along with others in Rocky Mount and Sanford.

The company, which was founded by William and Stacey Hodge, owns a pair of other restaurant chains – Coach’s Neighborhood Grill and Shortstops Burgers and Shakes. Earlier this year, the first Coach’s in this area opened in Harper Hill Commons on Country Club Road in Winston-Salem.

Dodge City is described as a family-owned steakhouse, including a variety of steaks, specialties, burgers and sandwiches, “famous rolls” and cinnamon butter, and desserts.

Amanda Hodge, office manager, said that William Hodge originally acquired the Dodge City Steakhouse in both Elkin and Wilkesboro, which were already in operation, and after that he started opening up the new restaurants on his own. The theme was already set when he bought it – a Western-style theme.

Ruby Tuesday closed in Clemmons in May 2020.

Meanwhile, Los Muelles is bringing a unique offering with a mix of Tex-Mex, Latin American and a variety of seafood, steaks and other items, according to owner Mario Flores, who said he is hoping to open “maybe before Christmas” but it could be early next month.

“It just depends on how things go with a few things,” he said.

Flores said he owns a couple of restaurants in Greensboro, including one named Cacao’s Latin Restaurant & Bar that is similar to the new concept coming to Clemmons.

“We wanted to open another restaurant, and Clemmons has a good population and a lot of business there,” he said. “It’s a good location. This will be a different kind of restaurant.”

Milner Brothers, a popular restaurant with a distinctive concept of its own, opened in 2013 but closed its doors in February 2017.

Next in the projected order of opening is Hawgfish, the latest innovation of Alex Kazakos, who said “the name kind of gives you what I’m doing — hawg for barbecue and fish for seafood.

“The concept will be Texas-style barbecue, and we’ll still do Lexington for the region we’re in, and then we’ll be doing seafood as in a lot of Southern fried, broiled, grilled, burgers, hot dogs, desserts, cobblers and a lot of sandwiches with BBQ. There won’t be any steaks, but we’ll have lot of sandwiches and salads in a family-friendly type of environment.”

Kazakos, who is doing this project with cousin Steve Kontos, said he feels there’s a big market for this type of restaurant.

“There’s no other fried seafood restaurants in Clemmons or Winston-Salem other than Mayflower,” he said. “There used to be so many, but they’re gone. And with barbecue, there’s only Little Richard’s and Real-Q. No one is really doing Texas style. I really think there’s a demand for it.”

In addition, Kazakos said he’s added a 120-seat dining room and another 40 seats in an outside patio while also including a drive-through pickup window and a separate to-go room inside.

Cimarron, which had been in the location on the edge of Clemmons since 2007, closed during the pandemic.

And Kazakos isn’t stopping with Hawgfish as he revealed “another concept” called Shakeburger, which will a drive-through and sit-down restaurant serving up “hand-pattied Angus beef, like a smash burger cooked to order and doing all homemade ice cream, making it myself as well as a huge list of milkshakes that will be created that no one has even done before.”

Kazakos said he also has purchased the former K&W Café on 630 Amp Drive in Clemmons, which closed in July 2019. He said it will serve as his main office and commissary for the  Breakfastime, Hawgfish and Shakeburger restaurants.

“All the homemade ice cream will be made in my commissary,” Kazakos said. “Shakeburger is a project that is only me completely from the ground up. I’m ready for it.”