West girls basketball gets under way with holiday classic 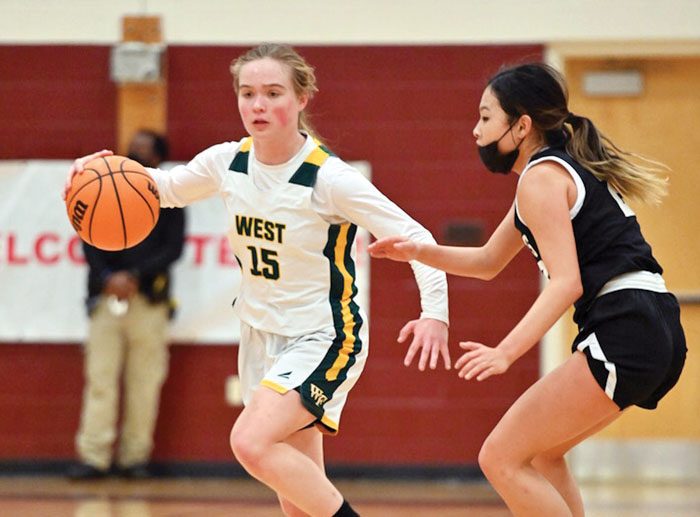 The Titans, who are under first-year Head Coach Catrina Green, played last week in the Bell, Davis & Pitt Bracket of the Mary Garber Holiday Tip-Off Classic as the No. 2 seed at Atkins High School.

“(The outcome of the Reagan game) was tough,” Green said. “We kind of had a Coming to Jesus meeting (last Tuesday) about our energy and effort and mental mistakes, but I challenged them (Wednesday against East Surry in a loser’s-bracket game) and I think they stepped up to the challenge.”

The following day, West Forsyth played in the third-place game at Atkins against No. 4 East Surry. Ki Wilkins led West Forsyth with seven points, and East Surry was led by Bella Hutchens with 15 points and held Shillito to two points, to defeat West Forsyth 52-34.

“We just couldn’t get the shots we were getting (against Reagan) to fall (against East Surry),” Green said.

Shillito made Green’s point about the offense even more clear.

“I think mostly they knew most of our offenses,” Shillito said. “They were cheating most of it, so it was just hard to get our offense running. Our defense was really, really good. We were really aggressive on that. Our full-court, man-to-man — we haven’t worked on it very well, so that was tough for us. So, we need to work on that a lot more.

“But our offense is really hard to run because they knew most of our plays, and we couldn’t get anything else running. We couldn’t make our passes and our shots weren’t falling, so that was a big problem. And we’re just taking a lot of unnecessary shots and forcing a lot of things right into the other teams.”

It’s all a work in progress after just three games.

“We have some good sets that I’ve taken from the previous schools I’ve worked at,” Green said. “And our players get so set on making the first pass in the offense instead of waiting on the offense develop and getting easy things. I did think they were a little more patient (against East Surry). We got a lot more foul calls on our main motion set.

“Everything is a work in progress. We’ve got to understand and work on pass fakes. That was a big issue (against East Surry). Turnovers — throwing it into players’ hands, but our team understood that, you know, once we really execute things we can score. It’s just about making the good read.”

The Titans have talent and depth, but Shillito is likely going to have to be the offensive catalyst in order for them to have a successful season.

“I think everybody plays a big part,” she said. “I just try to be there to set everything up and to help everybody get the ball moving, which I was not able to do as much as I should’ve (against East Surry). I should’ve drove a lot more, passed out, got the team running a lit bit more. I give my hands to Ki today for stepping up, driving the ball in, and doing that, which is what I should’ve been doing today. But I think everybody plays a very big role in our offense.”

For Shilito, she said she tunes out the white noise and tries to go about her business.

“I don’t really focus on what anybody else has to think,” she said. “I let them think whatever they want. I just go out there and try to do the best for me and my team, and just make sure everybody else stays in the game, because if you focus on anything else but the game it could mess your game up.”

The offensive inconsistency showed throughout the East Surry game. The Titans scored three points in the first quarter, 13 in the second, four in the third, and 14 in the fourth.

“I think the energy coming off our bench,” Green said. “I changed my starting lineup today just to challenge some kids, and those kids stepped up when they came in the game in the second quarter.

The players for West Forsyth felt that, despite the loss to East Surry, it still has something to use as a foundation.

“Today (against East Surry), our goal was to keep our energy up,” Shillito said. “I feel like we did very well that game. Just keeping our energy up, we didn’t play very good, but our energy was there. So, I’m hoping that going into the season, where the games really do count, we’re going to keep the same energy and just learn from what we did today.”

Green replaced Brittany Cox Hudson, who missed last season while on maternity leave, and Johnny Hill was the interim coach last season. Hill is now an assistant coach for Green.

“I think as a new coach, definitely the 2 seed was adequate,” Green said. “I think we could’ve won the whole thing, and that was our intention. It was just little things and having two of my starters foul out (against Reagan) kind of crushed that a little bit for us. And it’s just the little mental mistakes of giving Pendleton from Reagan those easy layups instead of boxing her out is what really hurt us coming into today.”

The last five months have been a whirlwind for Green, a native of Greensboro. She was named the head coach in late June. She was living in Laredo, Texas, and was an assistant coach at Texas A&M International when she was named head coach at West Forsyth. She was also getting her master’s degree in sports management through Western Carolina’s online program. She had to move from Texas, get to know the incoming players at West Forsyth, and is now a PE teacher at West Forsyth.

In addition, West Forsyth lost Shakira Baskerville, who is now playing at High Point University, and Alana Gary, who is playing at Young Harris.

“Everything has been a challenge,” Green said. “I’ve enjoyed it — getting to know these players, building their trust, and I’m here to help them. I know what I’m doing. Just earning that trust from them and just getting back into the fill of being back around my family this much. I see my family almost every weekend.

“I’m teaching also, so factoring that in and practicing with the kids, I’ve really enjoyed it. I’m excited about this team and this program, and just continuing to build the West tradition in the conference and in the state…”

The team, despite the two losses in the Garber, is starting to gel with Green.

“Our first scrimmages, we played at RISE — terrible,” Shillito said. “I had little hope, which is not something I should have, especially as a senior. But after the first game at Atkins, I could see we’re ready to fight. I could see we got a lot better, and I see we grow from each game. Whether we lose or win, I don’t look at the scoreboard. I see what we’ve done in the game and we have advanced just a little bit each game.”

Last week’s first week of the regular season will transition this week with games home nonconference games against Forbush and Greensboro Grimsley on Tuesday and Wednesday, followed by a road nonconference game at Oak Grove.

“I think it gives people the opportunity to see what (this) week looks like,” Green said. “It’s tough playing three games in three days. This gives us an opportunity for different people to step up. Maybe somebody had a stellar game the first day, and the second game, not so much. But somebody can step in and fill that role.”

Three games in row for two straight weeks can be exhausting, but the Titans are looking at it as a positive.

“We’re just going to learn from what we did (during the Garber),” Shillito said. “We haven’t played too much. These were our first three games. And we’re still trying to get to know each other. This is almost a new team. We’ve lost a couple players from last year. We have a new coach, very good coach, and we’re just trying to get used to everybody.”

Even though West Forsyth does have a relatively new team, the cupboard isn’t bare. West Forsyth is just three seasons removed from winning the NCHSAA Class 4-A championship during the 2018-19 season.

“I think we’re going to be the team to beat,” Green said. “Even though we didn’t make the championship (at the Garber) I know we’re going to meet these teams again. You know, you may have won this time, but come during the season we’re back 0-0.

Shillito went a step further in describing what she thinks the Titans can do this season.

“I feel like we’ll be ready,” she said. “I don’t care what the fans have to say. Oh, I know, us going second into the game, even our coach says everybody’s out to get West. Everybody’s out to get East. Everybody is going to try harder just to beat us because they know we’re the team to try to beat. So, we can’t really focus on that. We’ve just got to play our own game.”