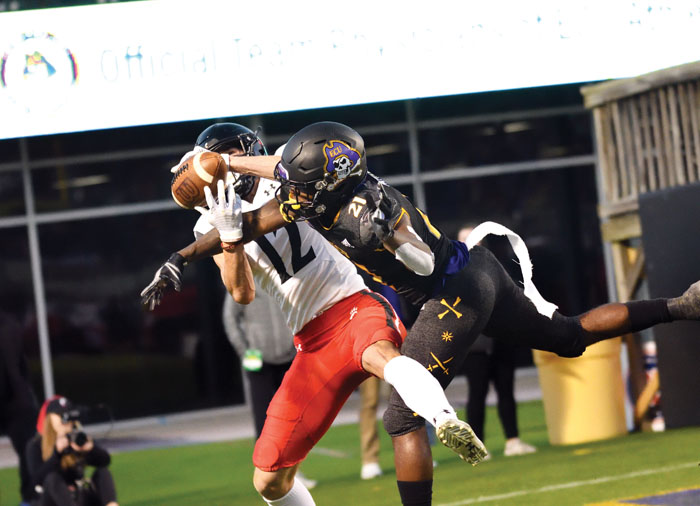 East Carolina’s Ja'Quan McMillian tries to break up a pass intended for a Cincinnati player during a recent game. Photo courtesy of East Carolina University.

Football coaches are always looking for a ball hawk who can patrol the area downfield, preventing the opposing team from scoring.

McMillian, a 5-foot-10, 183-pound defensive back, is a sophomore in his third season for the Pirates. Because of COVID-19, last season didn’t count toward a player’s eligibility. This season, McMillian helped the Pirates to a 7-5 overall record and 5-3 in the American Athletic Conference, after he amassed five interceptions, two fumble recoveries, and 56 tackles.

“I’m always around the ball,” McMillian said. “Just hustling, just playing hard, just competing. and being in the right spot and just doing what you’re supposed to do. It’s as simple as that.”

McMillian will get a chance to add to those stats because East Carolina will be playing in the Military Bowl on Dec. 27 in Annapolis, Maryland, against Boston College.

“Just building up confidence,” he said. “Learning the system. The years that I’ve been here, I’ve been in two systems. My freshman year, I had a different defensive coordinator. Second year, you know COVID happened, and you didn’t get the same training as you did freshman year. And you got a new DC (defensive coordinator, Blake Harrell). You’re still learning his stuff. You’re not as confident because you ain’t been training. 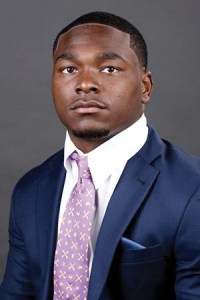 “…My third year, which is this season, everything just kind of came together. I learned the system. I’ve been in the system for a couple of years now. I got that training and conditioning, and just getting my body back to where it was freshman year. And everything else kind of just took care of itself.”

McMillian has totally immersed himself in getting better at his craft.

“This year has been all about ball, just watching a lot of film. Things of that nature,” he said. “Paying attention to details, and then just trusting the coaching.”

McMillian was recruited by Scottie Montgomery, who was the former head coach at East Carolina. Montgomery was fired after the 2018 season after a three-year stint where the Pirates were 9-26 overall and 4-20 in the conference. Houston, who was the head coach at James Madison, was hired that December to replace Montgomery.

“The staff had changed after I committed,” McMillian said, “And it just happened that Coach (Adrian) Snow (head coach at West Forsyth), he had a little relationship with Coach Houston from the past and it kind of connected like that.”

A player never knows what he’s going to get when he keeps his commitment to a school without knowing the new head coach. Brandon Lynch, who was the secondary coach with Montgomery in 2017, was retained by Houston, and was the cornerbacks coach at East Carolina for two seasons. Lynch is now the assistant defensive backs coach with the Cleveland Browns.

Steve Ellis was hired in February 2020 to replace Lynch as the cornerbacks coach.

“It was tough at first, just not knowing who they was going to bring in,” McMillian said. “But once (Ellis) got in and got to know him, him and Lynch have a relationship. He’s cool. He’s taught me a lot. He put a lot of confidence in me. So, it kind of still worked out well for me.”

According to McMillian, he thinks Houston and his staff already knew about him as a player.

“I wouldn’t say prove (myself),” McMillian said. “I think they kind of knew about me…They just didn’t recruit me because I had other FCS (football championship subdivision) offers. And I wouldn’t say I had something to prove because I coming with the staff, so everybody else was new just like I was.

“I just felt like I needed to do what I do. With any other staff, just coming in, learn, do what I need to do, and lead you to coaches. And I thought I’d be fine.”

“(I’m) playing a lot better and got more confident,” he said. “Just trusting my technique. Just being really detailed in what I do, and that helped out a lot.”

Despite being named second-team All-AAC for the second straight season, he was disappointed.

“It’s always room to grow,” he said. “I’ve still got a lot to learn — a lot of training, different body movements. I think I’ve got a ton of stuff that I could work on to get better.”

Having a regular training and eating regimen helped him navigate through this season.

“I went up a lot. I progressed a lot,” McMillian said. “Just having that training, like I said. Building my body back to that armor that you need for this contact sport. And, like I said, that training was everything to me. You don’t realize how much training and the conditioning, and lifting weights is so important to this game of football. That just helped out tremendously.”

“In my first years, the team wasn’t really bonded,” McMillian said. “It wasn’t really a team. That’s the biggest thing. A lot of people are buying in now, trusting the process that it takes to be a winning football team. Everybody’s doing right on and off the field. That bond in the locker room, everybody is pretty much cool. We do everything together. It’s like the bond that really helps out.”

Being in the same system for more than one season has helped.

“The coaches, they put us in the right position to make plays,” McMillian said.

Houston just agreed to a contract extension through the 2026 season that will pay him $2,3 million annually.  Those who wanted to remain at East Carolina and be a part of what Houston is trying to build stayed. Those that didn’t buy into it left.

“I wouldn’t say it was easy, but if everybody is buying in, and you’ve got a team that loves each other, and cheers for each other, and encourage each other that makes it easy,” McMillian said.

There are two other former West Forsyth players at East Carolina — offensive lineman Grant Copeland and running back G’Mone Wilson, who transferred from Marshall. McMillian said he never played with Copeland at West Forsyth. In contrast, he said he played with Wilson for three seasons.

“(Wilson) just transferred in from Marshall this past year,” McMillian said. “And I’ve been here, the majority of my time, here by myself. It’s nice to have (Wilson) here.  Just having somebody that (you) played with in high school, from the same area as you — that’s nice, but as far as making it easier, I wouldn’t say it made a big difference for me.”

One of those special moments in a player’s career is to compete against the best. The day after Thanksgiving, East Carolina played host to Cincinnati. Cincinnati is 13-0 after defeating Houston last Saturday in the AAC championship, and is ranked No. 4 in the last College Football Playoff rankings. Cincinnati, which is the first non-Power Five team to make the Playoff in the first eight years, will play No. 1 Alabama on New Year’s Eve in Arlington, Texas. The winner will play the winner of the game later that night between No. 2 Michigan and No. 3 Georgia.

East Carolina lost to Cincinnati 35-13, but it was still fun for McMillian.

The lines of communication between McMillian and Snow are always open.

“I talk to Coach Snow every week, really,” McMillian said. “Him and Coach (Brad) Bov(ender, assistant coach at West Forsyth). Coach Bov even hit me up sometimes. Both of them came to the Cincinnati game. I gave Coach Bov some sideline passes, so he was really excited about that.”

Now, East Carolina has a chance to play one more game. It’s a bowl game, just two days after Christmas. It’s East Carolina’s first appearance in a bowl since 2014. McMillian said his family, as well as Snow, will be there.

“I talked to (Snow) earlier,” McMillian said. “He already booked him a room.”

“It shows you what we can be,” McMillian said. “The only teams that really beat us is App(alachian, 33-19 in the opening game in Charlotte) and Cincinnati. So, I believe that our record should be even better than what it is now…We’ve just got to keep fighting. So, next year I feel it’s going to be better — turning even more heads.” 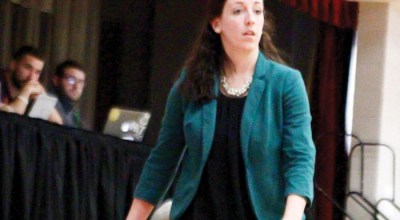 Hometown Hero: Brittany Cox Hudson to be inducted into the Pfeiffer University Sports Hall of Fame

West girls basketball gets under way with holiday classic