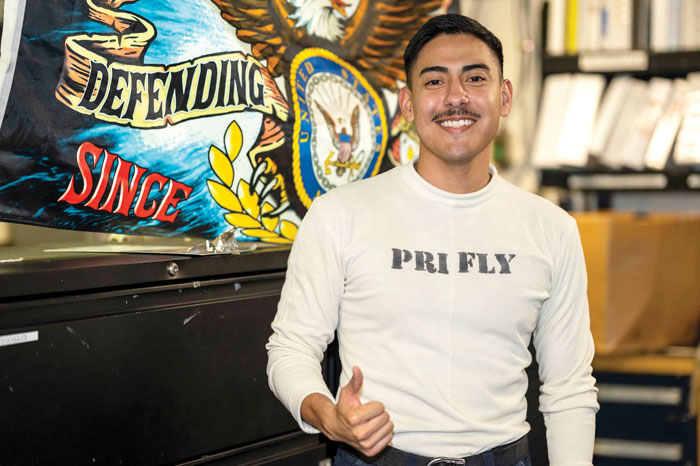 “I handle aircraft on the flight deck,” said Mendoza. “I work with jets, helicopters and other equipment. I’ve also learned firefighting attributes in the case of a crash.”

Mendoza joined the Navy one year ago to serve the country.

“I joined the Navy to protect my family as well as every other family in the United States,” said Mendoza.

According to Mendoza, the values required to succeed in the military are similar to those found in Winston-Salem.

“Growing up, I learned the importance of helping others in my community,” said Mendoza. “If I can, I am always prepared to offer a helping hand. Not everyone can do things alone. In the Navy, teamwork is what runs our operations.”

Homeported in San Diego, California, USS Essex is the second ship in the Wasp-class of multipurpose amphibious assault ships and the fifth ship named for Essex County, Massachusetts. Essex was a 1,000-ton ironclad river gunboat of the U.S. Army and later U.S. Navy during the American Civil War.

According to Navy officials, amphibious assault ships are designed to deliver U.S. Marines and their equipment where they are needed to support a variety of missions ranging from amphibious assaults to humanitarian relief efforts. Designed to be versatile, the ship has the option of simultaneously using helicopters, Harrier jets, and Landing Craft Air Cushioned, as well as conventional landing craft and assault vehicles in various combinations.

There are many opportunities for sailors to earn recognition in their command, community and careers while serving in the Navy.

“My proudest Navy accomplishment has been serving on my first deployment to the Fifth Fleet,” said Mendoza. “I’m also proud to have been recognized for winning Blue Jacket of the Year.”

As a member of the U.S. Navy, Mendoza, as well as other sailors, know they are a part of a service tradition providing unforgettable experiences through leadership development, world affairs and humanitarian assistance. Their efforts will have a lasting effect around the globe and for generations of sailors who will follow.

“To me, serving in the Navy means that you are willing to sacrifice and devote yourself to something much more than just yourself,” added Mendoza. “You take the responsibility to show up and get stuff done in order to accomplish tasks and missions overseas. Time away from home, friends and family means helping the world. Serving in the Navy means building yourself into someone you never dreamed of becoming: a hero.”