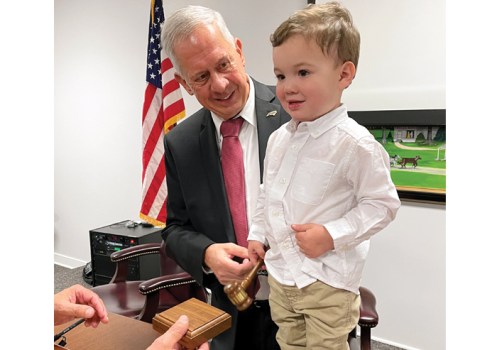 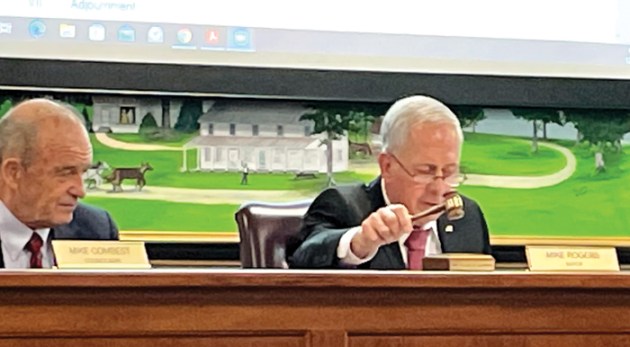 Mayor Mike Rogers said that the $500,000 in state funding that Clemmons will receive will be used to complete work on Market Center Drive 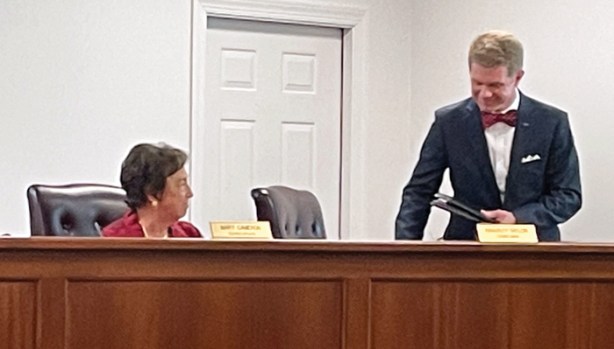 New councilman Bradley Taylor (right) takes his seat up front beside councilwoman Mary Cameron. This is the first time serving for Taylor while Cameron is embarking on her 27th year on the council. Photo by Jim Buice, for the Clemmons Courier. 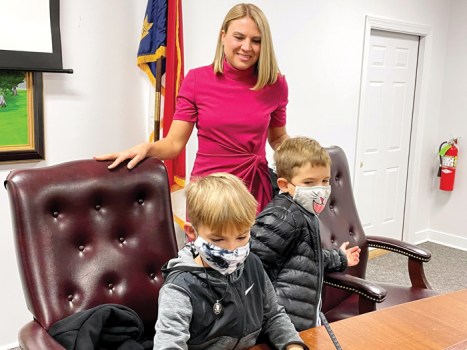 Councilwoman Michelle Barson enjoys a light moment with her twin sons after the ceremony. Barson, the top vote-getter for council in the November election, was sworn in as mayor pro tem. Photo by Jim Buice, for the Clemmons Courier.

It was a changing of the guard during Monday night’s Clemmons Village Council meeting as a new mayor and four council members were sworn in to office.

Mike Rogers was sworn in as mayor, replacing John Wait, who chose not to seek re-election after serving two two-year terms. Rogers, who was in the middle of a four-year term on the council, ran unopposed for mayor in the November election.

For the council, incumbent Michelle Barson, who was the top vote-getter in the election, was sworn in for a second four-term term and also appointed mayor pro tem.

And Mary Cameron, who finished second on the November ballot, also received a four-year term and was sworn in — starting her 27th year as a council member.

Joining Barson and Cameron at the front table on the council is political newcomer Bradley Taylor, who was sworn in after claiming a two-year term by placing third in the election.

The final addition to the board is former councilman Mike Combest, who served a four-year term on the council from 2015 to 2019 but chose not to seek re-election two years ago. Combest took the oath Monday night after being nominated in the Nov. 22 meeting to fill the vacated seat of Rogers and serve the remaining two years of Rogers’ term after he was elected as mayor.

The council also adopted the 2022 meeting and holiday schedules with no changes from this year’s schedule.

In other announcements in what was referred to as an organizational meeting (there were no staff reports), it was announced that village offices will be closed Thursday, Friday and Monday, Dec. 23, 24 and 27, in observance of the Christmas holiday, and Friday, Dec. 31, in observance of New Year’s Day.

Also, during both the weeks of Christmas and New Year’s, the trash pickup schedule will be on a normal schedule both weeks.

During comments at the end of the meeting, Rogers recognized N.C. District 74 Rep. Jeff Zenger, who was in attendance, and noted after the approval of the state budget for fiscal year 2021-22, that “Mr. Zenger did bring home the bacon to Clemmons to the tune of over $800,000 for the Clemmons Fire Department that will help us buy a new fire truck.”

Although there was no other business in Monday night’s meeting, the council held a special called meeting on Dec. 8 to adopt Resolution 2021-R-20 authorizing action to enforce stormwater quality ordinance.

The resolution states that Village Engineer Wes Kimbrell issued a notice of violation on Nov. 16 to Greek Empire LLC (Owner) regarding violations of the stormwater quality regulations of the Clemmons Unified Development Ordinance at 3260 S. Stratford Road, which is the location of the new Hawgfish BBQ Seafood Shack.

Further, it states: “Whereas, Owner has not corrected the violations, and village staff have recommended that the village pursue all available remedies; and, Whereas, the Stormwater Quality Ordinance provides, in part: The Village Manager, with the written authorization of the elected body, may institute an action in a court of competent jurisdiction for a mandatory or prohibitory injunction and order of an abatement to correct a violation of this ordinance.

“Now, therefore, be it resolved that the Village Manager, on behalf of the Village of Clemmons and through the village attorney, is hereby authorized to institute an action in a court of competent jurisdiction for a mandatory or prohibitory injunction and order abatement to correct the above-referenced violations of the Stormwater Quality Ordinance.”