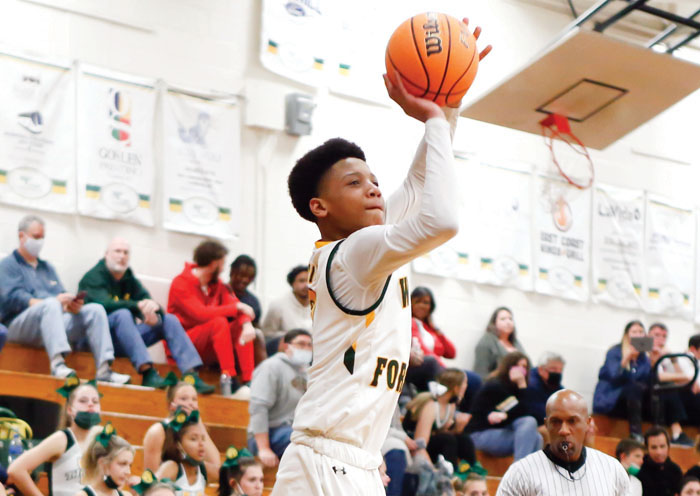 Coach Kevin King of the boys basketball team at West Forsyth summed up its first five games of the season by one word — “inconsistent.”

That was evident last Friday after undefeated Mount Tabor defeated West Forsyth 59-54 at Simpson Gym in the first Central Piedmont 4-A game of the season for both teams.

West Forsyth defeated Forbush 85-76 in the season opener in Clemmons, but it followed the win with a 79-59 home loss to Greensboro Grimsley. West Forsyth won 57-53 at Oak Grove, but lost at Forbush 78-75 on Dec. 8, and then lost at home to Mount Tabor.

“Grimsley beat us pretty good,” King said. “Like I said, we’re down four with a minute and a half to go in the first half. We cut to probably 10 in the second half, and they just kind of pulled away at the end.

“But again, you play Grimsley, you play Mount Tabor, you’re going to find out how good you are because those are two really, really good teams.”

“We play more as a team now and pass the ball more, things like that,” AJ Baskerville said. “(Mount Tabor) was a good team that we played, but we played good, also. Coach (King) said that (Mount Tabor) was the best team in our conference, so if we play another team we’re most likely going to beat ’em.”

Once the Spartans pulled ahead, they dominated the rest of the first half, taking a 37-24 lead.

“I thought the first quarter, we were really good,” King said. “We got the same problem in the last four minutes of the second quarter that we’ve had the last three or four games — foul trouble.

“And I look, Micah (Hudnall) is dead-tired and has to come out, Kenneth’s (Bartlett) in the locker room with blood on his jersey, and then all the other starters all have two fouls. And that’s been a common theme. Jordis (Broadnax), A.J., Bralen (Morris) and Micah have struggled with getting in foul trouble in the first half. And part of it is, we are trying to press and play fast. But you’ve got to learn not to foul. You’re no good to us sitting over there beside me.”

Mount Tabor took a 46-34 lead at the end of the third quarter after O’Shae Fernanders hit a runner with 30.1 seconds left.

“When we get in that position (foul trouble) we don’t have as many ball handlers, we don’t have as many experienced players around the floor,” King said. “It cuts down in the number of places we can make rotations. Because we are going to play seven, eight, nine guys. But now when three of them are out and I’ve got to with number six 5 minutes instead of 21/2.”

West Forsyth clawed back in the fourth quarter and trimmed the lead to 57-52 after White stole the ball and converted a layup with 34.2 seconds left. Mount Tabor pushed the lead to 59-52 after JP Peterkin scored on a layup with 16.5 seconds left. Hudnall was fouled by Peterkin with 11 seconds remaining and made both free throws to make it 59-54, but West Forsyth couldn’t get any closer.

“I thought it was a perfect gauge,” King said of the Mount Tabor game in relation to the rest of the season. “And I told ’em after the game, I said, ‘We stood toe to toe with them.’

“You can go back and find plays that if we make, we have a chance to win the ballgame. And that’s all you can ask every night. They can do the same thing. They could go find 10-15 plays they could’ve done better. Same way.”

Campbell Scurry led Mount Tabor with 16 points, Fernanders had 14, and Peterkin had 12.

“I don’t think (Mount Tabor) is better than us even though they beat us, but we’re one of the best teams in the conference. I can say that.” Baskerville said.

Turnovers are part of basketball, especially, at the high-school level.

“We’re going to turn it over,” King said. “We are, but we can’t add to it by being careless with it. They’ve got to be turnovers that you’re forced into, not because you didn’t pass-fake. not because you didn’t set up a trap. It’s got to be turnovers that happen in the course of the game, and we add to it, and sometimes double it, just by not doing things fundamentally the way you’re supposed to do them.”

Because of COVID-19, high school basketball last season was played during at the beginning of this year. The Titans finished 2-8 overall and 1-7 in the conference.

“It’s really different,” Baskerville said. “We’ve got a huge crowd now. Everybody’s here. I get to practice more. In COVID I couldn’t get in the gym a lot. There wasn’t a lot of gyms open, so it’s a lot different than last year.”

The Titans also have an infusion of new players. Jordan Jones and Bartlett are freshmen, and in addition to White, Zach Holloway is another sophomore on the team.

“So, I tell them all the time. This group likes each other more than any other group I’ve been around here,” he said. “In the four years I’ve been here this group — I have to make them go home at the end of practice.”

West Forsyth continues conference play this week. It played at Parkland on Tuesday and it plays home against Glenn on Friday.

“I think we’re ranked (No.) 2 (in the conference),” Baskerville said. “Because I feel like (Mount Tabor) is the only other team that can beat us. Any other school, I don’t think can compete with us.”

King knows the Central Piedmont 4-A conference as well as anybody, even with Mount Tabor and Parkland joining the conference this season.

“I haven’t seen everybody play,” King said. “Based on what’s coming back, I think we can compete with anybody in the conference. I don’t think there’s anybody we can’t beat, but at the same time our margin for error is pretty slim. And I think that’s probably the case for probably three or four teams in the conference. I think there’s three or four teams that, if they play well, expect to win. If they don’t play well, expect to lose.

“Mount Tabor’s probably the one team that cannot play well and still win. I think the rest of us don’t have as much margin for error.”

“I thought that was about where we’d end up,” King said. “I thought we’d be somewhere between 7 and maybe 11, 12ish, somewhere in that middle of the pack.”

“It’s nice that all the teams (12 in Winston-Salem/Forsyth County, plus, North Surry, Mount Airy, South Stokes, and West Stokes) are included in Frank Spencer, but there is something about being in that old — where it was just eight teams in the county, and it was all for that one trophy that you got to take home for a year and then bring back.”

Despite the disappointment of not being in the Pepsi Bracket, there is still a championship to play for in the WSFCS Bracket.

“Some of that is missing in the bottom bracket, but it is what it is,” King said.

Another twist for West Forsyth will be playing as the higher seed in the first round but having to play against the lower seed on its home court. As of this past Monday North Forsyth was 2-5 overall.

“That is interesting,” King said. “And I’ve tried to figure out, is it better to play — we play on Monday night, so we take (next) Tuesday off, so try to figure all that, but we will play North on their court. But it looks very similar to most of the other gyms county, so other than the colors we should be used to it.”

Regardless of whether West Forsyth defeats North Forsyth or not, it will play next Wednesday in either the semifinals or the loser’s-bracket game. If it wins, it will play either No. 6 Parkland or No. 3 Winston-Salem Prep at 3:15 p.m. on Wednesday. If it loses, an opponent will be chosen for the loser’s bracket. The championship will be at 3 p.m. on Thursday, Dec. 23, at North Forsyth. The Pepsi Bracket final will be at 5 p.m. on Dec. 23 at North Forsyth.

“You’re going to play Monday, Wednesday, Thursday,” King said. “You hope to just keep playing late every day. That’s the goal at this point, is survive and advance.”

Much can change between now and the end of the regular season.

“I think that’s what’s going to happen within the conference is you’ll find out which teams kind of put it together,” King said. “And I think we’ll beat up on each other to some extent. Maybe Mount Tabor’s the exception.

“But I think the rest of us will beat each other a little bit. Somebody in all of that is going to come out of that and finish second or third. And it’s going to be because they quit making mistakes and they got to where they were much more consistent. Whether it’s Reynolds or Glenn or us or East (Forsyth) or Reagan, whoever it is, even Davie (County) — all of us are pretty much in the same boat.”

The season for West Forsyth, according to King, comes down to one thing.

“I said to them in the locker room, ‘Tuesday night (against Parkland) needs to be the start of a winning streak,'” King said. “…My formula’s pretty easy. You’ve got to win your home games. You’ve got to hold serve at home, and then you’ve got to pick off some games on the road. There’s no reason we can’t win both games next week. That puts us at worst, second place in the conference.”