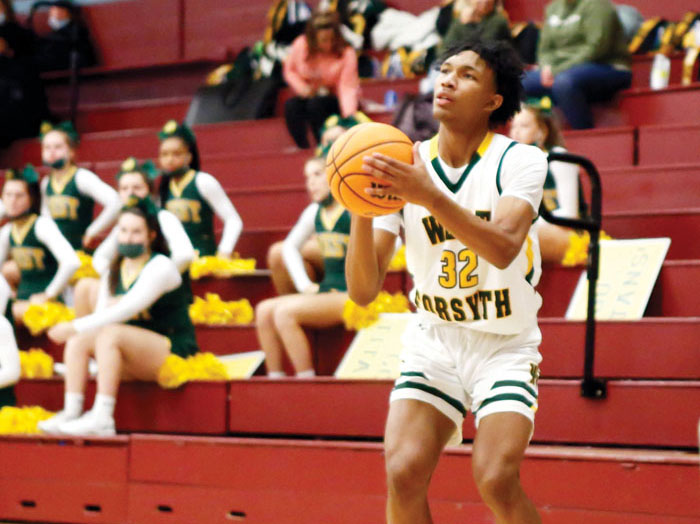 West Forsyth played without Coach Kevin King, who along with his eldest daughter, Peyton, tested positive for COVID-19 before the tournament started even though, according King, he was fully vaccinated and had his booster shot on Dec. 1.

West Forsyth, under interim Coach Michael Lester, lost its first-round game last Monday to No. 7 and host North Forsyth 64-46, but it bounced back the two consolations to defeat No. 4 West Stokes 59-57 last Wednesday in overtime after Jordis Broadnax hit a shot at the buzzer, then trounced No. 8 Carver 58-26 last Thursday morning.

“It was amazing considering it’s the Frank Spencer,” he said. “So, you know, I moved to Winston-Salem almost 24 years ago from West Virginia, and I’ve been to the Frank Spencer every year. And so, to be in such a prestigious tournament for my first head-coaching experience, ‘Wow’ is all I can say.”

Lester found out that he was going to be the interim coach after King tested positive before the tournament. According to King, who was quarantining from home, he watched each of the three West Forsyth games on the NFHS feed.

“It’s harder on television,” King said from his home after the Carver win. “Nobody listens to you when you talk to the television. I also think there was some good to it because I get to see it from much further back. So, I get to see things like, when you’re standing in from of the bench you really only get to focus on the ball.

“That’s kind of where your focus is, is on just kind of the center of the action. But being in your living room and having it on TV you get to see a lot more stuff than what you would normally be focused on. So, from that standpoint it gave me a lot of things that I know we can work on.”

King said his symptoms started with a scratchy throat the previous Friday when West Forsyth played host to Glenn in a Central Piedmont 4-A game. He said that was nothing unusual because he has chronic allergies with the same symptom. However, he said he felt much more run down the following day. He took a take-home COVID test that Sunday and it came back positive. He went to Novant Health last Monday and that test came back positive.

“By that time, it was no question, I felt awful,” King said. “The biggest (symptom) has just been a cough. I cannot quit coughing. I was kind of excited (last Wednesday night) is the first night in the last three that I’ve slept because I didn’t cough all night. I actually slept through the night.”

However, that glimmer of hope dimmed the following morning, the day of the Carver game.

“I woke up this morning, and thought maybe that’s it, but now I have coughed during the day today,” King said. “But I don’t feel bad at all right now. I haven’t had any aches or just bad feeling today.”

King will have to quarantine for 10 days, meaning he will have missed this past Tuesday’s home game against West Stokes. Assuming his test comes back negative, he can come back to practice on Thursday, Dec. 30. Despite being away from the team King still was involved with the team through Zoom meetings, texts, and phone calls.

“Until you see what you’re not doing sometimes you don’t really understand,” King said of the Titans’ players. “You can hear somebody tell you that you’re doing this or doing that, but now when I can show it to you on TV, and you can see, OK, I really am 6 feet from where I’m supposed to be, or I really did not box out right there.”

Despite the challenges, King was appreciative of Lester and how the team responded to him.

“(Lester) has been fantastic,” King said. “It helps that he and I have had a relationship now going back to Reynolds. We both have a similar idea of what the game’s supposed to look like.”

Finding out so close to game time in a tournament was a stressful to Lester.

“It definitely put some extra pressure in the sense that, Oh, ‘OK, I’m the man in charge.'” Lester said of finding out the day of the North Forsyth game that he’d be the interim coach. “What time are we leaving? What route are we taking? You know, changing the defenses, substitutions, instead of telling Coach, ‘Hey, we only have three timeouts left and so-and-so only has so many fouls.’ Now, it’s all on me.”

“So, I’ve had a little head-coaching experience, but like I said, it’s totally different when it’s all my responsibility,” he said. “The substituting, the changing plays on the go, talking to the referees. So, it’s a lot different, for sure.”

The euphoria of finishing 2-1 after losing the opening game may not have happened without the exploits of Broadnax, a 6-foot-1 guard.

According to Lester, Broadnax, who led West Forsyth with 25 points in the West Stokes game, almost won the game in regulation.

“He got a rebound off a foul shot, tie up — possession was ours,” Lester said. “I knew we had it. Just let Jordis isolate, and he went to work and did his thing.”

And do his thing, Broadnax did.

“Just feeling happy,” he said. “It was a good feeling (to have won the West Stokes game), hitting that shot. It was a great feeling. We just keep pushing. Play as a team the next game, and it did help our momentum a whole lot. But it was just, do our thing. Come out and do our thing.”

Broadnax downplayed the shot, but King said he was watching it and felt like he was in the gym instead of watching from home.

“I saw Coach Lester jump and I was glad it was him jumping instead of me on the sideline because it was much more impressive,” King said. “You could actually slide a piece of paper under his feet. And I don’t think you could mine.”

After the game, King called the team in the locker room.

“The biggest thing that I really, really liked about that shot was that he took one dribble, got to his spot, and shot an elbow shot,” King said. “That’s one of the things that we’ve been really, really preaching is don’t just settle for 25 feet when you can get to 15 feet.”

The following day, West Forsyth (5-5) played struggling Carver (1-8) at 9 a.m. at North Forsyth. West Forsyth led 11-7 after the first quarter, but it was all West Forsyth after that. West Forsyth outscored Carver 24-8 in the second quarter to take a commanding 35-15 lead at halftime.

“It was very cold outside. We were tired. We just came out — we were a little sluggish at the beginning of the game,” said Broadnax, who led the Titans with 18 points. “We ended up turning it around.”

One of the main reasons the Titans pulled away was because of the pressing defense.

“We missed a lot of layups at the beginning, but they fought through that,” Lester said. “The fought through the adversity and came through. Anytime you’re pressing and moving on offense, it naturally picks up your energy.”

The players fed off that energy.

“We got out there, we got a little warm in that press, running a lot, and it just helped out everything else,” Broadnax said. “Like offensively, defensively. Legs just got warm and we just got out there.”

West Forsyth was given Christmas Eve through this past Sunday off. It came back to practice this past Monday to prepare for this past Tuesday’s game against West Stokes, the team it just slipped by last week.

And a big thing to Lester was, he had a chance to celebrate his first win as a head coach. Lester was quick to thank coaches who have helped him along the way — King, Howard West, Jeff Overby.

“I knew Coach King from the Reynolds days,” Lester said of when King was an assistant coach with Head Coach Howard West at Reynolds. “I coached with him a couple years at Reynolds, so I think I only have about a thousand more to catch Coach West and Coach Overby (who previously coached at Reagan). So, those are my boys, so I’m very thankful that I learned a lot from Coach West and Coach Overby and Coach King, which enabled me to step in this position and fly with it.

Even though West Forsyth didn’t get to celebrate the WSFCS Bracket of the Frank Spencer Holiday Classic like third-seeded Winston-Salem Prep did in defeating fifth-seeded South Stokes in the championship last Thursday, West Forsyth feels good about last week. Now, it can prepare for the rest of the regular season.

“I thought the fact that we finished the week 2-1 was fantastic,” King said. “I was very disappointed in how hard we played on Monday (against North Forsyth), then I thought having to play West Stokes, and having to find a way to win was maybe the best thing that could happen to us because it wasn’t pretty, obviously. And it certainly wasn’t perfect, but it was much better than it was Monday.”

West’s Johnson on the mend after foot injury