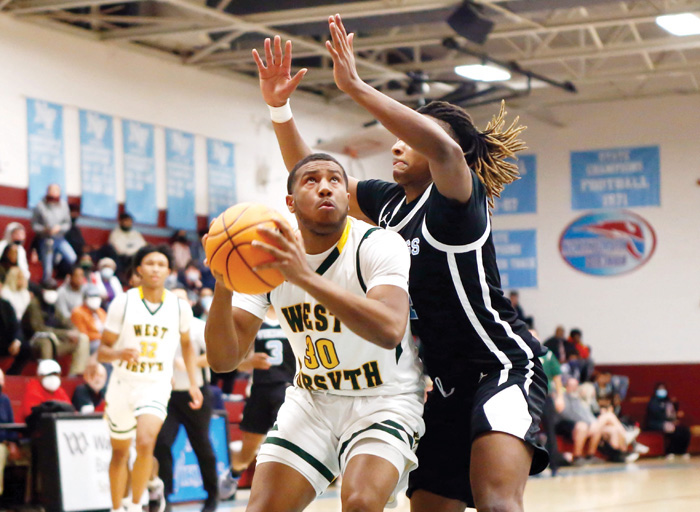 Aquavian Rush is a two-sport athlete at West Forsyth who can do it all on the football field or the basketball court.

Well into his senior season, Rush, who is 5-foot-11, was a safety and linebacker on the football team, and is now a forward on the boys basketball team.

Rush scored two points last Tuesday in West Forsyth 43-37 home loss to West Stokes to drop to a 5-6 overall record, but that only tells a small portion of what Rush brings to the team.

“I kind of try to take what I learn from both sports and apply it to whatever I do,” he said. “Like football, I take aggression, all of that, playing on the basketball court. And basketball, I take footwork and all of that out there, I take it both ways.”

“Honestly, I’m a really big defensive person on both sports,” Rush said. “So, basically, it works hand-in-hand together.”

Watching Rush play both sports at a high level, he’s always at the center of the action as long as he’s out on the field or the court.

“I try to get down and do all the dirty work,” he said. “If we need it, get on the floor, get them rebounds. You know, I don’t score the most. I know all those rebounds and loose ball will help us out in the end.”

Coach Kevin King, who missed his fourth straight game last week for the against West Stokes because of COVID-19 protocols, has still seen every game, either in person or on the NFHS feed.

“(Rush) has been the most pleasant surprise that I’ve had in a long time,” King said. “Because I didn’t really know anything about the kid, and really had no idea he was coming out until football season ended.

“He’s been a tremendous lift. The biggest thing is, he’s a leader. He commands respect. He’s a great kid. He does the right things. He’s everything that you look for in a basketball player.”

Rush’s intense work ethic has rubbed off on the rest of the players on the basketball team.

For many players, not being one of the top scorers on the basketball team would be tough. Not for Rush.

“I just know my role,” he said. “I know that since I’m not going to score a lot, I might as well go ahead and do all the other stuff.”

Rush is one of four football players — which also includes Jordis Broadnax, Kennison Moore and Bralen Morris — who play both football and basketball. Ironically, as of the West Stokes game, only Rush was playing. Broadnax and Moore were both sick, and Morris was injured.

“To be able to see the court you need to be able to make the plays — if somebody didn’t see something, you can tell them, do this do that. Or you see a pass coming that you know you can anticipate it, and you can get them easy steals.”

Michael Lester, who has served as the interim head coach for the Titans, has had a chance to really see Rush and the other football players play throughout the season.

“They just bring a toughness that you can only replicate on the football field,” Lester said. “You know, basketball players, don’t get me wrong, they are tough, but you know, basketball is a non-contact sport. In football, it’s contact on every single play. They just bring that toughness and the energy level, it comes natural to them, more natural.”

Lester went a step further in describing what Rush has provided the basketball team.

Football is part of Rush’s experience at West Forsyth, but he’s proven just how well-rounded he is.

“I told his mom, I said, ‘Y’all have done a remarkable job,'” King said. “He’s an A-student, fantastic football player. I think a lot of it is just his personality. But I also think that football has made him into that type of kid.

“He plays hard. He plays the game the right way. He doesn’t do anything to try to show you up. He doesn’t run his mouth. He just plays.”

Rush has also made an impact with the coaching staff on the football team, including Head Coach Adrian Snow.

“It’s kind of funny because at our (football) awards ceremony Coach Snow told me that, he told everybody that he would let everybody babysit his kids,” Rush said. “I just be myself and keep a smile on my face, keep everybody up if they do something wrong. I’m that type of person. I’m a big team player.”

With the sickness and injuries that have beset the Titans the last couple weeks, Rush’s impact on the team has been even more pronounced.

“It’s one of those that you want to shake his parents’ hands, say, ‘Thank you for raising such a fine young gentleman,'” Lester said.

Counting this past Tuesday’s scheduled home game against Reagan all but one of West Forsyth’s remaining games are Central Piedmont 4-A conference games.

“Nothing but conference (except for the scheduled game on Jan. 26 at home against North Davidson) coming up,” Rush said. “We’ve got to get ready for those games because that’s the ones that really, really count.”

But to do that and have a chance at winning games within the conference, King and the players have to be at full strength.

“Hopefully we get our health back and get all get all 13 guys back on the roster,” Lester said. “It’s hard to scrimmage when it’s 5-on-4.”

As for Rush, he knows his basketball career will be over in a few months. He wants to play football in college, but, according to him, he hasn’t received any offers yet.

“I see myself as a better football player than basketball just because of that scoring part,” he said.

Despite football being Rush’s true love, he carries that passion on the basketball court.

“You’ve got to have guys that are willing to accept their role, and understand what their role is and why that’s their role. And he does that as well as anybody.”

His basketball career will likely end in February or March, and he will graduate from West Forsyth in June. But the memories of playing both football and basketball at a high level on an NCHSAA Class 4-A team will last a lifetime.

“My brothers that I met, my friends — we go out, eat, have fun together,” Rush said. “They’re going to be my friends for life.