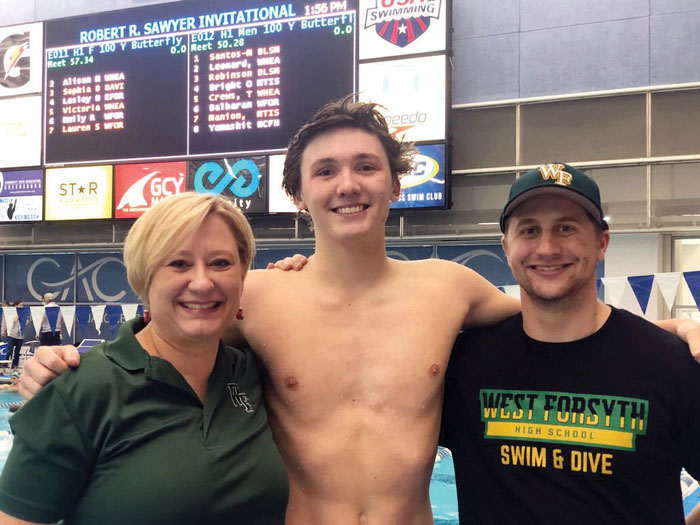 Not for senior Alex Valliere of West Forsyth.

Valliere is deep into his final season as a swimmer at West Forsyth. The Central Piedmont 4-A swimming and diving championships are the end January, the NCHSAA Class 4-A regionals are Feb. 3-5, and the state championships are the following weekend. Many swimmers are probably exhausted after a long season. But Valliere, whose specialty is freestyle, last month just before Christmas, broke a school and meet record in the 50-free at the Robert R. Sawyer Invitational at the Greensboro Aquatic Center.

Valliere’s time of 20.82, broke the school record of 21.05 set by Tucker Burhans, who is a senior at North Carolina. Valliere also broke the meet record, which was 21.34, set by Graham Hertweck of Grimsley. Ironically, Valliere has committed to swim at William & Mary, which is where Hertweck is swimming this season as a senior.

“(Burhans) graduated before I was a freshman (at West Forsyth), so I never really got to know him that well,” Valliere said. “But going back to my neighborhood team he was on Waterford, and swimming at UNC he was just super-gifted. I have always just looked up to him, and always just wanted to be him and be where he was.

“So, being able to break one of his records was really amazing.”

Despite not knowing Burhans well, Valliere thinks of him as a role model.

“Ever since Waterford, since I was a little kid, I don’t think I’ve talked to him at all,” Valliere said. “But I’m just like, ‘Wow. He was fast.'” 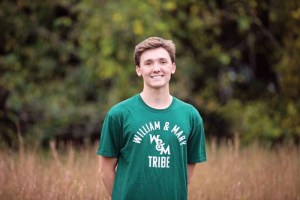 “Going into the meet, honestly I wasn’t even going for (Burhans’) record,” Valliere said. “First of all, all I was focused on was winning the events and trying to win the relays because I was going into the meet with a team aspect, and I was just wanting just to win the meet.”

That mindset changed after what he saw what Hertweck’s meet record was.

“He’s actually a swimmer at William & Mary now, so I was like, ‘Wow, that’d be pretty cool if I was able to get that,'” Valliere said.

With his previous times, Valliere knew he had a good chance to win the 50 free at the Sawyer Invitational.

“My first priority was just winning the event because I wanted the team to win,” he said. “But obviously, yes, I was going for that record. But one thing led to another, and I guess I had a good race and I broke Tucker’s, too, which was a little bit faster than the meet record. So, that was really exciting.”

Sandy Thomerson, who is the head coach at West Forsyth, has had a chance to coach both Burhans and Valliere.

“It gives me a warm feeling to see when (Valliere) did that 50 free and went 20.82, which I got to see Tucker Burhans go (21.05) fast enough,” Thomerson said. “You know, I didn’t think in my coaching career I’d see it beat. And not only did Alex beat it, but he did it by two-tenths (of a second).

“I emailed a couple schools, but William & Mary was the first school that really saw the potential in me,” Valliere said. “Coach Nate Kellogg really thought that I had a lot of potential and I could drop time. So, they were always up there.

“I also visited Valparaiso University in Indiana because I had family that went there, so I’ve always had ties there. But I think deep down William & Mary is always where I wanted to go.”

It was a decision that Valliere pretty much made on his own.

“All I did was strongly encourage him to swim in college because I know it was the best time I’ve ever had,” said Thomerson, who swam at Fairmont State. “And I knew that he would flourish given the opportunity, and I kept pushing him and his mom to try and get him to swim in school.”

Competing in collegiate athletics goes well beyond what sport you play, according to Thomerson.

“There’s a lot of skills — grade-point average and things when you do interviews — but I always felt like people perked up more when you said you had an athletic scholarship in college,” she said. “The discipline that it takes to keep yourself in line to make sure you can still compete and keep your grades up, and work that schedule is like another job. I wouldn’t trade it for the world.”

“One of my best friends, Logan McDonald, committed there,” Valliere said. “So, going there with him is just going to be amazing and such a privilege.”

Despite two swimmers from West Forsyth committing to Willliam & Mary, it wasn’t a package deal.

“Honestly, he talked to me about it. Me going there did not influence his decision at all,” Valliere said. “When I committed there, he wasn’t even talking to them yet. He committed a while after me — a month or two. And once I committed, he was like, ‘Hey, let me just look into it.’

“And then he got a visit there and he just loved it. And I’m like, ‘Alright man, obviously it would be awesome if you were to go there, but I want to make sure that I’m not the reason you’re going there.’ ”

Two Titans swimming collegiately at William & Mary is on the horizon, but there is still plenty more left to accomplish in Valliere’s senior season. The West Forsyth boys are attempting to win the Central Piedmont 4-A for the third straight season.

“I certainly hope we win. There’s nothing guaranteed,” Valliere said. “Obviously, we really want that “Three-peat.” We have gone against East (Forsyth) and Reynolds and (Mount) Tabor, and we’ve won against all those teams. We haven’t lost yet. Obviously, nothing is for granted. We’re going to take it as serious as any other meet because, obviously, this is one of the biggest meets for us as a team as a whole.”

Both the boys and girls should do well in the conference meet, according to Thomerson.

“The boys definitely are maintaining that,” she said. “I feel they have a pretty good chance at regionals. Placing top-three, which would, I think we just missed third place last year by like 10 points or something crazy. So, it would be nice to make top-three at regionals. And the boys medaled in one relay at states. It would be nice to see several events get top-three at states.”

Valliere is planning on swimming four events — 50 free, 100 free, or possibly the 100 butterfly, 200 free relay and 200 medley relay — at the conference meet, regionals, and state meet, as long as he qualifies.

“It’s not that bad because it is a one-day meet,” he said. “The 200 medley will be first. I’ll be fresh for that, and honestly that’s really good because our 200-medley relay, I think we have a shot at winning states. And that’s where our sights have been set all season. And right after that is 50 free, which is perfect because that’s my event. So, I’ll be pretty much rested for those two. And after that is the 200 free, and after that the 100 is the last, which is fine.”

As long as Valliere continues on this trajectory Thomerson thinks he has a real chance at winning the NCHSAA Class 4-A state championship in the 50 free.

“That’s the scary part with the 50 free,” Thomerson said. “One little mistake, you can’t recover from it. He’s just going to have to be perfect.”

And through it all, no matter what happens in the next month with possible championships, Valliere knows that his time as a student and swimmer at West Forsyth is waning.

“I’m trying not to think about it yet,” he said. “I feel like just yesterday I was a freshman. It’s crazy how the time goes by, but there’s no one else I’d rather spend my senior season with than my team at West. And no matter what happens, what happens at conference, or regionals, or states, I’m happy to have a season to begin with and, you know, I’m just going to have fun.”