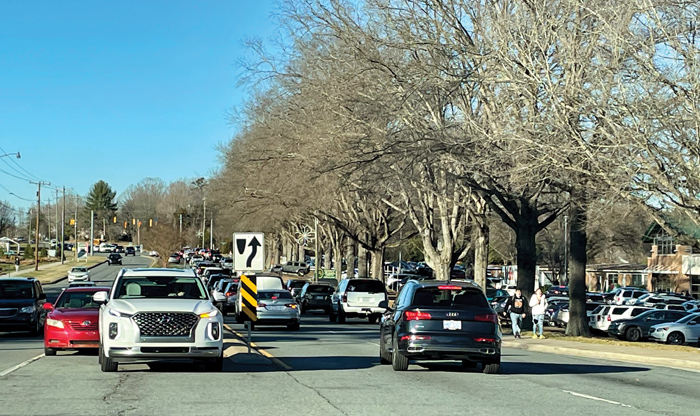 Traffic backs up along Lewisville-Clemmons Road Monday afternoon as other school day concludes at West Forsyth. Photos by Jim Buice, for the Clemmons Courier.

The Clemmons Village Council is taking the next step in attempting to address growing traffic safety issues around local schools by forming an internal committee to work with representatives of the Forsyth County Sheriff’s Office, the Winston-Salem Forsyth County School System and the Department of Transportation.

Council members Michelle Barson and Mike Combest were appointed in Monday night’s meeting to work with the various parties with the goal of creating some type of “road map” to  devise plans to address safety issues with vehicular and pedestrian traffic.

The council received a report from Sgt. Brian Gieger, the head of the Clemmons community policing division of the Forsyth County Sheriff’s Office, during an October council meeting about traffic problems associated with buses and vehicles navigating the gridlock on the roads around West Forsyth High School (with over 2,000 students), Southwest Elementary School and the Montessori School.

Gieger said he met with several supervisors over the School Resource Officer program to seek solutions on how to deal with issues including the flow of buses, vehicles dropping off and picking up their kids, and not enough people to direct traffic.

“From what I understand, the school system is well aware of the issue,” Gieger said. “It’s not just schools here, it’s schools pretty much all over Forsyth County.”

At the time, Village Manager Scott Buffkin said that staff would be willing to reach out to the school board and make sure they are aware this is a concern and what’s going in that area along with Clemmons Elementary School and other similar situations.

The village then moved forward with a meeting in December involving Barson, who organized it, and included Combest, Assistant Village Manager Mike Gunnell, Village Clerk Lisa Shortt and Jonathan Wilson, who is chief safety, security and emergency management officer for the Winston-Salem/Forsyth County Schools.

Wilson advised at that meeting that there are 43 out of 81 schools in the county needing traffic control and that crossing guards are not utilized at high schools.

He added, in notes from the meeting, that there are two traffic control people per high school — one posted at the Clemmons side of West Forsyth (entrance to the parking lot) and one posted around Southwest School Road.

“We learned that the problem is much greater than just the shortage of traffic guards/directors, but rather, as we all know there is an issue with staffing at every level,” Barson said, “so with buses that’s discouraging bus riders so there’s more cars, more cars equals more stacking, more traffic concerns, more safety concerns for the kids walking and more inconveniences for those who live nearby or are trying to get to school on time.

“It all leads into other issues such as obeying traffic laws and a lot of different hands are in this pot of who impacts school safety and traffic.”

Barson then asked the council if she and Combest could be appointed “to tackle this issue and move forward with making meetings with the appropriate other bodies and doing other discovery activities and coming back to you guys with whenever type of approval is needed for a larger next step in providing updates as requested or as we hit major milestones.”

A follow-up meeting with more individuals involved is planned to be scheduled in February.

Mayor Mike Rogers said: “It’s a huge undertaking I can promise you that from what I’ve seen with the traffic backed up on Lewisville-Clemmons Road and concerns around the fire station on James Street and Stadium Drive also.”

Also in Monday night’s meeting, planner Nasser Rahimzadeh reported that the village received an annexation petition for two parcels and 25 acres off of Harper Road on the backside of the Waterford development.

Rahimzadeh said he hasn’t received the formal zoning map amendment request yet but that the developer coming in is “thinking probably RS-15 zoning with a planned residential development. This is outside of the municipal limits, but they need to use our roads to get in to it, so it’s always nice for them to want to annex it rather than not.”

In other highlights from Monday night’s meeting, the council:

• Approved a process for the American Rescue Plan approval authorization after hearing from finance officer Ann Stroud. “They want written policies for almost everything,” Stroud said. “So I am asking for the authority that the manager can approve the policies once I get them written.” In addition, new councilman Bradley Taylor agreed to work with Stroud in the new process.

• Heard that there will be a Village of Clemmons Council special meeting (retreat) on Thursday, Jan. 27.

• Received a stormwater quarterly report from Wes Kimbrell, stormwater engineer, which included notification of the first cost-share project at 2500 Newington Court. The work was completed on Dec. 21 by RCJ Contracting at a total cost of $7,680.

• Heard from Shannon Ford in the Marketing/Communications report that E-Recycle will be Saturday, Jan. 22, from 9 a.m. to 3 p.m. at the Public Works Facility.