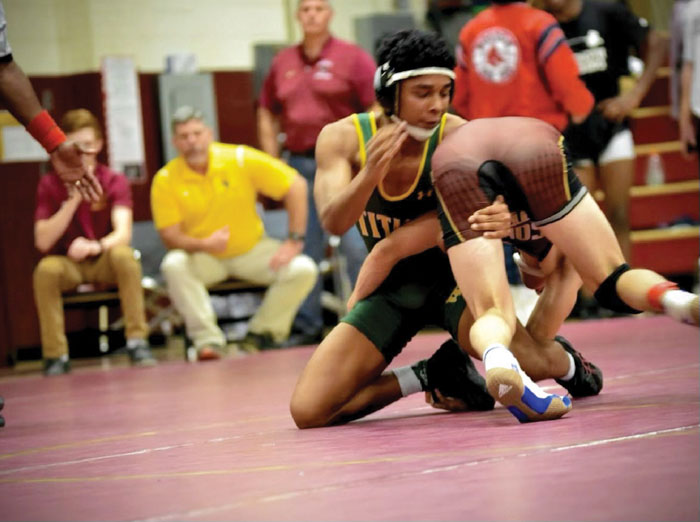 Submitted photo Damian Cisneros (left) is finding success on the wrestling mat and the soccer field at West Forsyth.

There are some athletes that coaches dream of having, not necessarily for their athletic prowess in their chosen sport, but for the type of person they are.

That’s the case for junior Damian Cisneros, who plays soccer and wrestles at West Forsyth. He plays mostly as an outside midfielder on the Titans’ soccer team that finished the season last fall at 20-4 overall, and he wrestles at 126 pounds for a team that is currently 16-0.

“He’s a good one,” Coach Jason Hooker of the wrestling team said. “If you had 14 guys with his mindset and work ethic and commitment, you’d have it licked.”

Jeffrey Williams, the boys soccer coach, went a step further in describing what Cisneros, who just finished his first season on the varsity last November, means to the Titans.

“He is one of the highest-character athletes I’ve also coached,” Williams said.

Cisneros takes all the praise from his coaches in stride, saying that’s the way he was always taught.

“I’m just being a good person,” he said. “My mom tells me to treat people the way you want to be treated. I treat them with respect and they show me some respect, too.”

You’d think with all the praise heaped on Cisneros by his two head coaches that he would’ve competed in both sports for years. However, he’s only played soccer for five years, and, amazingly, he had never wrestled until he came to West.

Cisneros went to that practice blind, so to speak.

“The only wrestling I knew about was WWE,” he said.

The wrestling coaching staff is constantly on the lookout for perspective wrestlers.

“He’s an athletic kid,” Hooker said. “We want them all. I want them all to try wrestling because wrestling is a sport where there’s not a one size fits all. It’s for everybody — any kid of ability, disability, uniqueness — they can do it.”

The uniqueness might be in that Cisneros plays two totally different sports, which require different body types. And making it even harder, the two sports are back-to-back in the high school sports calendar. Boys soccer is in the fall and wrestling is in the winter.

It all started for him in his freshman season after the soccer season had finished.

“I told (Williams) that I was going to be at wrestling practice. And he said, ‘OK. Enjoy it,’” Cisneros said. “Because they’re in two different seasons, so it wouldn’t really collide.”

Although not currently on the team, Williams said that Daniel Bustos and Erick Avila also played soccer and wrestled at one time at West Forsyth.

“It’s somewhat amazing what Damian does,” Williams said. “He still plays club soccer (for NC Fusion). He’s got to stay in condition and use anaerobic and aerobic exercises, for sure.”

And to be at his weight, it takes that extra little bit to be able to compete at a high level in both sports.

He also has to watch what he eats and drinks, whether it be to add a little weight or cut a little weight. Cisneros said that he drinks a lot of water, eats vegetables, chicken and salmon for protein, and trail mix for a snack.

“It’s limited portions,” Cisneros said. “I’ll be a little nice to myself and cut like a half-pizza. It depends on what my parents cook.”

Teenagers are a tough nut to crack when it comes to food, especially athletes.

“We don’t cut a lot of weight,” Hooker said. “This year has been a little different. We’ve had more guys lose weight this year than we’ve had in the past. You want to — there’s a timeline from making them suffer and eating right. A lot of kids don’t eat right. They don’t know a difference between knowing you shouldn’t eat potato chips and sodas and cups of rice and all of this junk that they eat.”

It’s about a coach cracking the facade that an athlete builds about their diet.

Despite the travails of trying to keep his body in tip-top condition, Cisneros has been able to flourish in both sports.

“I am for everyone playing as many sports as possible,” Williams said. “I think it uses different muscles, tactics-wise. You may get some pointers from some different sports. I just remember in high school, I always played three sports….I think a lot of our kids (on the West Forsyth boys soccer team) play (at least) two sports. We’ve got a couple lacrosse kids…I think it’s great. I think it’s a prime example of how Damian makes it work.”

Last year as a sophomore, because of COVID-19, all the sports were condensed. Boys soccer was in the winter and wrestling was in late spring. Cisneros persevered through that and still had summer workouts for soccer and wrestling, as well as camps. And soccer practice started last August. Therefore, Cisneros had little chance to rest his body after a grueling year.

West Forsyth finished the regular season last fall at 19-3 and won the Central Piedmont 4-A with a 13-1 record. It reached the NCHSAA Class 4-A playoffs as the conference’s No. 1-seed, and defeated Charlotte Olympic 2-0 in the first round. Three days later it played South Mecklenburg in Clemmons, but the Titans lost 4-2 in double overtime, ending their season on Nov. 4.

“It was pretty disappointing,” Cisneros said. “It was sad seeing so many seniors leave.”

Meanwhile, wrestling practice started on Nov. 1 and he wasn’t able to start wrestling right away.

“I’ve been used to it for a while because of last year,” Cisneros said. “So, once we lost in the playoffs for soccer I went straight to wrestling because there’s a saying that ‘On your off-days there’s somebody working harder than you.’

“So, I had to go straight to wrestling because I want to improve myself. I don’t really need an off-day. I can just go.”

It didn’t take Cisneros long to transition from a soccer player to a wrestler. However, the West Forsyth wrestling team has also been hit with a bout of COVID. Many of the wrestlers have had COVID, including Hooker, who had to be quarantined for 10 days earlier this season. According to Hooker, the Titans have had to cancel about 20 matches because of COVID.

However, according to Cisneros, he remained vigilant to the virus, and hasn’t contracted it.

“It’s a setback for us,” he said. “I feel we would’ve been dominated teams more if we would’ve had those matches, but I guess everything happens for a reason.”

“It was pretty intimidating to see all the fans cheer against us,” Cisneros said. “We stayed humbled and wrestled.”

West Forsyth improved to 16-0 and are 3-0 in the conference, finishing 5-0 this past Saturday at the Kannapolis Brown Duals.

“You don’t want to come in with that mindset, so we learned from that and hopefully we keep better throughout the year.”

Following the final four conference matches, the NCHSAA Class 4-A dual-team tournament starts Jan. 29 and concludes Feb. 5. The individual regionals are Feb. 11-12, and the state championship is Feb. 17-19.

“Just wrestle and have fun,” Cisneros said. “And look ahead, not look back.”

Because Cisneros is so humble, it may take a little extra motivation for him to see what he can be.

“I tell you, he can be better than he thinks he is right now,” Hooker said of Cisneros. “And it’s going to come on. I foresee it, maybe hopefully in the next few weeks that light switch is going to come on. He’s going to beat somebody that he didn’t think he could beat. That’s when it comes on.”