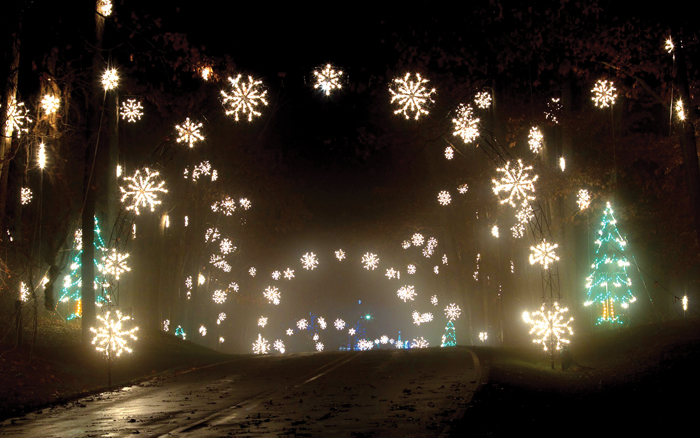 It was another record-setting year for the Tanglewood Festival of Lights, but instead of more vehicles, the 2021 holiday lights show established a new standard with $1.3 million in revenue.

Damon Sanders-Pratt, Forsyth County’s deputy county manager, said that the revenue yield was 45% higher than in 2020, which was the highest year ever.

“Part of that is that we increased the cost to attend,” Sanders-Pratt said. “So that cost went up by more than the number of vehicles that went down. It was about 10% less attendance (57,925) compared to last year (64,057), but last year was the highest year ever of vehicles going to the event.”

Of course, that was during the first year of the global pandemic, and this year’s revenue number was boosted by the reopening of the gift shop — bringing in another $160,000 — and the return of all the special walking and running events that were postponed last year — adding another $21,000. The weather also was a positive with mild conditions overall and no closings for the 30th anniversary of the Festival of Lights.

Last year was expected to be highly successful, in terms of vehicles, due to the impact of COVID-19 and restrictions on crowds gathering indoors for traditional holiday events.

“Last year, they wanted to do something, so they all came apparently,” Sanders-Pratt said. “This year was a little more normal. Raising the rates probably did discourage some people from coming.”

However, that was more than negated by that first price increase in years. Rates went up to $20 for cash and $23 for credit/debit card per family vehicle after being unchanged for years at $15 for cars, vans and trucks.

That not only increased the bottom line for the county (expenses were $675,351, also a record high, for a record net profit of $635,574) but also helped with traffic flow with less vehicles.

Sgt. Brian Gieger, the head of the Clemmons community policing division of the Forsyth County Sheriff’s Office, said that the county upgraded the internet speed where each credit card transaction was processed 10 seconds faster.

Another thing that helped, according to Sanders-Pratt, was keeping the cars stacked in the park and not backing on to the surface street — with the expansion of stacking more cars in the bottom with the four-lane road.

“We can accommodate another 415 cars roughly in the park and not out on the street by turning that road leading to the bottom into four lanes from two,” he said. “So it’s two lanes down and two lanes back as opposed to just two lanes.

Gieger noted that vehicles making it out of the park and onto Clemmons Road only happened about 10 times during the entire lights show, which started in the middle of November and ran through Jan. 1, 2022.

“Everything just worked,” he said.