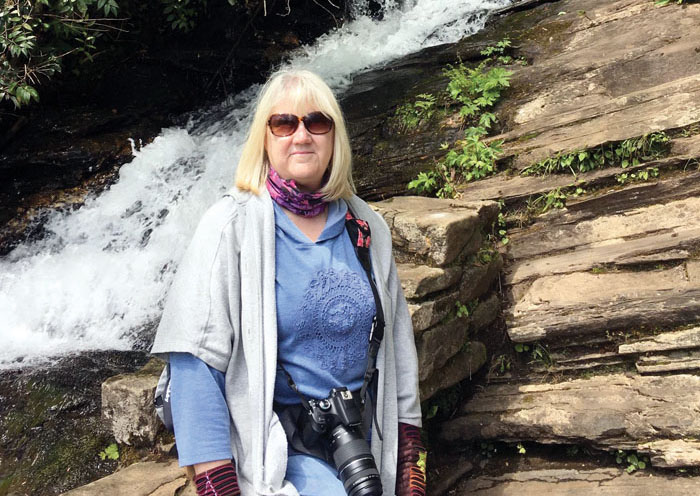 Nancy Tucker during one of her hikes.

Nancy Tucker grew up in the small town of Sweetwater, Tennessee. As the youngest of two children, Tucker knew from an early age she wanted to travel and get out to explore. “My dad was drafted in the Korean War and was stationed in Alaska,” says Tucker. “Although he didn’t want to go into the military because he was playing amateur baseball, and it was the reason he missed out on going to the majors, I still thought it was neat that the military gave you the opportunity to travel,” recalls Tucker.

Tucker’s adventures and explorations took different forms as a child. “I always liked to hike, and I still do. If I wasn’t hiking as a child, I was reading or writing. My mother thought that I was too imaginative, however she never stopped me from writing science and fiction which has always been my true passion,” explains Tucker. “It’s hard to pick one author that inspired me to write as a kid, but I enjoyed reading, “Lord of the Rings” and always respected Stephen King as an author. I loved the way he told a story.”

The aspiring author chose to attend college at Carson-Newman University, a Southern Baptist college in Jefferson City, Tennessee. “I had applied to some larger schools and in bigger towns, but decided to just dip my toes in independence, and was comforted because my brother had attended that university as well,” mentions Tucker. “Computer programming was getting bigger in the ’70s and I decided to double major in computer science and business administration. I also minored in religion.”

“Once I completed my degree, I knew I still wanted to join the Air Force. I had to wait until I turned 21 to become a second lieutenant and spent my summer visiting with friends and family. That fall, I began active duty in San Antonio, Texas, where I started officer training and boot camp. At that point in time, I have never been west of the Mississippi,” Tucker said. It was during that time Tucker began her military career in software testing and IT. “I was able to travel all over just as I had hoped for.”

While Tucker was living and working in Washington, D.C., she met her future husband, Ed. “Ed and I were both working in IT at the Pentagon. We got married in 1982 and lived there for about six years,” Tucker said. “We knew that one day we would have children and start a family. We did that in 1986 when my oldest, Steven was born. I had decided to get out of the military to ensure both Ed and I didn’t have to deploy at the same time while raising our children.” Tucker still continued to work in IT and database administration in the private sector as she raised her son while living in Colorado Springs, Colorado. “It was much easier to have a child there then it would have been in D.C., so I was glad for the move,” remembers Tucker. Two years after Steven’s birth, Ed and Nancy welcomed their daughter, Michelle.

“By the time Michelle and Steven were a little older around the preschool age, Ed got an assignment in Italy to work on North Atlantic Treaty Organization (NATO) business. Steven picked Italian up really quickly and could speak it fluently. By the time I could conjugate the verbs, the conversation had moved on,” jokes Tucker. “I could read and understand it, but speaking it was definitely a challenge. The kids were able to attend school there for several years and enjoyed the experience. We were in northern Italy and lived between Milan and Venice. It was a marvelous experience, and we made sure to take advantage of traveling too while we were there. Luckily, from friendships that we developed, Ed and I were able to take time to travel to places like Paris, France and close friends would watch the children. We would reciprocate with their kids too so they could travel,” Tucker said.

The Tuckers ensured traveling and immersing themselves in the culture was part of their Italian experience. “I loved the way that the Italians cooked. I still cook some of my favorite Italian dishes to this day,” Tucker said. “I also liked the way they approached life.”

The Tuckers took their memories and new experiences with them back to the states when Ed’s tour ended. “Initially we moved back to Mississippi before going back to Colorado for 10 or so years. I thought we would stay there forever once my husband retired from the Air Force,” explains Tucker. However, fate would give them a different hand of cards. “Ed was from the Piedmont area, and after his father died, he was offered a job in Winston-Salem where his extended family resided. At that time, I was working as a database administrator and my boss was flexible with my working remotely. I had been working full time since we moved back to the states in this field,” Tucker said.

In 2006, the Tuckers moved to Clemmons and started yet another new adventure. “Not too long after the move, I decided to devote real time to my writing. All my life I had written short stories and I would sell it under another name. I am very structured. I like to get up at 4 a.m. and write when no one else is awake. Once we had moved from Colorado, I discovered I could actually write a novel. I decided to self-publish after crunching the numbers in 2008. If you go through a publishing house, I was going to make about 5 cents a book, whereas if I did it on my own, I could make $2 or $3 depending on the size of the book,” explains Tucker. She also had the added benefit of knowing how to format a book. “I do pay an editor. I think every writer should have one to look over your book after you have your beta readers and others give feedback on your book. It’s important though to know what you’re paying for up front when you hire an editor,” Tucker said. “A good editor will catch things after all the reviews you’ve done yourself and others.”

Tucker’s first book “Deceived” was published in 2008. “Deceived” began the “Farseen Chronicles,” a fantasy series of seven books that delves into preternatural beings hiding in the human world and magic is abound. If given the power, traveling between dimensions is possible for Tucker’s characters. “The last book in the series called, “Prized” is my most proud because it was a thank you to my readers. They asked for the book, which is something that I never thought would happen to me,” Tucker said.

Tucker’s fan base grew and so did the number of books she continued to write. Tucker began to gear her next books towards science fiction since the previous ones were more fantasy based. “The next series was set in the future. The world leaders created 25 population ships to send the humans elsewhere because the humans had nuked our current planet. Each ship was sent in a different direction, so the stories are about the stand-alone ship,” explains Tucker. “I’ve published two in the series and the third is coming out this spring. The fourth book is coming out next year.” To date, Tucker has published nine books.

Tucker had enjoyed writing so much that she also believed helping others reach their passion was important. “There’s a group that I helped form and belong to, the Renegade Writers Guild. We were comprised of local authors that began writing age-appropriate books for the middle grade (fifth, sixth, seventh grade) reader. We did this for two reasons: One, we thought it would be helpful to provide reading options in that genre that weren’t too explicit and two, it allowed us to train people who had not yet published a book. It’s challenging to learn how to format a book, how to edit a book, and what the steps are to get published (whether self or going through a publisher). We wrote four books in total. All the money we raised from selling those books we gave to a local non-profit called the Dragonfly House,” Tucker said.

Tucker’s passions helped sustain her during the unimaginable hardship of watching her daughter fight brain cancer. “For seven years, Michelle fought hard against brain cancer. Her doctors told us that she was born with the tumor that continued to grow as she did. Michelle persevered and kept a positive outlook the entire time and that included undergoing three brain surgeries. We traveled to Duke often to visit with her doctor there, and he would always ask us first where we were hiking, because she enjoyed doing that too. Michelle liked the adventure and to see the beauty in things that we discovered along the way,” remembers Tucker. “While fighting brain cancer, we hiked all the trails that I did growing up. She made sure that we enjoyed those last seven years together as a family. We found some amazing places together too.”

After Michelle passed last year, Tucker has found she’s finally ready to go back on the trails. “It was hard to go back to hiking after losing Michelle. I’m finally ready to get back out there again to explore. Right now, my time in nature has consisted primarily of going with my dog to Tanglewood. I love the nature that is there each time we go from the hawks, heron, and brave skunks. I also appreciate the Tanglewood deer because they are so used to people. I joke often that they are posing for the photos,” Tucker said with a laugh. “Hiking will happen again soon for me in new places. I am very aware that when I write I am very closed in, but the hiking helps me clear my head,” she said.

Tucker has also appreciated the grounding her church has provided her at Clemmons First Baptist during her toughest times. “We’ve been a member for eight years. What I love is that I learn something new I didn’t know before from our Sunday school teachers and pastor. Everyone is friendly and truly cares about everybody. In this age it’s easy to get sucked into the negativity, and our church is a reminder to focus on others. To me that seems critical and something that has been lost in this world. I have always felt strongly that if you have been blessed you should also try and bless others,” Tucker said.