Hometown Hero: Brittany Cox Hudson to be inducted into the Pfeiffer University Sports Hall of Fame 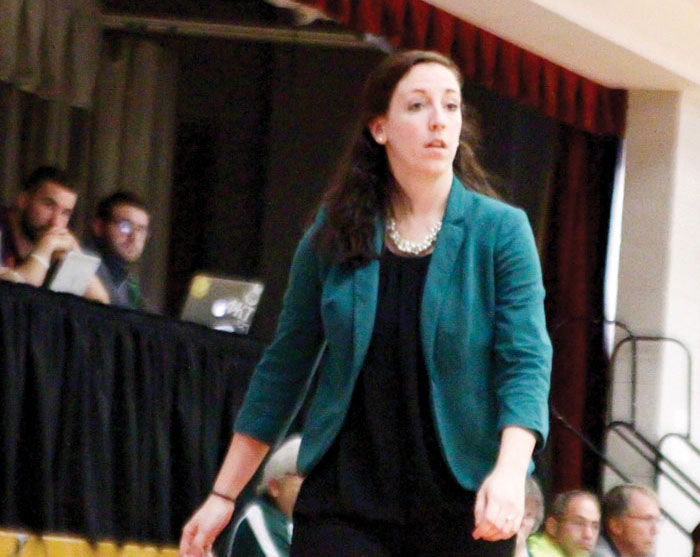 Different in a great way.

Hudson, the former girls basketball coach at West Forsyth who helped lead the Titans to the NCHSAA 4-A state championship in 2019, is now the athletics director at Lewisville Middle School, a school that opened for the 2021-22 school year.

In between juggling all the schedule changes, arranging bus transportation to and from games for the teams, making sure safety procedures are in place during home sporting events, as well as her normal teaching responsibilities, Hudson is also settling into her relatively new role as a mother to her daughter, Sophia, who will celebrate her first birthday soon.

“‘Oh, wow!’ was my initial reaction when I got the news because that wasn’t something that was even on my radar,” Hudson said. “I actually missed the call and wondered if they were calling about a basketball alumni event or a fundraiser, because you always get calls about that. And I thought that maybe they were calling because one of their current players was someone I trained during her high school career, and they wanted to talk about her. It’s really a tremendous honor and I was surprised because that kind of distinction normally happens a little later on in life. It finally started to settle in later that night when my parents joined my husband, my daughter and me for dinner and we had a nice time celebrating.”

Hudson graduated from Pfeiffer in 2013. Among many of her noteworthy accomplishments: leading the Conference Carolinas in scoring during the 2012-13 season with 20.8 points per game, scoring 573 points during the season, which ranks second all time on the single season scoring list, and she was the 2012 Female Athlete of the Year. Hudson also received numerous recognitions for her academic accomplishments as well. In 2019, she received the Pfeiffer Presidential Merit Award, which recognizes distinguished alumni.

Not too shabby for someone who didn’t feel like she fit in when she first arrived on campus as a freshman.

“I trained the whole summer before I went for freshman year,” Hudson said. “I’m a competitive person and I wanted to be ready. And I thought I was. And then when preseason conditioning started, I could barely lift (weights) what all the other girls were lifting. I really struggled with that. I mean, really struggled. And then on top of that, I found out I had asthma. I got to a point where I was really wondering if I had a place on the team and that I was never going to play. But once we got around to doing the basketball stuff on the court, I started to find my groove. That first year got off to a bit of a rocky start and proved to be a real adjustment for me. One thing I did know was that playing at Bishop McGuinness at the level we did for four years really helped me in the long run with my college experience.”

Now, Hudson is settling in for her new life as a middle school teacher and athletics director. And balancing being a mother and wife around that.

For a brand-new school.

“Middle school life is definitely different from high school and definitely fun,” said Hudson, who resigned her position at West at the end of the 2021 school year. “It has challenged me in new ways and made me a better teacher and coach, even though I’m not really doing that anymore.”

Only when she has to, like when she had to spring into action recently to fill in for the varsity girls coach at Lewisville during a practice and game because the regular coach was out sick.

“That was so much fun,” Hudson said. “I left the practice session feeling so excited and jazzed about being out there again, coaching again for that brief moment, being around kids in that kind of environment again. I went hard at it for a couple of days, coached in the game, where we had a great result, and then went home and fell asleep on the couch by 6:45. Luckily, my husband took over with our daughter, as he does.”

One of the reasons Hudson decided to step away from her position at West was because she felt like a middle school schedule would be more beneficial to her family. And as a high school teacher and coach, during the season, there can be many late nights. The early mornings for a middle school teacher — school usually begins by 7:30 a.m. — are nothing new for her. She would regularly open the gym at West for her players who wanted to get a little extra work in before school. And being a parent now, the early mornings with a child are always prevalent as well.

But Hudson relishes those moments with Sophia. Whether that’s picking her up from daycare after she gets out of school around 2:30 to head for a fun afternoon in the park, provided there isn’t an athletic event at school she needs to be there for, or having her daughter brought to school by her husband or fellow teacher and “No. 1 babysitter” Madison Baity to hang around mom while she is in her element, has been refreshing.

“Just to have that time with her in the afternoon is so important,” Hudson said. “Most days, she goes to sleep between 6 and 7. And to have those few hours with her is the best. When she’s at school with me, I’ll let her run around the gym once the games are finished and she’ll take all the basketballs off the rack. Our volleyball players would pass a ball around with her and play with her. It’s fun for me to see that she kind of is embracing my lifestyle as well. And of course, it makes me happy to see her pick a basketball up every now and then.”

Being the AD at Lewisville has give Hudson an even greater appreciation for all the work behind the scenes that must be done.

“I always saw it at West with our great athletic director, Mike Pennington, and our assistants Shannon Casey and Scott Bilton. You kind of see it through the lens of how it is impacting your team at the time. But you have a lot of balls in the air you have to manage. And with this being a new school, you are also developing an identity for your athletics program. You are developing rules, schedules, and procedures. You are getting all the coaches in place. You are ordering uniforms and scheduling bus transportation. It really has taught me a lot — budgeting, communication, fundraising and rolling with the punches. Because in this COVID world, you need to learn to roll with the punches and adjust on the fly. All of this has really helped me grow.”

From time to time, Hudson will also need to fill in doing various other athletics-related duties.

“I had to run the clock at a recent game, and I know I forgot to start it at least 20 times,” she said with a laugh. “Those poor referees really had to help me out. Because I’m just not used to being on that end of things. I found myself paying attention to what was going on out on the floor, thinking about adjustments I would make and what I would tell the team. I was still seeing the game through the lens of a coach.”

The coach in her probably wouldn’t have reacted too kindly to a slow-starting clock.

“The game I was slow on the clock brought back a memory for me during a state playoff game,” Hudson said, laughing. “Our regular clock operator wasn’t there and the fill-in, who is a great teacher and friend at West, didn’t run the clock for about two seconds and I absolutely lost it. That memory ran through my mind during that game, and I texted that teacher that night and told them that now, I understand the difficulty of it.”

Hudson admitted that she does miss coaching from time-to-time but is happy and content with her new life. She does still perform some basketball skills training with a few players, which she said helps her fill that void.

“Plus, I can do that around my family’s schedule,” she said. “I just want to soak everything up that I can with Sophia right now. And this new school and different schedule has really allowed me to do that.”

Hudson will celebrate her Hall of Fame induction with her husband, daughter, and parents on Friday night.

“It will just be a pretty special night for me and I’m glad we will all be able to celebrate together,” she said.

Tyson Adams, who grew up playing baseball, picked up…