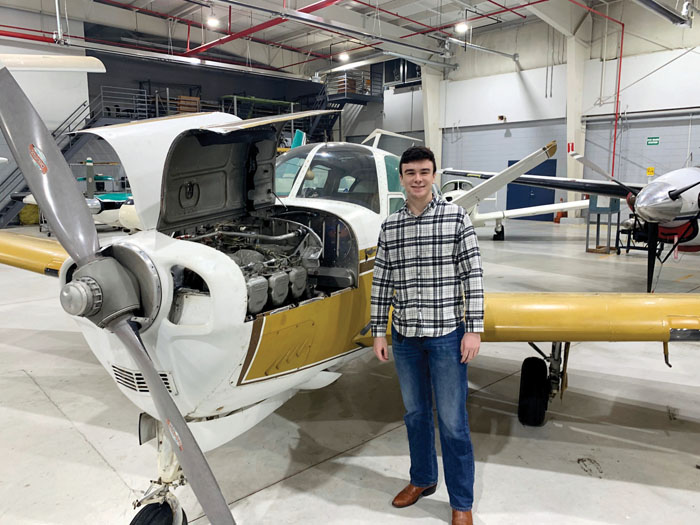 Owen Hopgood is an aviation mechanic at an airport in Beaufort, N.C.

Hopgood, who graduated from West Forsyth in 2019, was the first recipient of the Mason H. Hunter Vocational Education Scholarship of the Lewisville-Clemmons Chamber of Commerce and managed by the Shallow Ford Foundation. He used his scholarship to put him through the aviation mechanic program at Guilford Technical Community College, which he wrapped up in December.

He was able to find work immediately at an airport in Beaufort, N.C., following school.

And now, Hopgood has undertaken a brand-new endeavor by being one of the partners in an internet start-up, Blaster.

Hopgood is the chief operations officer for Blaster and is joined by his friends and classmates from West, Zack Prisk, the chief executive officer and Joey Cardwell, the director of sales. Prisk and Cardwell are both students at Appalachian State University.

Hopgood knows that his many connections in the area as well as a mentorship provided to him once he was awarded the scholarship have proven to be vital in his success.

Hopgood was paired with Mike McGilvary, a partner and financial advisor with Marzano Capital Group, during the scholarship process and their relationship has blossomed.

“I’m very fortunate and extremely grateful, first to the Hunter family for giving me an opportunity with the scholarship, and second, to Mike, who has been so helpful since I got the chance to meet him,” Hopgood said.

The Mason H. Hunter scholarship was born out of tragedy. Mason Hunter died of an accidental drug overdose when he was a senior at West. He had dreams of being a chef or going into law enforcement. His parents, Brad and Shauna, wanted to keep his memory alive by creating the scholarship for a local student who wanted to attend school on a vocational track instead of a four-year university.

“I think it was my mom that told me about the scholarship,” Hopgood said. “I looked into it and thought it was a great opportunity and in line with what I wanted to do as far as going to GTCC.”

From the moment McGilvary met Hopgood during the interview process for the scholarship, McGilvary knew that Hopgood had plenty of potential. “I got to know Brad Hunter really well and he actually became a mentor to me when I came to the area a few years ago,” McGilvary said. “And when the tragedy with Mason happened and the family started the scholarship, I felt called to get involved. I was the first committee chair. And Owen came in a fit the mold great. He interviewed great. His application was flawless, and you could tell that he had a lot of passion for the vocational track, which was basically what we were looking for to honor Mason. And so, my relationship with Owen came about because of a similar relationship I had with Brad. I wanted to pass that down.”

Once Hopgood and his friends came up with their new idea — Blaster is a service that helps to make communication more efficient across a range of social media platforms — he called McGilvary to run it past him.

“Mike and I have kept in touch periodically and I wanted to get his advice and help about getting the word out about Blaster,” Hopgood said. “He set me up a few meetings with the Lewisville-Clemmons Chamber of Commerce and introduced me to some people to network with and I was able to grow my base of connections. Being able to get in front of all those people really helped to get the word out about what we are trying to do with Blaster.”

Greg Keener, the program officer of the Shallow Ford Foundation, beams about the success of Hopgood and what the future holds for him.

“Like all of our scholarships, the Mason Hunter Scholarship is made possible by people in our community giving of their time and resources,” Keener said. “Owen is a great example of someone who found out about the scholarship, applied, and got the support of the community. Not only that, but he has connected with the community through his formal mentor and the new network that he has discovered from this. You love to see this success and how the community has embraced. He really took his opportunity and is running with it. I’m sure he will continue to take advantage of his connections and partnerships as he gets this off the ground.”

The application process for the Mason Hunter scholarship is currently open, as are opportunities for several other scholarships managed by the Shallow Ford Foundation. Visit its website at www.shallowfordfoundation.org for more information. A list of these scholarship opportunities appeared in last week’s Courier.