Tyson Adams, who grew up playing baseball, picked up indoor track this year 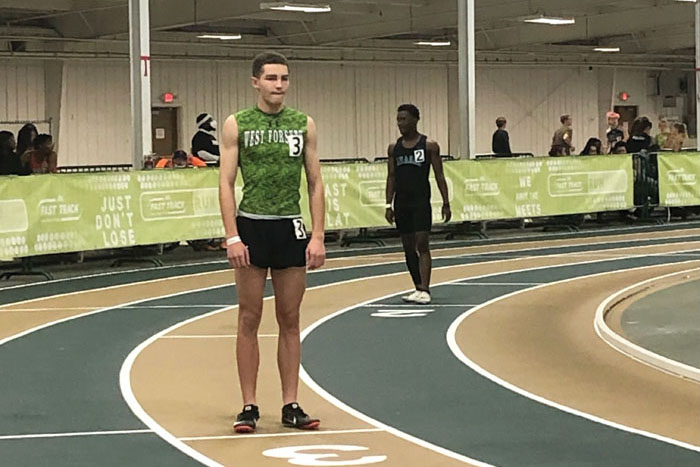 West Forsyth’s Tyson Adams won the long jump and finished third in the triple jump at the CPC track championship meet this week.

Tyson Adams grew up playing baseball and he decided he wanted another challenge this year.

Less than three months into his junior year at West Forsyth he decided he was going to go out for the indoor track-and-field team, never having run track events or competed in field events. Although he competes in the 55-meter run, the 300, the 4×200 and the 4×400, but his claim to fame has become the long jump. He’s evening testing the waters in the triple jump.

At 6-foot-1, Adams already has a jump of 23 feet, 8 inches, which is more than a foot longer than any other jumper in North Carolina this season. That mark also ranks eighth in the country.

“I’ve always (known) that I was fast and I could jump and everything,” Adams said. “And my dad’s always wanted me to go into track because he used to do track. And I was going to go my freshman year and try track, but it was during driver’s ed.

“And I didn’t really ask the coach (Nathan Newsome) for an extension, like an extension of time to go and do my tryouts when driver’s ed was over, so I never got to tryout my freshman year.”

Still thinking about track during his sophomore year, another wrench was thrown into his decision to not compete in track and field.

“With the whole COVID thing during sophomore year, it was just kind of a rough time to go and tryout for anything,” Adams said.

Because of COVID-19 last year, there was no indoor track. However, there was outdoor track and field last spring. But Adams chose to keep focused on playing baseball at West with Coach Brad Bullard.

Adams’ mindset about competing in track and field changed last fall. Problem was, Newsome knew nothing about him.

“We have tryouts,” Newsome said. “And you put up a sign-up sheet, and you put it in the announcements that anybody that wants to try out make sure you sign up. And the list is outside my (class) room. I’ll get 60-70 kids to sign up. That doesn’t mean they’re actually going to show up for the tryouts. You know, they just write their names down. He showed up, and the first thing we do is time people in the 55-(meter) dash. That’s really the first thing that we do.

“We run them two at a time, and I say, ‘Hey, just kind of run with somebody with like ability.’ And I time them myself. So, I go on their first movement, so they don’t have to worry about coming out of the block or anything because some of them have never done anything like that. Once they go, once they twitch and start moving, I start the clock.”

When Adams crossed the finish line, Newsome, who went to West Forsyth and track with Adams’ mom, Jan (formerly Doty), looked down at his clock and was flabbergasted.

“He was so much faster than anybody else I’d ever timed, I assumed I had made a timing error,” Newsome said. “But he was fast, and I was like, ‘Oh, my God.’ And then I thought, ‘Well, I went on his first movement and I didn’t say go.'”

Adams, whose father Jerome played basketball at High Point University, was also timed in the 300, and Newsome said he was “equally as good at that.” According to Newsome, Adams came up to him and requested to do the long jump.

“I guess I’ve just had a great beginners’ start,” Adams said. “I don’t really know what else to say. I am pretty raw right now. It’s my first time ever doing this and I have a lot of room to improve.”

Adams went down with jump coach Keena White, whose son, Ethan, is also a long-jumper at West. White’s daughter, Taylar, is also on the team.

“I think the immediate reaction was that he was a really raw athlete, but maybe not super-refined,” Newsome said. “We really didn’t know right away. And I was not there watching him try the long jump. And I don’t know if it was not being able to get the steps, or not really not sure what to do, but I was kind of like, ‘Why don’t we kind of really focus on running because you are super-fast?’ The learning curve for running is pretty short other than coming out of the block.”

One of the plusses to Adams is that he’s extremely coachable, according to Newsome.

“You had a couple things going. One is, he was very raw but extremely athletic,” Newsome said. “No. 2 is he says yes to everything just because he doesn’t know one way or the other. Three, he was new, so aside from the 55-meter dash and the long jump, which we didn’t know about yet, fitness is accrued over time.”

At a meet at JDL Fast Track early in the indoor season, Adams nonchalantly came to Newsome after he had finished the long jump.

Newsome wasn’t sure if 23-8 that Adams said he had was a legal jump, one where he had not fouled on the attempt.

“I said, ‘You have a legitimate jump at 23-8?,'” Newsome said. “And he said, ‘Yeah.’ And not saying I didn’t believe him, but I made short work of going over to the long jump pit, and one of our coaches was running the event. And he said, ‘Yeah, he jumped 23-8.’ He knew what I was going to ask. He said, ‘Coach, that was not his longest jump.’ He said his first two were well over 24. ‘That’s just the one that was legal.'”

The question is, what is next for Adams? Newsome said that Adams has the longest jump in North Carolina this season by nearly a foot and a half.

Also, Adams isn’t far off the school record of 24-2, set in 1976 by James Samuels, the father of former Mount Tabor star J-Mee Samuels, who ran collegiately at Arkansas.

The longest jump nationally in high school this season is 24-21/4 on Jan. 15 at the Virginia Showcase, set by Micah Larry, who started the season at Rolesville High School in North Carolina and has since transferred to Montverde Academy in Florida.

“I think I can get to that number because last meet my coaches said if I wouldn’t have scratched on the ones that I did scratch on I would’ve been out in like 24,” Adams said. “I was going for for the 24 mark, and my foot was barely over the line.”

Barring any unforeseen circumstances Adams is the clear favorite to win the NCHSAA Class 4-A indoor track-and-field championship at JDL next month.

“He’s not landing with his legs fully extended out,” Newsome said. “He kind of lands with his feet down early and kind of lands and squats. So, if he can really get better at the landing I wouldn’t be surprised (to break the record). He probably would approach 25 feet. Once in a blue moon in the state you’ll get somebody who’s really an anomaly and jumps that far.

“So, the fact that he’s a junior and his just kind of on the scene, it’s kind of all new.”

Once indoor track-and-field is over next month, Adams has big aspirations.

Newsome knows that dilemma all too well. While a student at West Forsyth, Newsome also played baseball and was on the track-and-field team.

“I told Tyson, ‘If you want to do both of them, that’s fine.’ I said it’s hard to practice both,” Newsome said. “What I did was just did baseball and came over and did (track). Could I have been better at track had I practiced all the time? Yeah. But I said that’s kind of a decision you need to come to on your own.”

Assuming Adams competes in both baseball and track and field in the spring, and with one year left at West Forsyth before he graduates, the sky’s the limit for how good he can be.

“I don’t have enough data yet,” Newsome said. “Logic would tell you he would get exponentially better, but he’s already so good. I think he will probably improve. I can tell you more, if he does spring track, and we see how he progresses in spring and see how that goes. Yeah, I would think he would get better.”

Even with all the numbers and wins Adams has piled up during indoor track this season he exudes humility.

“This would be great to do in college,” he said. “Hopefully I can get some scholarships.”