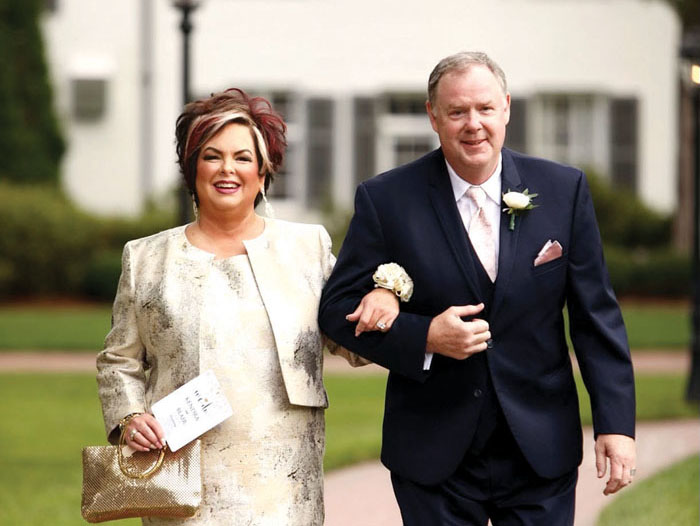 Beth Roberts is a true anomaly in North Carolina athletics. Roberts was raised as a Duke fan from a young age and eventually found herself cheering on the University of North Carolina at Chapel Hill Tar Heels later in life. “My sister and I have always been close, and we were raised cheering for Duke because our dad went to school there for college,” Roberts said.

Roberts enjoyed watching and participating in athletics as a young student herself. When Roberts was a student at West Forsyth High School she helped as a statistician for the girls basketball team. Roberts also was part of the Titanides dance team her senior year. “I loved my time as a Titanide. I relished being part of a group that encouraged the fans to cheer on their team,” reflects Roberts, who earned the superlative as the “Most Spirited Titanide” her senior year.

When Roberts graduated from West Forsyth in 1977, she chose to attend UNC and join her older sister. “It’s funny because I used to have a poster of Duke players in my room, and I felt almost disloyal cheering for UNC. It wasn’t until Michael Jordan came a year after I graduated that I readjusted my mindset and was able to let go of my inability to cheer on the Tar Heels,” she said with a laugh. While Roberts attended UNC, she considered several majors before deciding on industrial relations. “I thought that I wanted to get into the human resources field,” Roberts said. “It seemed like a business degree with a concentration in psychology too which was appealing.”

During her time at UNC, Roberts also was reintroduced to her future husband, Mark. “We had known each other throughout high school, and ended up together my sophomore year of college,” recalls Roberts. After graduation, Mark and Beth were married (and will be together for 40 years this year). “When I graduated it was a tough time to get a job. My dad worked for Piedmont Airlines. I started working for them and stayed with the airlines for 16 years in accounting. I enjoyed it because I did various things for them from recovering lost money to maximizing revenue per flight,” Roberts said. During the middle of Roberts’ career, she also became a mom to son, Blair, in 1988.

With the changes associated in the airline industry, Roberts went back to school in 1997 to get a teaching certificate at Winston-Salem State University. “I began teaching elementary students in 1999. After losing my job at the airline, I had recessed what I wanted to do. I had previously helped at my church, in teaching the youth group and enjoyed it tremendously. Teaching was something that I was drawn to. The first principal that hired me at Petree Elementary School inquired if I would be most interested in math. That definitely appealed to me with my background in accounting,” Roberts said. “Those were some of the best years as a teacher but also some of the hardest. A lot of my students didn’t have the best home lives. It takes an emotional toll on you when you see the obstacles they have to endure, and you can only do so much to help them. Because of those challenging home environments, you had to address why kids acted out and behaved in a certain way.”

After three years at Petree Elementary School, Roberts decided to teach seventh grade math at Northwest Middle School. “Seventh grade is an interesting age to teach. I loved the relationships I built with the kids,” Roberts said. “It mattered to me that they knew I cared. There are so many life lessons that occur inside those classroom walls.” Those life lessons were also imparted to Blair. “He came to visit my classroom often. I think a lot of my teaching characteristics were passed along to him. Blair even decided to be a teacher himself when he became an adult.”

Roberts’ influence, both with her own child and others, was appreciated by her former alma mater, West Forsyth. Roberts finished out her teaching career with there from 2007–2021. Roberts taught foundations of math I and math I. Roberts also was the assistant cheer coach from 2009-2013. “Cheering for sports teams has always been important to me so it was a natural fit. Cheerleading head coach, Daphne Marshall, and I took over as the West Wacko sponsors in 2010 for about eight years. Getting student participation in the West sports programs was important. I can’t take it when people don’t cheer at a game,” Roberts said with a smile. “Working with the cheerleaders to have cheers that involved crowd participation was a lot of fun.”

Roberts’ recent retirement earned superlatives as both a student, “Most Spirited Titanide” and as a teacher, “Most likely to tell a long (funny) story in the middle of class”
reflects the imprint and legacy she has made on her students.

“Now that I’m no longer teaching, I’ve been having some fun with my great love of fashion and accessories,” notes Roberts. “I have done some social media and advertisement promotions wearing clothes and accessories from Hip Chics. I have enjoyed myself with it and working with them.”

Roberts knows that the next chapters ahead will continue to be rewarding as long as she continues to challenge herself and focusing on what matters most.