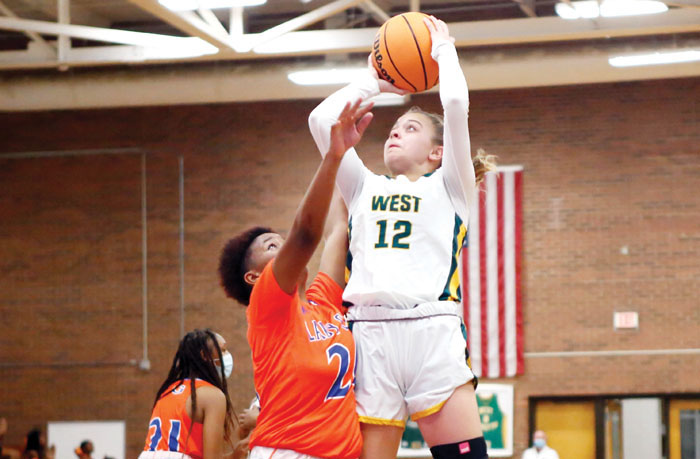 Abby Hunter shoots over a Glenn defender during a recent game. Photo by Brad Richard. To view and order photos, go to https://www.ncprepphotos.com/

A leader in sports doesn’t always have to be demonstrative. One can lead by example.

That’s exemplified in junior Abby Hunter of West Forsyth, who plays both girls basketball and softball. And in doing so for her first three years, both as a shooting guard on the basketball team and mostly as a centerfielder on the softball team, she’s making her mark as one of the top athletes in the Central Piedmont 4-A.

“People say I’m nonchalant,” she said. “If you watch a basketball game, if I get mad or upset, I just put that into the game. I just go harder to my opponent and I just start working even harder and try to steal the ball. And the same thing with softball. If something happens, I’m just going to run it off. I’m going to steal a base and get right back at them.”

Admittedly shy, as well as acknowledging that basketball is her second favorite sport, Hunter said that sports has changed her.

“I did end up loving (basketball),” Hunter said. “I was encouraged at first when I was younger in middle school (Meadowlark) and elementary school, but I ended up loving it. Once I got to high school, it was like, ‘I want to do this.’ Not forever, but for now. And it keeps me in shape, and it keeps me out trouble.

“But I love sports and they have definitely made me who I am today because they teach you a lot of things like respect and how to achieve goals.”

Coach Catrina Green, who is in her first season as the head coach for the Titans, immediately saw how valuable Hunter was.

“Abby is our toughest player. She is intense on both sides of a ball, but many times you can still see a smile on her face,” Green said. “She is willing to do the dirty work and put her body on the line for her team. She is coachable in every aspect and wants to do whatever is needed to help her team be successful.”

The Titans have needed that this season. Two seniors — Caroline Johnson and Emma Holowiti — have missed much of the season because of injuries.

“Every team has/will experience challenges throughout the season. With two seniors being out, our younger players have had the opportunity to step up in their absence,” Green said. “With upperclassmen there to coach and lead from the sideline we have been able to find success in our younger core.”

The Titans were 5-9 overall and 4-3 in the Central Piedmont 4-A heading into their games this week and have two weeks left in the regular season.

As a basketball player, Hunter has never wavered.

“I feel like I’ve gotten a lot more confidence in myself,” Hunter said. “My freshman year, I was shy. I didn’t handle ball pressure well.”

“There’s always room for improvement no matter what. That’s not what I just need. That’s for the team too. But you can always work on your conditioning. You can always better yourself and your ball handling, your shooting. And that’s one of the things I have to work on, as well, too, is my shooting because, you can always improve.

“You have a job, no matter what. Any sport, no matter what position,” Hunter said. “So, as long as you do your job and what you’re supposed to do and produce, then it doesn’t really matter.”

Although Kevin Baity has been Hunter’s softball coach at West during her first two seasons, he has had little chance to coach her. Her freshman season was stopped short after playing just six games because of COVID-19.

“I knew her when she was a baseball player before she started playing softball. I’ve been hearing about Abby when she was playing baseball and started watching her.”

“When you can play baseball, and that was a very good Little League All-Star team, also, at Southwest, that she played with,” he said. “She’s out there playing — pitching and playing short(stop) — the main positions. But I think the biggest thing with her is her competitiveness and her drive.”

Much of Hunter’s competitiveness comes from her work ethic. She’s in the gym or on the softball field seven days a week.

“Being a multi-sport athlete can allow a player to take their experiences from one sport and use them in the next,” Green said. “All coaches want their players to give 100%, be reliable, mentally tough, and a good teammate. Developing those skills in one sport can help propel you into the next sport and help you be a guide to other players that may struggle in those areas.”

Green understands what Hunter is going through.

“There have not been any scheduling conflicts thus far. I was a multi-sport athlete in high school and understand the impact playing multiple sports can have,” Green said. “With that, I emphasized to my players the importance of communication with their respective sport coaches.

“I never want to take an opportunity away from a player that is passionate about another sport. I also make it a priority to communicate with coaches directly when seasons may overlap. Each coach has been open and understanding and each player is able to play their seasons with no conflicts to the next sport.”

Coaches who observe other sports notice that as well.

“She plays similarly, as far as work ethic,” Baity said. “Wide-open. I haven’t been to that many basketball games this year. I think I’ve been to about three or four. And I just cringe because she throws her body all over the place.”

Although softball practice starts on Feb, 14, and West plays its first game on March 1 at home against Southwest Guilford, Hunter only has one thought on her mind — helping the girls basketball team win.

“I will finish out (basketball season) and do what I’ve got to do to be here because this is my first priority,” Hunter said. “So, I’ve got to focus on that and the team, and then I’ll go to softball and start practicing.”

Baity said he looks forward to coaching Hunter this season after finishing last season 6-8 overall and 5-3 in the Central Piedmont 4-A.

“She is one of the best I have ever seen in center field tracking a ball,” Baity said. “No question. The way she tracks off the bat there’s almost like she’s covering from left field to right field and everything in between.”

And Hunter’s presence in softball is going to be key after so many seniors from last season — Jessica Martin, Bella Flynn, Torrey Kridel, Bailey Coleman, and Amber Howerton — graduated.

The question is, since Hunter can play both infield and outfield, where will she play?

“I know what she can do,” Baity said. “The biggest thing now, is seeing what these others can do, and see if they can replace these other positions. Like I said, I’ve got several good freshmen, but everyone of them plays infield. If they could get the job done, I would love to leave Abby in center just because she’s so good at it.

“I know she would like to play the dirt (infield) more, and she’s very good there.”

The chance at playing multiple positions this season for the Titans is intriguing to Hunter.

“I’ll probably play center, but shortstop’s always up for grabs,” she said. “So, I’m going to work and get that because that’s my favorite position.”

Not only will Hunter be able to help the Titans defensively in softball, she has the ability to help the team offensively.

“Abby’s biggest asset is she has a lot of speed,” Baity said. “She does have power, but it’s best if she doesn’t use it. If she puts the ball on the ground, she has a very good chance of getting on base.

“And she’s pretty smart. I’d like to see her improve on understanding the defense and what the defense is giving her without me having to tell her, ‘Hey, the corners are back. Lay down a bunt and beat it out.'”

Although playing basketball will likely end after her senior season next year, she hopes to continue playing softball in college.

Hunter still has plenty to look forward to in the next year and a half before she graduates.