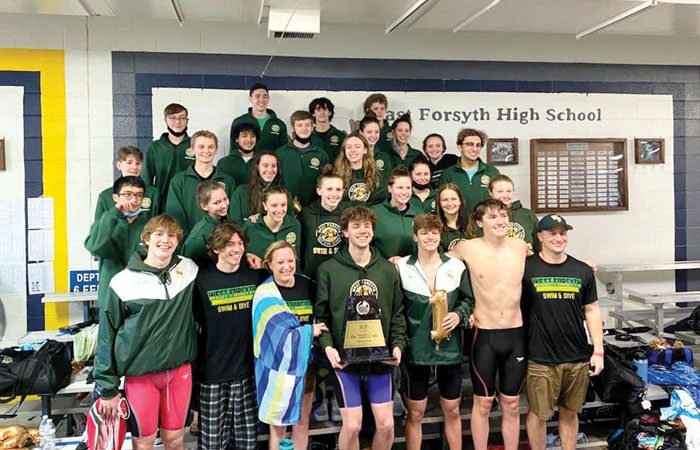 Submitted photo Coach Sandy Thomerson, wrapped in a towel, and her team are all smiles after the boys won their third straight CPC swimming championship

McDonald broke meet records in both his individual wins — the 200 IM and the 100 breast — and swan legs on two record-setting relay teams — the 200 medley and 200 free relays — and was named as the Swimmer of the Year in the conference. 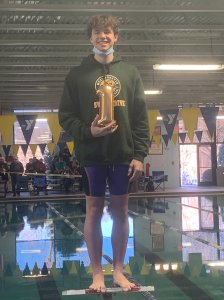 Submitted photo
Logan McDonald won two individual events and two relays at the CPC Conference meet. He set four new meet records and was named as the male Swimmer of the Year

Valliere won individual titles in the 50 and 100 freestyle races and joined McDonald on the 200 medley and 200 free relay teams. He also set a new meet record in the 50 free. His time of 21.17 seconds bested the previous mark of 21.64 set by former Titan Connor Greene in 2020. 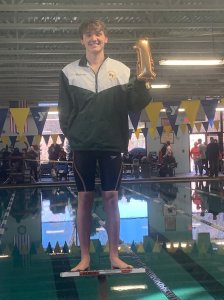 The West Forsyth girls finished in third place with 284 points and had one first-place finish from Katherine Perdue in the 100 backstroke. Perdue also finished third in the 200 IM and was on two relay teams that finished third — the 200 medley and 400 free relay.

Audrianne Frondoza picked up a second-place finish in the 100 fly with a time of 59.88 seconds.

Sandy Thomerson, who coaches both teams, was also named as the boy’s Coach of the Year in the Central Piedmont 4-A. 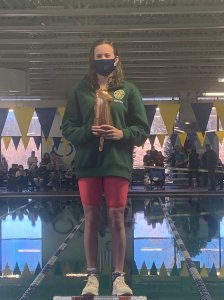 The Titans also had first place finishes by Jonah Greene (200 free) and Kyle Creep (500 free), and both Greene and Creep teamed up with Leighton Jones and Ethan Frondoza to win the 400 free relay. Greene and Creep also finished 1-2 in the 200 free.

Next up for the Titans will be the 4A Central Regional at the Greensboro Aquatic Center on Saturday, Feb. 5.