An incredible honor: Triad Honor Flight set to take off again in April 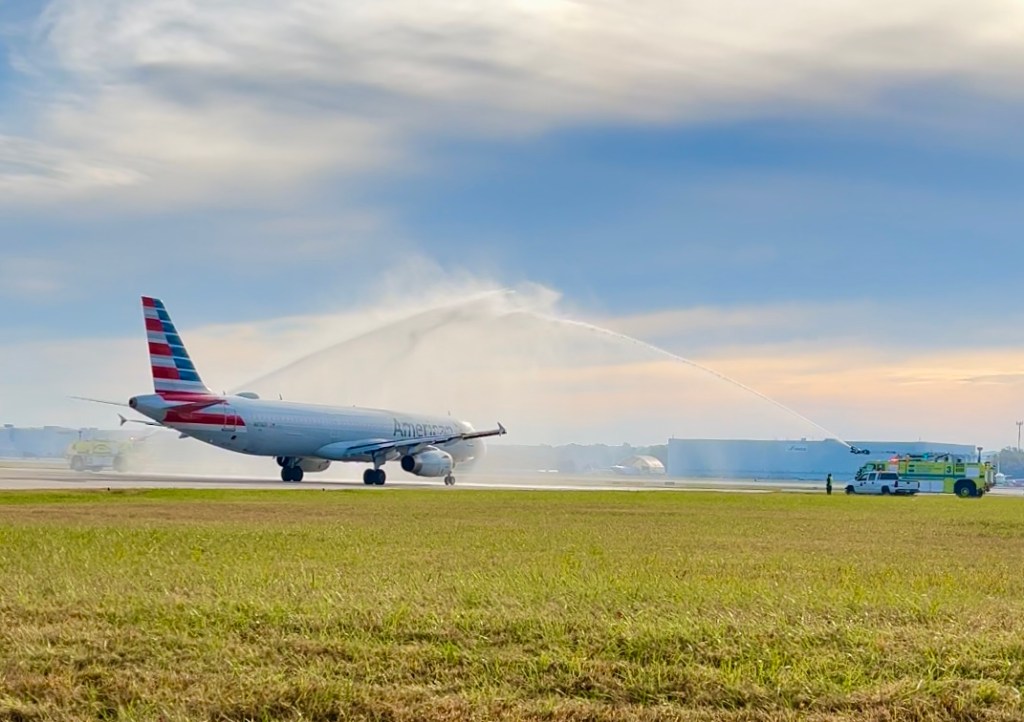 A recent honor flight gets a water salute. The next flight will be leaving from Piedmont Triad International Airport on April 27 en route to Washington, D.C.

There will be quite a collection of heroes on board a chartered flight leaving from Piedmont Triad International Airport on April 27 en route to Washington, D.C.

The second Triad Honor Flight will head north to our nation’s capital loaded with 90 veterans and their guardians for a day visiting the memorials for Iwo Jima, World War II, Vietnam, and Korea as well as a trip to Arlington National Cemetery.

There will be well-wishers to send the group off at the airport and to welcome them back home upon their return from the whirlwind experience that all takes place in one day.

It will be the second trip led by Triad Honor Flight, which organized another group on Nov. 11, 2021 — Veteran’s Day — the first flight of this type in a decade. There were several other flights from 2009-2011 that eventually ended because it became harder and harder to find World War II veterans, which was the original group targeted for the trips.

Triad Honor Flight is a dedicated group of volunteers from around the area who aim to give veterans all the praise and adulation they so richly deserve for the service they provided to our country.

There will be at least a dozen veterans from the Clemmons/Lewisville area on the flight in April, according to Alison Huber, who heads up Triad Honor Flight.

Huber is the daughter of a veteran and surprised her father in Washington, D.C., a few years ago when he went on his own Flight of Honor from a different state.

“A lot of us who are involved have that military tie in somehow,” Huber said. “We grew up in a military family, or we are married to someone who served, or in some cases, we are also veterans. We all want to see to it that we can do everything possible to honor these great men and women who served our country. The impact this has on them and on us is something you just can’t explain adequately. It is so profound. It is our honor to be able to provide this for them because a lot of them have never been to D.C. to see the memorials that are there to recognize their service. Some of them didn’t get the proper “welcome home” when they came back from the wars they were fighting. We want to be sure we can provide that for them.”

An undertaking such as this requires plenty of planning and logistical chess. There are plenty of moving parts and constant balls in the air. From securing a charter plane from a major carrier, to arranging charter bus transportation during the journey in D.C., to arranging an audience to welcome and greet at the airport and securing a medical team to travel along with a population that is aging, it takes a strong and dedicated commitment.

Huber and her volunteer staff are up to the challenge.

“She has this energy about her that is remarkable,” said Jackie Kohler, who is the secretary of the organization. Kohler is a U.S. Army veteran and grew up in a military family. She was also married to a veteran and has two sons who served in Iraq.

Kohler said that her involvement is personal on many levels, and it came at just the right time in her life. Shortly after the death of her husband, Kohler was driving down Lewisville-Clemmons Road and saw a sign in front of the Clemmons Country Store that said, “Thank a Veteran.”

It was a sign that Triad Honor Flight had been selling to help raise money to fund their trip last November.

“I knew I had to get involved right then, Kohler said. “Being a part of this has literally saved my life and given me purpose again. Being able to go on the trip in November and helping get things organized for it has been such a blessing to me. I saw that sign and immediately picked up my phone, dialed the number, and said ‘What do you need me to do?’ This is an opportunity to say ‘thank you’ to so many people who have touched so many lives, including mine. It’s the very least I can do.” 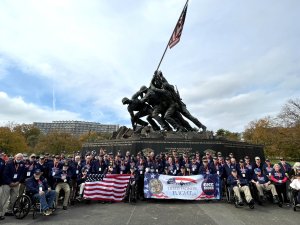 Veterans go on the trip at no charge to them. Each veteran has what is called a “Guardian,” who acts as the veteran’s personal escort/assistant during the trip. The Guardians pay $600 each to take part in the experience, and that fee is discounted to $450 if the Guardian is also a veteran.

Caitlin and Mark Linder of Lewisville served as Guardians during the trip in November. Mark served in the Marines from 2004-2008 and did two tours of duty in Iraq. Caitlin, who was aware of similar flights near her native Chicago because several of her friends participated, had an experience like that of Koehler’s as to how she found out about the flight in November.

“I was driving down the road and saw a sign on the road that said, ‘Thank a Veteran’ and felt like it was something I needed to do,” she said. “And with my husband being a veteran, when I told him about it and he said, ‘Well, I am a veteran, and this is something I definitely need to be doing.’”

Mark Linder was the Guardian for three veterans on the trip in November and enjoyed bonding with them during the trip.

“Every stop was just as memorable as the next one for them,” he said. “They all shared stories of their experiences. They got emotional at a few places. And because we were there on Veterans Day, there were so many people at the memorials anyway. Everywhere we went, there were other people just thanking them or saluting them. It was something I’ll never forget.

For Caitlin, she said the plane ride home brought out one of her favorite moments.

“The entire plane erupted in singing “The Star-Spangled Banner” and let me tell you, talk about an emotional moment,” she said. “I don’t think I’ve heard it as loud as it was then. And the amount of pride you could just feel in the cabin in that plane. It was just a really special moment. Something I’ll never forget.”

Huber said that one of the best surprises that happened on the November flight was mail call. Similar to when the veterans were serving in foreign countries or lands, mail call was always a highlight.

“We arranged for everyone of the trip to get cards and letters that we took with us that people wrote ahead of time,” Huber said. “Some of them were from family members and some were just from people and organizations in the community who wanted to help us. Everyone that went on the trip got mail and, in most cases, several pieces of it.”

The group had four charter buses taking them around D.C. in November. As you might imagine, there were times when friendly rivalries broke out between the different representatives of each military branch on the trip.

“They had a lot of fun with each other about who was better and why,” Kohler said with a laugh. “It was all in good fun. Sometimes, the hardest part of the trip was just getting them to settle down on the bus because they were going back and forth with each other.”

Organizers are already hard at work at fine-tuning the upcoming trip in April, working the phones to finalize the veterans who will be coming and securing the necessary Guardians.

“We have a pretty long waiting list for the Guardians, which is a really great problem to have,” Huber said. “I think it’s a real life-changing experience for them to see everything through someone else’s eyes who lived it.”

One of the World War II veterans who went on the trip in November died not long after the group returned.

“I was at his graveside service and found out he was buried in his Honor Flight jacket and hat,” Huber said. “To me, that’s the ultimate honor for us to be able to give back. And we fulfilled a dream of his.”

Triad Honor Flight is a 501(c)(3) and accepts all donations to help fund their operations. The Board of Directors take no salaries.

“One hundred percent of the money we raise goes right into funding the flights,” Huber said. “We wouldn’t have it any other way.”