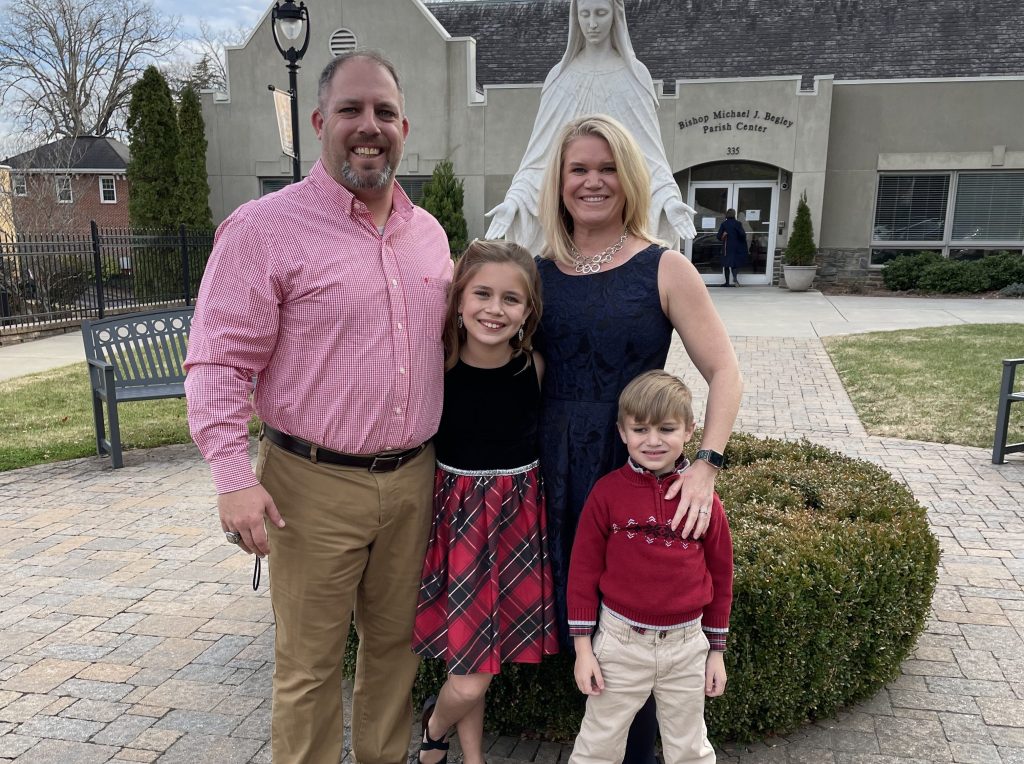 Marshall Canosa with his wife, Kati, and his children Jenna and Marshall

Marshall Canosa, a native of Pine Bush, New York, grew up living and loving sports. “My dad coached baseball at the high school, college and professional levels. Because of his job, we got to live overseas in Italy for a couple of years when I was younger,” recalls Canosa. Of course, as a young athlete himself, he embraced baseball. “I also played football, but from an early age I really enjoyed baseball,” he said.

It came as no surprise when Canosa was recruited to play baseball in college. “My grand plan was to attend West Point, but I ultimately decided not to,” Canosa said. He spent his first two years at the University of Akron before he transferred to Villanova. “I played baseball all five years in college while I studied secondary education with a concentration in social studies. I had toyed with the idea of going to law school briefly. However, deep down I knew that I wanted to coach and teach kids,” Canosa said. He appreciated having the balance of being a student athlete. Canosa started 54 of 80 games while at Villanova.

After Canosa graduated from Villanova, he was immediately hired as a graduate assistant coach at Tennessee-Martin where he helped as both the hitting and catching coach. Canosa was also tasked with executing the team’s strength program. After an impressive start in coaching, Canosa was recruited to work as an assistant with the Metro (NY) Cadets of the Atlantic Collegiate baseball league in 2003 and also coached for the Falmouth (MA) Commodores and the Yarmouth-Dennis (MA) Red Sox of the Cape Cod League in 2004 and 2005.

Canosa appreciated the experience he gained from his first few seasons in baseball. “I came down to Wake Forest University to help as an assistant coach for their baseball program focusing primarily on the catchers,” Canosa said. During Canosa’s four years at WFU he met his future wife, Kati. “I met Kati who was working at Wake Forest Baptist Health, and we kept running into each other. We realized we had a lot of things in common with our beliefs on faith, family and sports,” he said. “We planned to get married on Jan. 6, 2007, and to kick off the wedding we went to watch WFU play in the Orange Bowl four days before the big day. It was a really fun way to celebrate, and I loved that Kati enjoyed it as much as I did.”

The adventurous newlyweds decided to experience a new chapter by moving to Canosa’s home state of New York after they were married. “I had gotten a job at Hofstra University, and we stayed there for about a year before heading back to North Carolina,” recalls Canosa. “By that time, I had spent enough time in college baseball to realize I didn’t like the business side of it anymore. When we moved to North Carolina I coached and taught at several schools before I ended up at North Davidson. I have been at North Davidson now for 10 years,” he said.

Canosa is nationally board certified to teach AP world history and AP European history and of course is involved on the baseball coaching staff.

Canosa notes, “After years of coaching and becoming a teacher to other people’s kids, I was ready to have my own.” Jenna was born in 2011 and Andrew in 2017. “My parents raised me to be a good man but also a good father. I loved when my dad helped coach some of my sports team growing up, and I knew I wanted to do the same for my own children. It’s been fun watching them play the sports that you love, but doing it their own way,” Canosa said.

When Canosa isn’t helping coach or watch his kids’ sports teams, he’s partaking in other family activities. “I actually really like to cook. My schedule doesn’t always allow me to do it, but I do enjoy it. As a family we also like to travel when we can,” Canosa said. “As the kids get older too, we get to expand what we can do together, and I’ve loved the new adventures that we can take.”

As Canosa had to learn with the balancing act as a family man, he can likely relate to former San Francisco Giants player, Al Gallagher, “There are three things in my life which I really love: God, my family and baseball. The only problem — once baseball season starts, I change the order around a bit.”