Hoosier transplant: Cameron White fit right in this season at West Forsyth in the Tarheel State 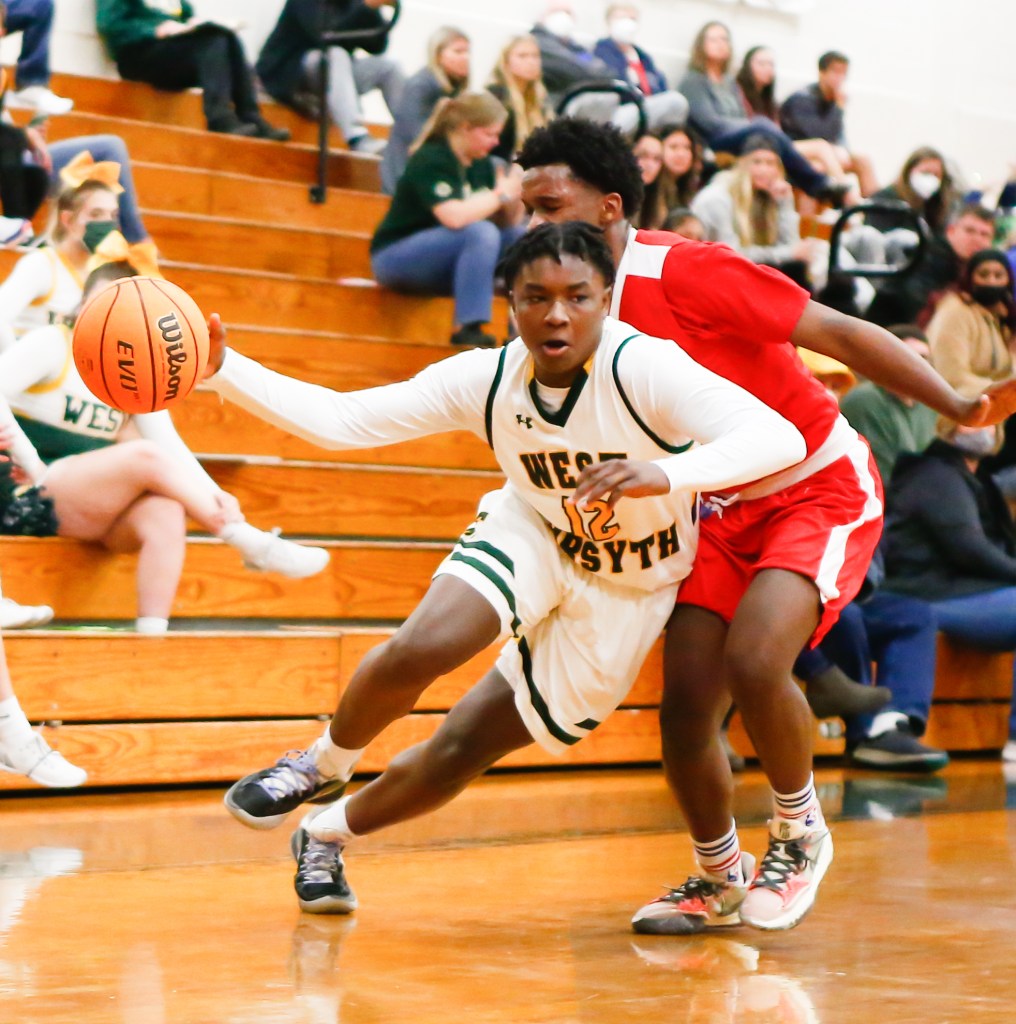 Photo by Brad Richard Cameron White, who moved from Indiana to Clemmons last summer, has found a new home at West Forsyth

Basketball is a passion in both North Carolina and Indiana.

For sophomore Cameron White of the West Forsyth boys basketball team, he has had the privilege of playing in both states.

“I played JV there (at Arsenal), then jumped to varsity my freshman year,” White said. “It was a great experience. We did pretty good that year. We had a strong, nice season.”

Now, he’s coming off the bench as one of the top reserve players for West, playing in a strong 4-A conference in the NCHSAA.

“It’s definitely a great comparison,” White said. “As far as competition, I think it’s definitely the same. And experience-wise, it’s all the same. North Carolina is a great basketball state as well.”

White said he averaged about 11-12 points per game last season at Arsenal. That experience in a basketball-crazed state like Indiana helped him lay the foundation of his basketball career before joining the team at West when practice started last fall.

“I love the environment at West Forsyth — my teammates and coaches, my teachers,” he said. “And I’m doing great academically.”

White missed all the summer workouts with the Titans but was eager to get going with his new teammates last fall.

“The funny thing is, one day I just heard on the announcements — I was really trying to find out when basketball tryouts were,” he said. “I just came in and just showed all my effort, and played my tail off.”

White was able meet with the team during fall workouts, but things started inauspiciously last fall on the first day of practice.

“It was not the great introduction because I’m doing a drill and he screws it up like three times in a row,” Coach Kevin King said. “And I’m like, ‘It’s not complicated. What’s going on?’

“But I don’t know if it was nerves on his part or a bad explanation on my part, but once he figured it out, he has been tremendous.”

Despite his mistake, White wanted to show King that he could play basketball.

“One thing I wanted to impress upon my coaches is my defensive effort,” White said. “I just show 100% every tryout. Coach King said he liked my play-style and he just put me on the team.”

Although 6-feet might be a stretch, White makes up for his lack of height in other areas.

“He gives away size,” King said. “I don’t think he’s going to grow any taller. But if he were 6-1, 6-2, and could more of a stretch position on the baseline, that would help tremendously.

“But he makes shots. He’s our best defender as far as anticipating — I’m sure he leads the team in steals — just because he anticipates so well.”

King grew up in North Carolina, with his father Ron being the legendary head coach at North Surry. King and White, who lived most of his life in Indiana, are similar in that they’re both basketball junkies.

Not only has White had to transition from Indiana to North Carolina, he’s had to learn a new city, school, teachers, coaches, teammates, and the culture. And he’s had to do this during COVID-19.

“And a lot of people just knew who I was and know my name. And my teammates, they got my name out there for me a little bit. And that was it.”

West Forsyth opened this season with an 85-76 home win against Forbush.

Being a sophomore, a player is going to have peaks and valleys.

“One thing (King) said was I always play with high energy, great effort, and he said I’m a good kid to be around, White said. “I’m just a good coachable kid.”

Dealing with the highs and lows of a game and season are what King is trying to teach White.

“He’s had those sophomore up-and-downs,” King said. “He’s had the games where all the sudden he heats up. Missed shot, made shot, whatever he just keeps playing to the next level. That’s the biggest thing.”

White’s ability on the court is one thing, but his personality has helped with team camaraderie.

“I can make anybody laugh,” he said. “In the classroom, I think I am an honor-roll student.”

In addition to the popularity of basketball in both Indiana and North Carolina, White has seen another similarity.

“Definitely the ethnicities,” he said. “It’s definitely the same. And I just like the environment, and I think a big difference is the weather, for sure. It’s too cold in Indiana.”

He has definitely made Clemmons his home.

“One thing I definitely like here, there’s definitely nice people,” White said. “People come over and say hi to me. When I wake up in the morning or when I walk around the neighborhood, it’s all cool. But it’s the same as Indiana. But I think North Carolina’s hospitality is definitely tremendous.”

“I think he has fit in real well,” King said. “That’s one of the things that I think has really helped this group is they seem to get along really, really well. This seems to be a group that likes each other.”

It’s been a frustrating season for King and the Titans, having just finished the regular season 7-16 overall and 3-11 in the Central Piedmont 4-A. The CPC tournament opened play on Monday night.

“And that (team chemistry) has not, in all the years I’ve been there, that hasn’t always been the case,” King said. “And I’ve had teams everywhere I’ve ever been that they could play on the court together, but off the court, they just kind of went their separate ways.

Even though this season has been a struggle for West Forsyth, White considers it an honor to have transferred to play at West Forsyth.

“It’s definitely great competition here. And I feel like playing basketball at West is definitely going to be special,” White said. “Ever since Chris Paul went here it’s a good legacy for the school.”

West Forsyth finished next-to-last behind Parkland in the Central Piedmont 4-A. Despite the team’s struggles, White saw plenty of positives.

“I felt like we could finish in the top-five of the conference,” White said. “When I first saw the team, how we played in the scrimmages, and how high the energy was in practices and effort. And we were backed up by some great coaches.”

However, the record is deceiving. West Forsyth was competitive in almost every game. After defeating Parkland 59-37 on Jan. 25, West Forsyth lost the final six games.

In the final five games, all conference games, the Titans lost by a combined 26 points, including losing the final regular-season game of the season last Friday, 55-53, at conference-champion East Forsyth.

“It’s a microcosm of the last five games,” King said. “I mean you go back to Reagan (a 55-52 overtime loss on Feb. 1 at Reagan), we’ve had overtime, Glenn, we were down 1 with the ball with a minute and a half to go. At home against Davie (49-41 loss on Feb. 4 at home), we were up, halftime we were down four or five points. In the third quarter, we’re in the game. Reynolds (62-61 overtime loss on Feb. 8 at home), and then (last Friday at East Forsyth), we had the ball up with under a minute to play.

“We could make the argument we could be 5-0 the last five games. So, for whatever reason we have figured out everything about the game. As far as competing it’s just, we’ve got to believe we can win. I told them, ‘Winning is a skill that you have to learn just like making a bounce-pass or just like making a free throw. It’s a skill. You’re not born just understanding how to win games at the end of the game. You’ve got to understand those things.

“Now, early in the season we weren’t in the position to win those games. Now, all of the sudden we’ve figured things out, we play hard. We still make some mistakes, but effort will overcome a lot of that.”

West Forsyth played at No. 2 Glenn Monday night in the first round of the conference tournament. The semifinals and championships of both the girls and boys tournaments will be played at West Forsyth. If Glenn defeats West Forsyth on Monday, then West Forsyth wouldn’t be able to play at home in the tournament in which it is playing host.

“Whenever this season ends, we’ll take some time off, but whenever we start back in the spring, (White’s) then got a chance to work with us,” King said. “You don’t fix things that people do weird in the middle of the season because you don’t have time to make the adjustments.

Even though basketball for this season is coming to an end, White is thinking about playing a spring sport. Practice for spring sports started this past Monday.

“I was thinking about playing sand volleyball,” he said. “I don’t know, though. I played volleyball in gym class. It’s pretty fun.”

Graduation for White is more than two years away, but he’s already thinking about the future. He wants to get a degree in sports marketing. saying he enjoys watching “NBA on TNT” with Ernie Johnson Jr., Charles Barkley, Kenny Smith, and Shaquille O’Neal.

“I just love basketball and stats and arguing and debating,” White said.

SWWG recognizes three area non-profits in annual ‘Give Back’…