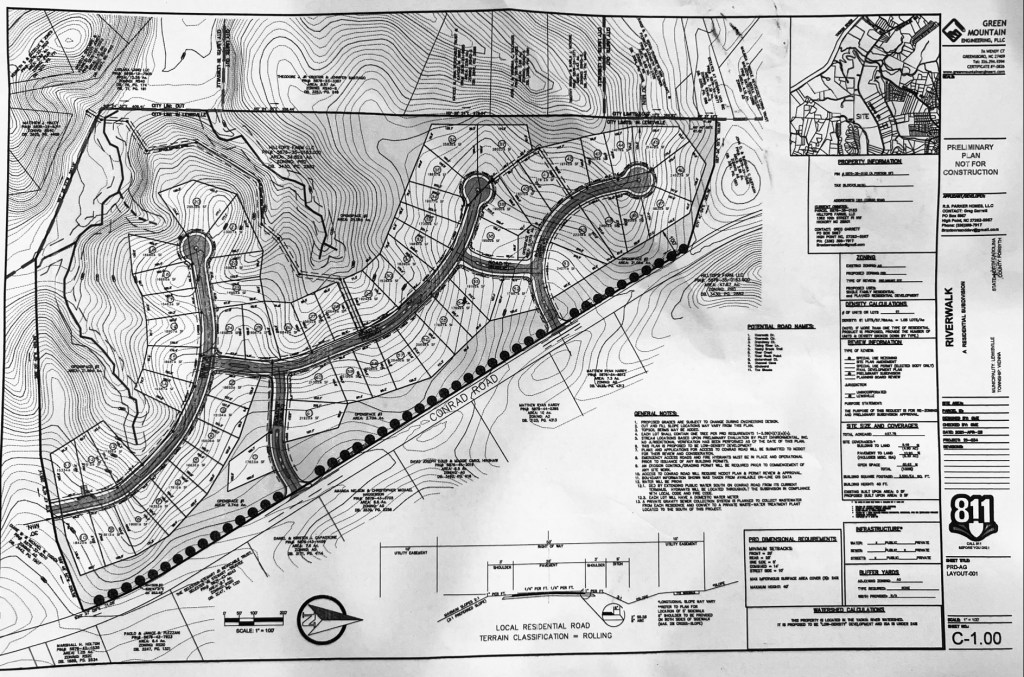 Submitted photo A developer has plans to build 61 houses off a stretch of Conrad Road in Lewisville, which concerns area homeowners

The town of Lewisville has been acclaimed for its ability to preserve historic landscapes and accentuate the beauty of the small suburb. One of the hidden gems in North Carolina, according to “Only in Our State,” is the tunnel of 100-year-old oak trees found on Conrad Road. Depending on which direction one drives down the road, the scenery showcases the vast fields that are harvested by local farmers in accordance to the current agricultural easement.

However, a developer has plans to permanently change that scenic landscape. According to Lewisville Town Planner Stacy Tolbert, the Lewisville Town Council and the Planning Board will be reviewing plans for a new subdivision off Conrad Road which would impact this historic section of Lewisville.

The proposed developer for this project, under the common name of Empire Homes/Shae Homes, has applied for a Special Use Permit to build 61 new homes.

Many Lewisville citizens, including Lissara HOA Vice President Rebecca Desai, were disappointed to hear that a proposal with this type of potential impact would even be proposed.

“I haven’t heard from one neighbor who was actually for this large-scale development, which would jeopardize the preservation of this unique part of land in our town. Lewisville should be a city that continues to focus on quality and not quantity. The devastation of this project includes road degradation, wildlife and agricultural disruption, and pure incongruence for the look and feel of this heritage section of our town,” Desai said.

“When we purchased our homes and land, we were informed by the family selling the land that we had to uphold the integrity of Conrad Road,” said one homeowner, who asked not to be identified.

“We also were told by them that any future sales of the land across the street on Conrad Road would be required to do the same. We can’t conceptualize losing such a beautiful part of our town.”

Other members of the HOA voiced the same sentiments, adding that the HOA has worked hard to maintain natural and aesthetic balances. They also expressed their concerns regarding the traffic safety that a development of this size and magnitude would pose on an already worrisome piece of road, citing recent several automobile and bicycle accidents in the vicinity.

Tolbert noted that the proposal before the town will require a Special Use Permit that would have to be approved by the elected body (Town Council) as per their Unified Development Ordinance.

“These hearings are quasi-judicial hearings in which the Planning Board and Town Council hear evidence in order to make a determination whether the plan is in accordance with the standards of the Unified Development Ordinance and issues specific findings,” Tolbert said.

“Once the case is heard before the Planning Board, they will make a recommendation to the council. The council makes the final decision.”

The Lewisville Planning Board will hold a meeting to review these findings on at 6:30 p.m. March 9 at the Lewisville Town Hall (6510 Shallowford Road).

It will be open to the public and masks will be required. Tolbert has asked that any questions or concerns be addressed to her via email (planner@lewisvillenc.net) prior to the meeting. In addition, citizens are encouraged to attend and have their concerns heard.