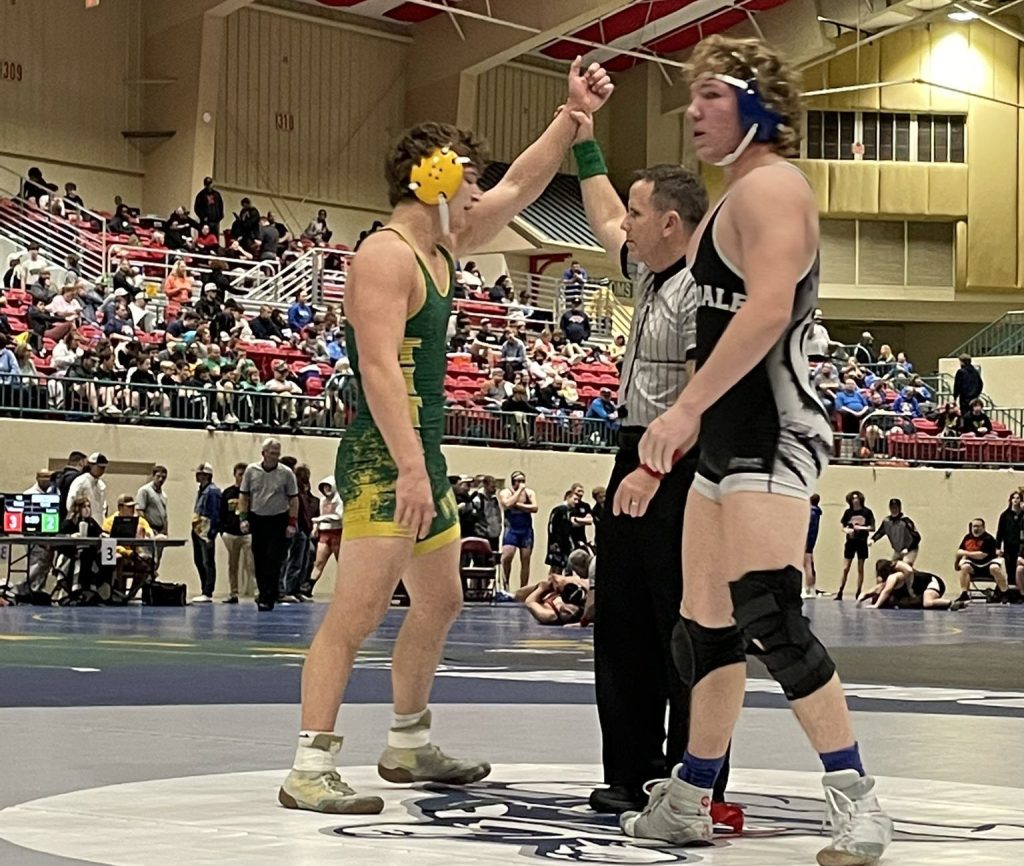 Tyson Adams, a junior who is in his first season participating in indoor track, won the NCHSAA 4-A state championship in the long jump last Saturday at JDL Fast Track in Winston-Salem.

Adams recorded a jump of 23 feet, 1 inch to ease past Jared Harrell of Panther Creek High School, who measured in with a best of 22 feet, 10.25 inches.

The West Forsyth boys finished 11th in the team standings with 16 points.

The West Forsyth cheerleaders finished in fifth place out of 40 teams at the UCA Nationals last weekend in Orlando, Florida.

The Titans, who have captured the last two NCHSAA state championships, competed in the Game Day Division.

Several members of the boys swim team performed well at the NCHSAA 4-A state meet last weekend at the Triangle Aquatic Center in Cary.

Alex Valliere was the top individual finisher, finishing third in the 50 freestyle with a time of 20.89 seconds and picking up a bronze medal.

Two relay teams also made podium finishes for the Titans, who finished eighth in the team standings with 91 points.

The 200-freestyle relay team of Jonah Greene, Logan McDonald, Ethan Frondoza and Valliere finished second to pick up a silver medal in a time of 1 minute, 25.67 seconds. That time also qualified them for All-American Consideration.

Two West Forsyth wrestlers made it out of the Midwest Regional last weekend to qualify for the NCHSAA 4-A state tournament, which will be held this weekend in Greensboro.

Aidan Meagher (195 pounds) finished second in his weight class to advance. Meagher won his first three matches by pin before losing a 9-1 major decision in the final to Sam Cowher.

Meagher will enter the state tournament with a 31-3 record.

David Eldridge (285) was also the runner-up in his weight class and will head to Greensboro with a 32-6 record.

Eldridge, who signed to play football at Winston-Salem State, also won his first three matches by pin before falling in the championship.

The Titans will enter the Central Piedmont 4-A Conference tournaments this week after wrapping up their regular seasons last Friday night.

The boys will enter the tournament on a six-game losing streak and a record of 7-17 and the No. 7 seed, but have played their opponents close in the last couple of weeks. The Titans dropped a tough game against regular season champion East Forsyth last Friday night despite leading for most of the game.

West defeated No. 2 seed Glenn in the opening round of the CPC tournament and played Mount Tabor in Tuesday’s semifinals.

The varsity girls will enter the CPC Tournament with a 7-13 record and the No. 5 seed and beat Davie County in the first round on Monday night, a team they split their two games in the regular season with.

The Titans will take on top-seeded East Forsyth in the semifinals on Tuesday.

The junior varsity girls finished their season on a high note with a 44-28 win against East Forsyth. Marissa Vernon led the Titans with 12 points, Nia Gary added nine and Sienna Ricciardi finished with eight. The team finished 14-3 overall and was undefeated in conference play.

Monday was the first day of practice/tryouts for all spring sports at West Forsyth, with games scheduled to begin later this month for baseball, softball, girls soccer, boys tennis, track and field, lacrosse (boys and girls), and boys golf.