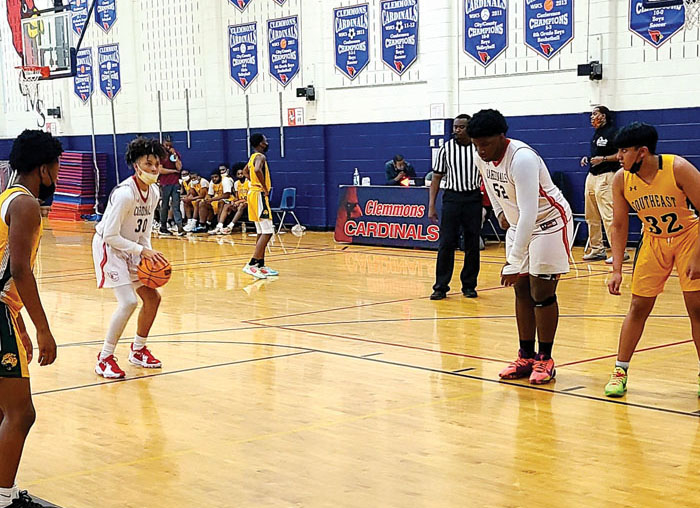 Cardinals down Southeast to advance to title game

The Clemmons boys varsity basketball team avenged its only defeat of the season and advanced to the championship game of the Winston-Salem Forsyth County Schools middle school basketball tournament on Monday.

Chris Gomez poured in a game-high 25 points and converted some key baskets down the stretch as the Cardinals pulled away for a 61-54 win against visiting Southeast.
Southeast beat Clemmons 32-29 in Kernersville in the first game of the season, the only loss for the Cardinals, who improved to 10-1 this season.

They will play the winner of the Northwest Middle-Jefferson game on Wednesday at North Forsyth at approximately 6:15 p.m., immediately following the middle school girls championship game. 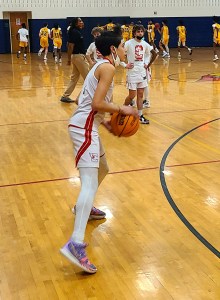 Marc Pruitt photo
Chris Gomez scored a game-high 25 points to lead Clemmons past Southeast and into the WSFCS Middle School Championship game.
The Cardinals will take on the winner of the Jefferson/Northwest game on Wednesday at approximately 6:15 p.m. at North Forsyth High School

The Cardinals stretched the lead to as many as 14 points in the third quarter before Southeast began chipping away.

On Clemmons’ next possession, Gomez and P.J. Dean, who scored five of his seven points in the fourth quarter, executed a perfect pick-and-roll that led to a three-point pay by Dean that pushed the lead back to seven at 57-50 with under two minutes remaining, giving the Cardinals just enough cushion to stave off a comeback.

Jordan Tate added 11 points and made several key plays during the second quarter that helped the Cardinals extend their lead. 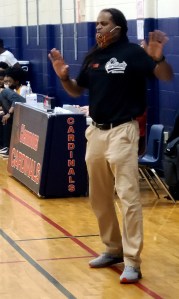 Coach Ron Forsh instructs his team during Monday’s win against Southeast in the semifinals of the WSFCS Middle School basketball tournament.

Coach Ron Forsh praised his team and their efforts following the game.

“We got to play with our whole team this time, and I think that made the biggest difference,” Forsh said. “We handled their pressure a lot better and didn’t turn the ball over nearly as much as the first time we played them, when we only had seven players. Our defense was good today, and we were able to rebound and limit them to only one shot. We did what we needed to do in the latter part of the game and just held them off. A couple of our guys were able to make some key plays for us down the stretch. Happy for them that they will have this chance to win a championship on Wednesday.”